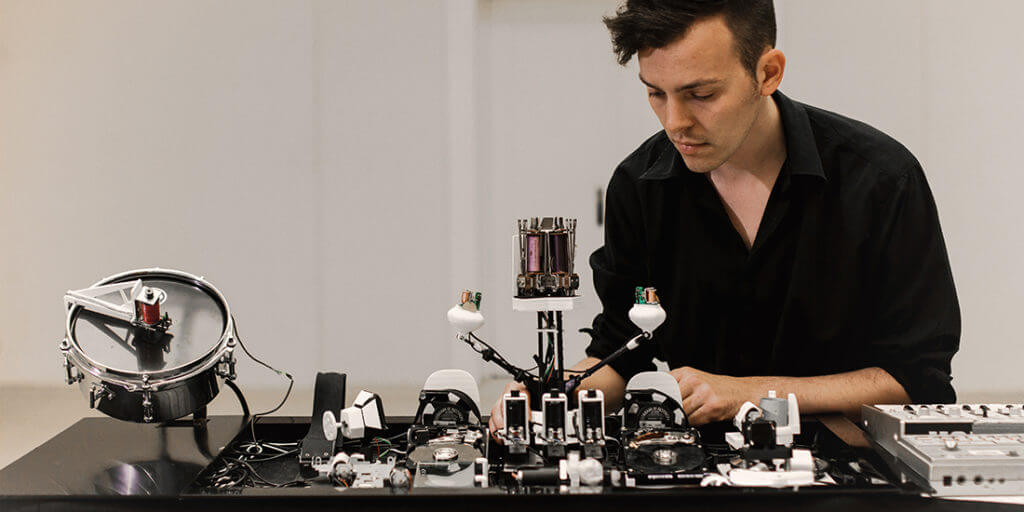 Kraftwerk’s enduring 1978 electro track “The Robots” depicted machines that were “programmed just to do/anything you want us to”—but those robots weren’t actually playing the music.

Forty years later, German musician, engineer, and educator Moritz Simon Geist is bringing the promise of musical automatons full circle on his debut EP, Material Turn (2018). Every sound on this unique collection emanates from one of Geist’s many homespun Sonic Robots.

Geist’s robots don’t spit out the rote bleeps and bloops usually associated with robotic techno music. Using struck glass, Styrofoam bubbles inside an air compressor, a metal-tined kalimba, and many other contraptions, the Sonic Robots create acoustic sounds full of texture and variation.

“They are slight, small differences, but no sound is actually like the one before or the one after,” Geist says. “Everything is changing all the time. It’s creating an organic sound world, which I really think people are searching for. Nothing is synthesized, so it doesn’t have that digital flavor to it. It’s like the comparison between a vinyl record and a CD.”

Classically trained on piano and clarinet as a child before playing in Krautrock and punk-rock bands for years, Geist studied and worked in electrical engineering before taking the leap into a creative life that merged his love for music and robotics. His first musical installation, 2012’s MR-808, re-created a famous drum machine as an oversize interactive instrument with robots playing acoustic drums.

Now, after several years of designing, testing, and reiterating his Sonic Robots, Geist has released Material Turn, with the full-length album Robotic Electronic Music to follow in November. Veteran electronic-music duo Mouse on Mars produced both collections and mentored Geist on the importance of achieving rich and characteristic sounds from his robots.

However, the acoustics continually present Geist with challenges unique to music-making robots. Of the many robotic concepts he attempts, Geist says about 60 percent of them fail due to unforeseeable physics that cause problems.

For example, to simulate the sound of hi-hat cymbals, Geist designed cylinders of compressed air that blow Styrofoam bubbles inside as they play. “The bubbles don’t make the sound,” Geist says. “The sound is made by the air pressure coming out. I just wanted to have a visualization of the air flow.”

But when Geist and his crew shot the video for “Entropy” over a two-day period, a static charge from the Styrofoam would build up, causing the bubbles to stick to the cylinders. They tried to insert some metal into the cylinders to discharge the static, but when that didn’t work, they had to constantly spray outside air into the superdry cylinders to make them more humid inside. “Stuff like this that you would never think of happens all the time,” Geist says.

His other big design challenge is making his Sonic Robots visually appealing for photos, videos, and the 40-odd live performances that he does each year. Geist makes his basic robots using Autodesk Eagle to design the circuit boards, but many of them are too fragile or visually sparse to leave his studio. For his centerpiece robots, Geist repurposes old hard drives, guitars, and other objects to supplement the parts he designs in Autodesk Inventor, then 3D prints or laser cuts with a CNC mill.

Geist worked with friends in a design firm using 3D printing and laser cutting to build the Tripods One installation, a suite of five musical robots, as his first major exploration of a visual aesthetic. “That was a big impact for me because I could go from crafting everything by hand, part by part, to replicating robots that do standardized things,” Geist says. “This whole maker thing and rapid prototyping totally make sense for me, and I use them all the time.”

With Tripods One and other projects since, Geist favors a “used futuristic” design over a superclean look. He says it’s more like the original Alien movie rather than Stanley Kubrick’s 2001: A Space Odyssey. “If you have a spaceship flying for hundreds of years in space, it will not look clean,” he says. “I mean, no way! So from then on, I tried to design my instruments like used future objects.”

With both sonic and visual aesthetics in place, Geist wants nothing more than to change people’s concept of electronic music—moving away from prepackaged, mass-produced sounds and toward the hacker spirit of deconstructing technology and then building it back up into something new.

“With the robots, I’m really opening the heart, and you can look deep inside the sound generation,” he says. “I want to look under the surface and see how things are actually made.”

For now, Geist composes and performs all the musical parts but—using software with the standard MIDI protocol—sends them to the robots to produce the sound. However, he says that he has ambitions of using machine learning to create an algorithmic composition for a “small orchestra of five robots that interact and play a musical sphere over several hours.”

At the intersection of art and science where Geist operates, he could easily lose the balance between the two, but he’s focused on serving the music with technology, rather than the opposite.

“My philosophy is that music should speak for itself,” Geist says. “You should not explain too much with words but just keep the mystic moments of the performance. Music is like a world on its own, and if it’s not really good, then the project is not good.”