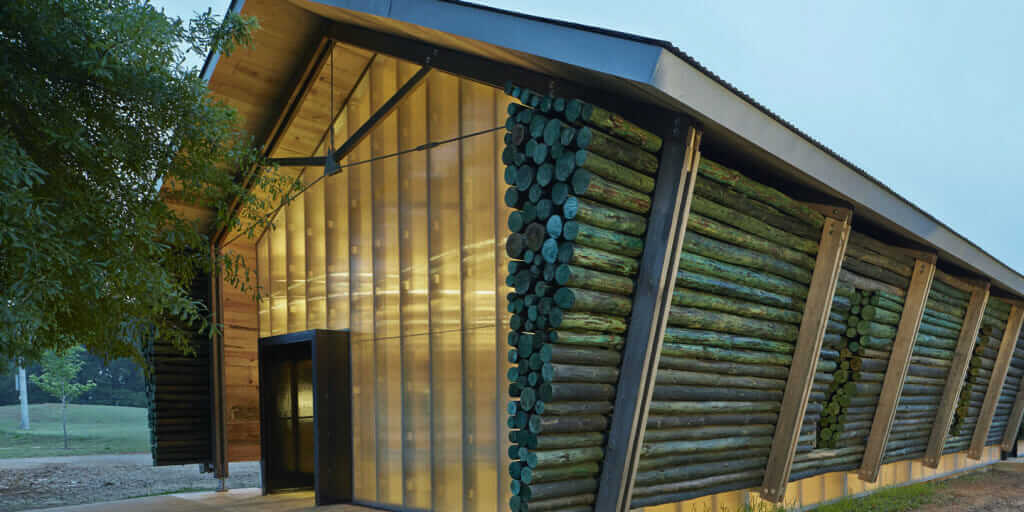 For more than 10 years, Rural Studio at Auburn University has taken on the challenge of building a fully functioning house and donating it to local citizens . . . for the total cost of $20,000. That includes building materials and construction cost.

The idea came from a federal housing grant that would provide first-time homeowners up to $20,000 for the construction of a new home. Rural Studio wanted to see if it could construct an actual home—one that isn’t a trailer—for that price in its corner of the world, Hale County, Ala.

While some of the homes built by the studio have gone over the $20,000 mark, the goal is to build a home with $12,000 worth of materials and $8,000 worth of labor and profit. The donor houses rely on materials available in the community and many design-and-labor volunteer hours from Auburn’s architecture students. Every nail matters. The discipline within the studio has been a great teacher.

The three homes in the 20K House Product Line have only one bedroom and measure around 500 square feet. They have big, overhanging roofs that protect the walls and houses from the Alabama sun. They also have tall ceilings so that the higher the ceiling is, the further away the real heat is as it rises. Natural cross-ventilation is key. Two of the houses in the product line (Dave’s House and Joanne’s House) have been appraised at upward of $40,000, mostly because of their efficiency of both materials and energy use.

Many look quite vernacular in the tradition of the antebellum South: long shotgun houses and dogtrots.

“We are very precise in the placement of windows of doors,” says Andrew Freear, the studio’s director, who became its design leader and conscience after Mockbee’s death in 2001. “Typically, we can afford two doors and seven windows, and how do you use those the fullest? Cross-ventilation, bouncing light, putting a window near a table as a reflective surface. In Joanne’s House, in the kitchen, the refrigerator is perpendicular to a window and bounces natural light into the space.

Freear says Rural Studio makes architecture out of everyday Americana—tall ceilings, ceiling fans, and porches “because of their public, engaging, and welcoming nature,” Freear continues. “None of this is rocket science. It’s merely looking at these older homes, how they are built, how they work, and why they’ve survived. Using the cool air in the space for natural ventilation works particularly well for our houses. We weren’t going for vernacular references; it’s what you can do with the sticks you have. The shotgun house was not invented and designed that way—long and narrow—because of how it looked. It was built like that because of the material available at the time.”

Each house is named after the person or family who it is given to (Joanne’s House, Dave’s House, Elizabeth’s House). While some in the architecture community have criticized early Rural Studio projects for being too “farm looking,” Freear explains that he and his students have to make a real home for someone. The house can’t just appeal to the architecture crowd. It also has to be accepted by the masses and raise the quality of house building, as well as the expectations of local citizens.

Rural Studio isn’t satisfied, however, at repeating these very-good-but-similar designs. Freear wanted the students to learn more from the houses and to come up with something that was iterative and relevant. Not just an alternative to the “ugly” trailers that would otherwise fall into the ground after 30 years.

Dave’s House, built in 2009, was featured in an exhibit at the Museum of Modern Art in New York. Its beauty is in its function. Dave’s monthly utility bills are $38. He has a wood-burning stove and well water, and its sustainability has added to its value.

“In the beginning, they were quite idiosyncratic, personality-based houses, and often quite experimental in form, shape, and materials,” Freear says. In 2013, Rural Studio expanded the scope of each house, adding larger two-bedroom designs that it believes will allow families to be able to live in the houses. The studio has come up with three house designs that it is tentatively calling a “product line.”

“We can actually get out of the academic research realm and create a real product that can enable people to better their lives,” Freear says. “We’ve hired a manager to roll out the project. The biggest challenge is, how do you keep the price down? How do you keep a builder—if he knows it’s worth $40,000—from asking $40,000? Especially when we know you can make a decent living charging $20,000 to build one. How do you stop someone from reducing the material quality?”

All the walls in Rural Studio houses are constructed using 2x6s with a minimum insulation requirement for tightness. No construction decision is frivolous. According to Freear, materials substitutions or corner cutting simply cannot happen.

“All the materials are working double and triple time,” Freear says. “Our floor joists span between girders and then cantilever beyond the girders. That helps the spans. If you span between two spaces, you need a certain depth of joist; it actually helps the middle of the span by cantilevering beyond. That cantilever lifts the span up in the middle. Very little of what we do is an aesthetic decision. It’s a material efficiency learned over so many years of doing this. It will last longer, be more maintenance free, and more durable. I always tell the students, ‘It’s a house for a gray-haired old architect. It’s workmanlike—there are no superficial additions.’”

Rural Studio is a member of the Autodesk Foundation, the first foundation to focus investment exclusively on the people and organizations using design for impact. Find out more about the field of impact design at Impact Design Hub.