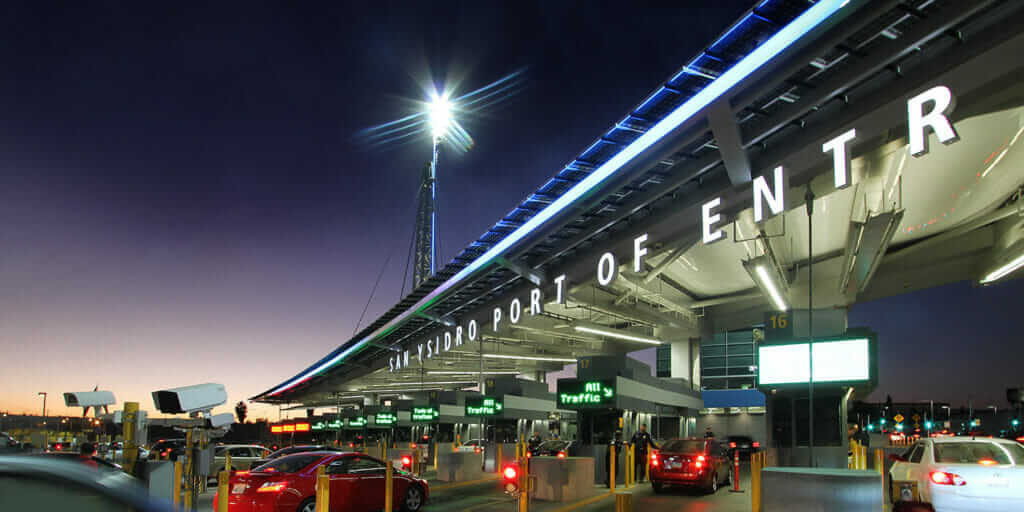 How a country treats its bordering neighbors says a lot about that nation. Recent budget proposals for the border wall promised by Donald Trump have reignited debates nationwide about how to handle the border with the US’s neighbor to the south.

Submissions to build the wall include a design covered with solar panels and one with embedded fiber-optic technology to detect people trying to cross illegally. But no matter what the wall looks like—whether it has feel-good solar panels or looks like a foreboding Roman defense wall—it is still a structure that says “keep out!”

In this global era, borders must be more than that. They also need to include points of entry and exchange where people and goods travel between countries. The renovated San Ysidro border crossing between San Diego, California and Tijuana, Mexico is the busiest such land border crossing in the Western Hemisphere. With an average of 50,000 northbound vehicles and 25,000 northbound pedestrians each day, the crossing processes more personal vehicles and pedestrians in a year than all other US-Mexico border crossings.

Miller Hull, the architect contracted for the renovation, and its client, the GSA (the General Services Administration branch of the US government) set out to create a more hospitable gateway for people coming from Mexico, while also meeting stringent security requirements.

“A border crossing is a necessary thing,” says Rob Misel, principal in charge of the San Ysidro Land Port of Entry project at Miller Hull. But whether it is intimidating and scary or welcoming and pleasant depends on the design. The original San Ysidro crossing was designed in the 1970s and is unable to keep up with the increase of travelers and the changes in security requirements.

“The crossing was made of concrete, and it had a massive and imposing element over where the cars were being processed,” says Casey Riske, the project architect at Miller Hull. “It was not welcoming at all. In fact, it had a very defensive feel and felt more like a corrections facility than a border crossing.”

The design team—which used Autodesk Revit for structural, MEP, lighting, and security, as well as AutoCAD for civil and landscape—was tasked with giving the crossing a major makeover in terms of the experience of its users, but they also had to make it function better. The original crossing was a fixed size, and was never designed to accommodate the large numbers of people that now pass through it every day. The crossing became so congested that at one point that before the renovation, travelers faced wait times of three or four hours.

The main goals of the renovation were to “protect the officers and keep the traveling public safe as they move through it quickly,” Misel says. “We wanted to create a facility that worked well for all its users. The new facility is designed to accommodate an 87 percent increased vehicle capacity by 2030.” And with improved flow of traffic, as well as better accommodations for staff operations, the current wait times at San Ysidro have dropped to an average of 30 minutes.

Part of improving the wait times was accomplished by separating San Ysidro’s functions. While primary inspections still all happen under the main canopy, secondary inspections are separated out, directed into a different canopy so as not to impede the flow of travelers. The head house, which allows officers to surveil the entire border crossing, is built above ground level, and the renovated detention center is underground. This helps keep the majority of travelers moving through while holding those that need to be detained in separate area.

“We used architectural massing in innovative ways to achieve our design goals,” says Riske. To begin, the design team used massing—which refers to how a building’s form and mass is perceived—to serve as a visual cue to give people an understanding of how the facility works at a first glance. “In a convoluted and visually confusing setting, the prominent and highly visible Port of Operations Building anchors the nearly 50-acre complex, with 100-foot masts extending from the elegant and arcing primary inspection canopy structure presenting as an iconic gateway,” explains a Miller Hull statement about the project.

The primary inspection canopy, which could be a dreary and mundane part of a border crossing, is the crown jewel of the San Ysidro renovation. The canopy is 850 feet long and is supported only at four points. Riske points out that “the minimal structure for the canopy is integrated with the inspection booths and therefore allows for a great deal of space for the officers to move about and do their jobs effectively.”

The canopy also features a distinctive art-in-architecture project by J. Meejin Yoon from Höweler + Yoon Architecture, which is incorporated into the leading edge of the shade structure and dynamically reacts through an animated LED lighting array to the movement of traffic approaching in each lane. “It serves as a gateway and provides a memorable marker for this access point into the country,” Misel says.

The team used an innovative product called ETFE (Ehtylene Tetrafluoroethylene) to achieve both cover and openness with the canopy. “Pillows of ETFE, filled with air, link all the canopies together and provide a lightweight means of enclosure, reduce the depth of the structure, allow for lots of daylight to pass through, and yet provide much needed shade,” Misel says.

Besides sheltering travelers from the sun, the canopy also provides relief for its officers from the heat and the toxic exhaust from idling cars. “Shading was a big requirement for the officers working in the intense sun all day,” Misel says. The translucent ETFE provides shade while also keeping the space well-lit, 24 hours every day, with a night-lighting system that bounces off the canopy. The canopy is also outfitted with an HVAC system that delivers a curtain of fresh air to cool the area down and offset the high CO2 levels from idling vehicles.

Another reason the design team overhauled the overbearing opacity and heaviness of the original crossing was to promote a sense of transparency. “We wanted to provide a window into the process with good visibility throughout,” Misel says. “The tilt and construction of the canopy maintain important sightlines for security, especially from the headhouse—as well as transparency for the travelers. And we made the flow of traffic more logical and easily understandable.” 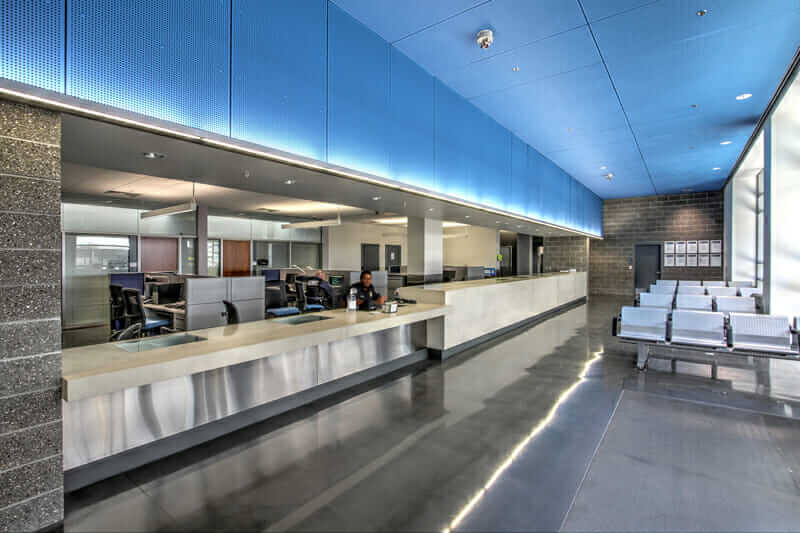 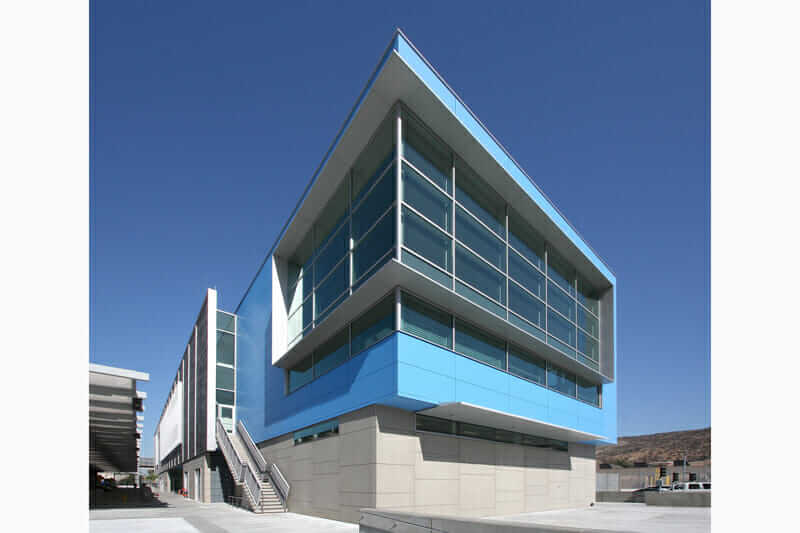 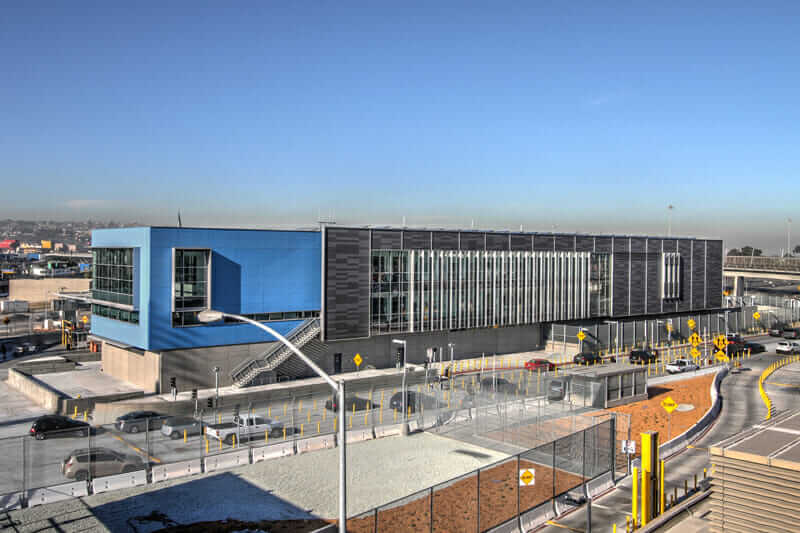 Transparency, and the concept of combining safety needs with openness in design, is how Miller Hull approaches all of its high-security projects, including embassy projects. “Security must be transparent,” Misel says. “The average traveler is just trying to get through, and the people in an embassy are just trying to do their business.” Though the security requirements for both border crossings and embassies are unyielding, the goal with both, he says, is to “create a welcoming space with the top-most priority being safety and security for all the users.”

The San Ysidro renovation, slated for completion in 2019, covers 450,000 square feet of built space and a whopping 150,000 square feet of canopy space. With its emphasis on innovative design and efforts to create a healthy environment, including a goal of being a net-zero facility, the three-phase project has achieved LEED Platinum certification for phase one and is targeting Net Zero for the entire project.

But what the team at Miller Hull is most proud of with the renovation, says Misel, is their role in “providing a welcoming face to the people of Mexico coming to the US.”