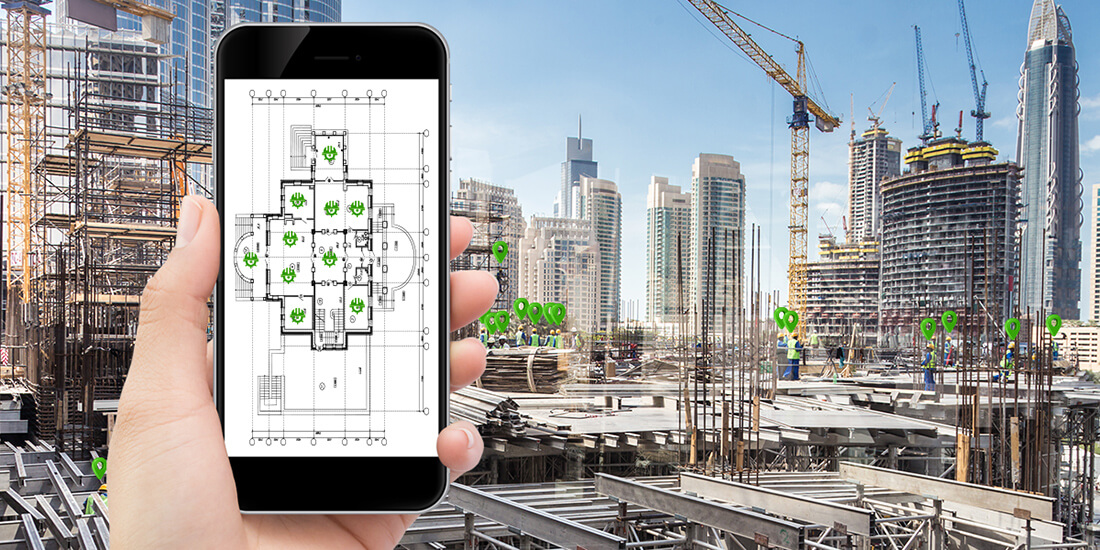 The simplest machine can often be the most useful—and if that machine arrives at the right moment, it might also become an unlikely hero.

WakeCap is a smart hard hat monitoring device that tracks the proximity of construction workers to each other with the goal of improving efficiency and safety. The company got its start solving a specific safety concern: detecting nodding behavior for drivers who are falling asleep—hence its name—but soon pivoted to technology for construction sites and similar applications.

When the COVID-19 pandemic presented a global public-health crisis and brought the economy to a halt, these simple data points turned out to be heroes for contact tracing on construction sites, adding a layer of safety for workers as the virus lingers.

WakeCap, launched in 2017, is a resident of the Autodesk Technology Center in San Francisco; from its home base in the city, the company works with multinational construction conglomerates such as AECOM, EMAAR, and Besix. WakeCap has active projects in the United States and the Middle East, where founder Hassan Albalawi hails from, and upcoming work in Japan and India.

This spring, WakeCap customer Besix discovered there’d been a construction worker on a 2,200-person site who had contracted COVID-19. With its monitoring capabilities, the company asked WakeCap: Can you tell us where this worker was on the site and with whom he or she came into contact? The answer was an easy yes, according to Daniel Pifko, WakeCap’s vice president for North America.

Because WakeCap had already begun to develop these capabilities, within a few hours, it was able to give Besix a list of everyone who had been in close contact with this worker over an extended time, as well as a map of that person’s movements across the site. To sort for possible COVID-19 contamination, WakeCap only had to run a new report.

“We can enter, in the case of COVID, a particular badge number, and it will give you a list of who’s been in contact with that person,” Pifko says. Next, team members looked at second- and third-order contacts (people who had contact with those the infected worker had contact with), which helped them accurately predict which other workers may have contracted COVID-19.

WakeCap also lets builders see if advised social-distancing precautions are being heeded and are working. “If I said to one of these companies beforehand, ‘Well, is that working?’ they would just get this blank stare—they don’t know,” Pifko says. “We can give them the answer to that. Are you actually limiting it to 15 people in this room? We can answer that.”

A Smart Hard Hat That Is Nonintrusive and Easy to Use

WakeCap’s hardware prizes low barriers to entry (requiring no training) and ease of use over complex functionality, monitoring only where people are and with whom they come into contact. The system uses no more than four components. Each worker has a small monitoring unit, weighing less than an ounce, that attaches to a hard hat’s ratchet knob. The unit contains an accelerometer that can detect falls and impacts—a key safety measure.

But in general, WakeCap is hands-off when it comes to intrusive safety warnings such as beeps (which the units can emit) because they can overwhelm an already noisy construction site. Using a button, users can report an emergency incident and/or signal that emergency messages were received. An optional card-shaped badge (which is not attached to the hard hats) also has this functionality.

A set of larger anchor devices are attached to building materials across the site, creating a mesh network that situates workers as units in space. These anchors also measure temperature, humidity, and air pressure, which offers builders more safety precautions for dangerous heat levels—and greater flexibility.

“If part of the jobsite gets too hot but part of it is still acceptable, you can send out safety officers to determine whether to close down just part of the site,” Pifko says. Without this kind of temperature monitoring, “either they won’t know how hot it is in that enclosed space, so they’re in extra danger, or the opposite will happen, where they’ll have just a couple of thermometers around the jobsite, and they’ll close the entire thing.” Finally, one gateway unit (essentially a small computer) on each site links all of the field units together and connects to the Internet.

To address privacy and security concerns, the gateway unit is the only element connected to the Internet (or to a power outlet—all other components are engineered for extreme battery life). WakeCap’s virtual site map is largely self-contained and is not connected to any other geolocation data—online or otherwise—using signal strength as a proxy for distance. There are no cameras or GPS receivers in the hard-hat units. “We measure the signal strength to the anchors that are placed around us using Received Signal Strength Indicator [RSSI] readings and then multilaterate the location of the hard hat,” Pifko says. “It is important to note that no tracking takes place once a worker leaves the project site.”

Although WakeCap comes with its own proprietary software that collects and displays location and proximity data, it’s designed to work with project-management software, emergency-notification platforms, and check-in and attendance applications. For the latter, registering when workers get to the site is a big leap toward the touchless communication that’s become necessary in the COVID-19 era. “There are no more punch cards, no more using a communal pen to sign in, or signing on a communal iPad,” Pifko says. “They just walk on the jobsite.”

WakeCap lets users import maps and models of the site and overlay and designate zones by location and function. These kinds of divisions can help builders minimize choke points, ensuring there aren’t too many people in a given area when social distancing is a key tenet of workplace safety.

Beyond COVID-19 concerns, much of WakeCap’s value lies in giving builders a better picture of how people are traveling across their jobsites so they can further refine processes for greater efficiency. Integration with project-management software means “we can slice and dice it by subcontractor or vendor,” Pifko says. “The general contractor can manage the work time and productivity for its vendors and subcontractors on a jobsite.”

These types of efficiency gains are relatively low-hanging fruit for the construction industry, which is both severely underdigitalized and dependent on labor costs (which can make up half of a typical construction budget). As such, WakeCap’s project-manager dashboard allows builders to examine what portion of time is spent in productive zones on the site, calculated per individual worker or team, and identify underperforming subcontractors instantaneously, all to avoid a negative impact on budget and timeline.

Looking forward, WakeCap is developing more artificial intelligence functionality to recognize patterns in worker movement to further refine efficiency. For instance, where are the most time-efficient places to locate tool sheds and break rooms? In the Middle East, where WakeCap does much of its work, where is the best location for daily prayers? In the case of COVID-19 containment, WakeCap could forecast instances of potential infection and suggest site-circulation constraints to discourage harmful interaction patterns.

Going from detecting fatigue on the job to locating workers in a space might not be an exponential upgrade in technical complexity, but the lack of intricate hardware is key to WakeCap’s value proposition.

“Understanding the trade-offs when you’re dealing with any Internet of Things implementation is key to making the whole thing work,” Pifko says. “I see other solutions talk about how great they are, but there’s, say, only a two-week battery life before you have to recharge them.” Each WakeCap smart hard hat unit has a battery that lasts for more than a year—long enough to hopefully outlast the virus and grow a foothold in the marketplace.