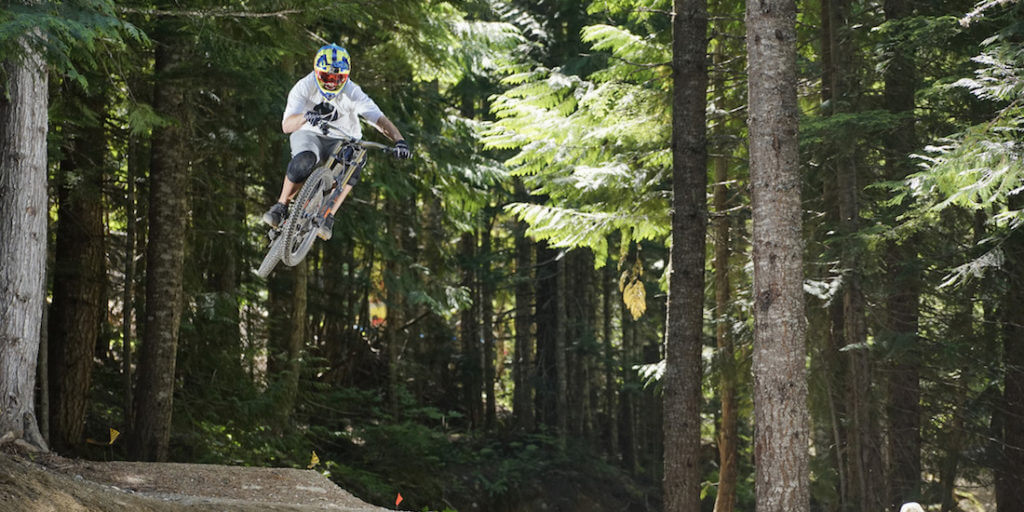 In the first episode of Friday Night Lights, a high school quarterback suffers a paralyzing spinal-cord injury (SCI) on the football field. As his community struggles to absorb this devastating blow, the show’s oracle, Coach Taylor, intones: “Life is so very fragile. We are all vulnerable, and we will all at some point in our lives fall—we will all fall.”

According to a 2016 article in the Journal of Spinal Cord Medicine, researchers have identified countries with the highest incidence of SCIs that are sports-related (Russia, Fiji, New Zealand, Iceland, France, and Canada) and sports with the highest risk (diving, skiing, rugby, and horseback riding). Although there are many mandatory helmet laws worldwide for bikes and motorcycles, almost no standards are in place for spine protectors—or recommendations for their use in sports.

Most spine protectors are made for motorcyclists and are variations of belts or armor that restrict movement or absorb blows. But a new project out of Graz, Austria—the Rotational Spine Protection (RSP) System—acts as a “second skin” with straps and buckles that fit onto the body and “lock” movement inside a certain range, keeping the wearer in a green zone of safe motion. If spinal rotation enters a critical range, the tightening straps capture and absorb the excess rotational energy.

Cofounder and CEO Thomas Saier of Edera Safety, the design studio behind the RSP System, studied medical surveys of spinal injuries, determining how and where they occurred, as well as the type. Under the in-house brand name adamsfour, the team concentrated on rotational injuries, which are five times more common than direct spinal impacts.

“It’s a biomechanical injury,” Saier says. “The natural range of motion is overaccentuated. Injuries happen when the rotational force to your spinal cord, which is centered in the middle of your spine, is getting torn or sheared apart.”

Step one was discerning where potentially damaging forces exert themselves on the spine when the body moves in extreme or sudden ways. The team had to develop its own crash-test dummy with sensors and a spine that rotated properly, apply rotational forces in every direction, and gather the resulting data.

The team concentrated on the vertebrae joining the thoracic-lumbar and lumbar-cervical regions, where most rotation—and injury—occurs. It also referenced human spines from cadavers with the University of Graz Institute for Anatomy, applying rotation and taking 3D scans to collect more data on the spine’s biomechanical range. 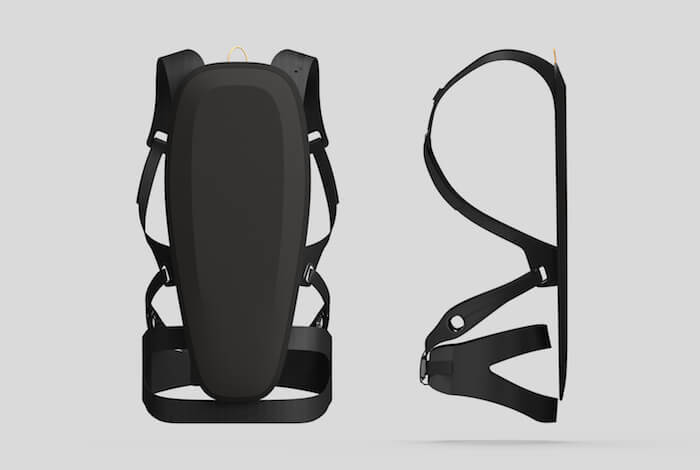 An iteration of adamsfour's design for the Rotational Spine Protector. Courtesy of Edera Safety. 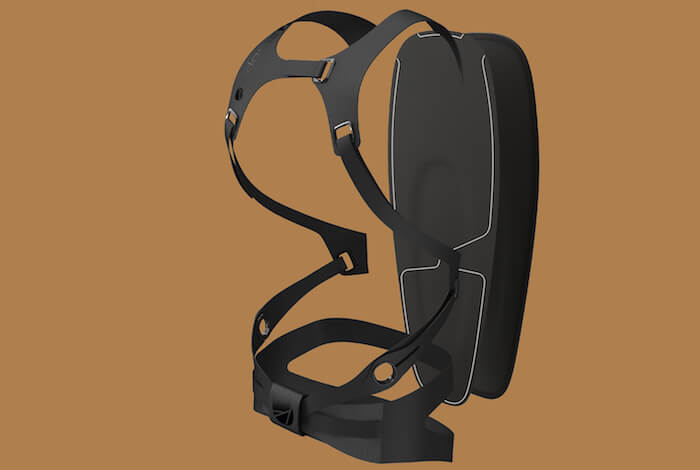 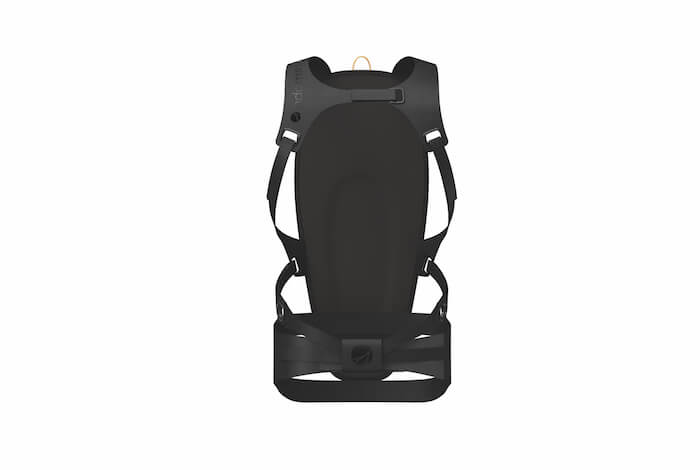 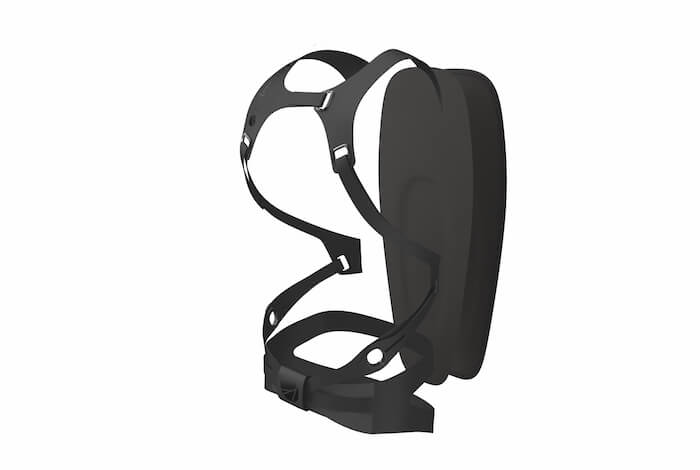 A critical discovery was the spine’s natural limits with two types of movement: one managed by the body’s musculature and one where connections between bones (including vertebrae) start to take on the load. The human body can reach only about 60% of its range of motion using active muscular force—the rest is done passively through bone movements such as spine rotation.

So the trick was not to restrict the active movement made by directing muscles, but to put the brakes on when the passive bone movement is too much. When the spine enters that critical phase, the RSP System absorbs the resulting force.

Step two was putting all the data about spinal movement into practice, designing a system that restricts simulated force and energy but doesn’t feel like a suit of armor.

Enter generative design. Saier was aware of Autodesk’s 2016 work with Hack Rod, a performance race car with a chassis created using generative design, and considered its applications for RSP. “If you just work on the test pad, you can only simulate one kind of movement,” he says. “Sports are such a complex thing with so many variations of movement—you don’t know how much force, rotation, or disruption really occurs in your system until it’s out there taking impacts.”

Using Autodesk Fusion 360 to fill the simulation with the real-time data, adamsfour developed a prototype. The team put it to work, integrating more sensors and an app to accurately measure and record all relevant forces and then feeding it into the generative-design algorithm.

For René Stiegler, adamsfour’s resident sportsman and designer, the next step was working with the geometries from the generative-design process to find the best solution. “The results we got were a bit too extreme to be sold as a product,” he says. “For usability issues, you have to reduce it into something people actually want to wear.”

The RSP System is a business-to-business technology—adamsfour will sell it as a kit to other manufacturers to be incorporated into their own products. Even though adamsfour is in the preproduction stage, it is already finalizing contracts with three large sportswear brands.

“Depending on the constraints, you get a lot of structural proposals out of it,” Saier says. “Generative design produced the key image, and the final product we’re using right now was driven by that geometry. You need to combine it with your intuitive know-how and the development skills of the design team to transfer it into a commercial product.”

One advantage of this process was reducing the amount of material needed, based on the system’s calculations for where the lines of force and energy apply to the body. “Without it, we might have had more material, or it might have been heavier,” Stiegler says. “It basically gives us the answers about the amount of load we have to carry or how thick the material needs to be. It’s your decision how you implement it in the final product. It’s actually based on a skeleton to build the entire system around.”

The next phase is to equip a larger number of test riders with more sensors, which will generate even finer detail and then regenerate the current design to refine the topology further.

In the Real World

After all that simulating, data crunching, and finessing, does the user experience stack up? Is the device easy to put on, comfortable, and effective?

The right material was crucial. It needed to be cuttable and shapable without losing its intrinsic strength and required appropriate friction with the surface of the skin or clothing. If the device slides around on a sheer fabric or sweaty body, it won’t restrict sufficiently. The answer was a substance called “chlorosulfonated polyethylene synthetic rubber,” similar to the material used for rubber dinghies.

“It’s comfortable to wear,” says Dominik Doppelhofer, adamsfour’s downhill mountain-bike test rider. “Compared to other back protectors, it’s a little bit different to put on. You have to adjust it properly because it has to sit on your body like a skin, but it works really well.”

This all means that if you play sports and find your spine better protected from overzealous twisting later this year, you might have anatomical research, generative design, and a small company in Austria to thank.