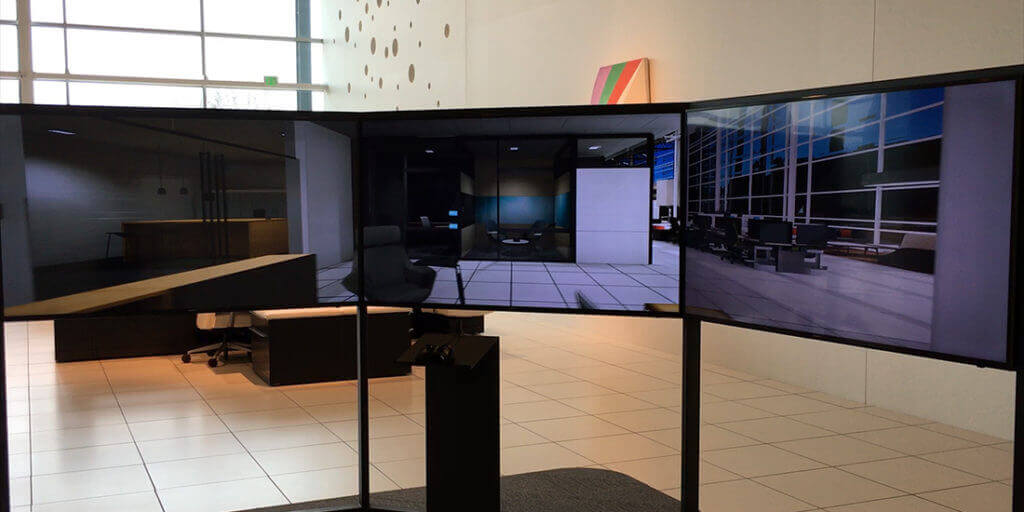 The word innovation doesn’t usually bring to mind wastebaskets. But back in 1914, a Grand Rapids, Michigan–based furniture company received a patent to make something the world had never seen: a strong, durable, fireproof, low-cost wastebasket.

More than a century later, Steelcase is an architecture, furniture, and technology products provider with 60,000 products and 20,000 finishes on offer. And a culture of innovation has remained core to the company since that first patented design.

The latest Steelcase design advance is a virtual one—a new innovation to help design, assemble, and market its products. “When you tell customers, ‘This is a small office, this is a small hallway, this is a big hallway,’ they have a really difficult time understanding the space,” says Steelcase’s Steve Goetzinger about traditional architecture plans.

As senior consulting applications engineer and resident innovator, Goetzinger gathered his team to solve that dilemma by designing a 3D space and bringing it to life using virtual reality (VR). Called Virtual Office Space (VOS), the system fosters the culture of experimentation and advancement that is baked into Steelcase’s DNA.

VOS started as what Goetzinger calls a “fairly flat” environment, but then his team began to experiment, gaining understanding of the functionality organically. “As we started to test, one of the things that we did right was, we started to iterate,” Goetzinger says. “So we started to add plants and people to understand how it would change the interaction.”

Window to Another World

Instead of headsets or other fancy technology, VOS is made up of three 70-inch monitors, with the outer screens angled in about 40 degrees to fill the user’s peripheral vision. “As we got several architects and designers in front of these screens, we noticed that they would start pointing and talking, and the technology would melt away,” Goetzinger says.

When the team presented VOS to the board, the members were won over. After that, the priorities shifted to reducing the cost and effort and recruiting partners to provide the best software solutions. Aside from building a virtual world in which architects, customers, and Steelcase employees can collaborate cheaply and quickly before a single nail is hammered, VOS also has the potential to get rid of a lot of paper—and bridge the language barrier. Goetzinger has already begun experimenting with this, using Autodesk Forge, through 3D assembly models.

“With 60,000 products, as you can imagine, we have a lot of paper,” Goetzinger says. “We have seven languages that we can support for any one product. The 3D assembly instructions for a chair have no text; it’s a 3D environment in a webpage. If you don’t see something—a bolt that goes in the side, whatever—you simply rotate the object and play it again. I joke that a picture is worth a thousand words and that 3D is worth a million words. It’s an amazing process, and it’s starting to augment how we train our installers.”

So apart from the wow factor, what—as investors or shareholders will invariably ask—will VOS do for the bottom line? First, it could mean the potential end of manufacturing and shipping prototypes to client locations for review. And because the product information is all digitized and recorded, who knows what kind of big data can be applied to isolate themes or preferences no human designer or architect would have spotted?

Plus, excitement about new technology keeps a company’s name uppermost in users’ minds (just ask Apple), solidifying its reputation as a technology leader and putting it in a tangible and actionable market position.

Goetzinger tells the story of a Steelcase event where 800 people from the North American dealer network were told they would get a tour of the Steelcase Innovation Center, a top-secret location that contains all the company’s intellectual property. What the dealers weren’t told was that the tour would be completely virtual. But everyone was so impressed with VOS, there wasn’t a single complaint that they weren’t looking at the real Innovation Center. Instead, the conversation was about how they could access the technology for their own clients.

There’s another surprising element that explains why a virtual view of your future workplace is effective: gaming. Steelcase developed VOS with partner companies that work in a gaming environment, and Goetzinger calls VOS one of the biggest games around—it comprises 60 GB of data and is run from what’s essentially gaming software and servers.

“The first time we showed many of our test subjects, we got questions like, ‘How do I get my axe or grenade?’ and ‘How do I blow up a chair?’” Goetzinger says. “We joked that at some point we should do that just to be funny, but in reality, it’s the same functionality, it takes the same movements and the same understanding. Watching folks go through these Innovation Center tours, pointing at the screen and talking to each other, you understand it’s a significant emotional event that they’re able to tour a space without ever having to get on a plane or sign some waiver.”

That could be the inciting factor to making the sale. Any consumer marketer will tell you emotions (rather than reason) drive many purchasing choices, and the emotional connection users feel to a real-life environment is impossible to achieve from a set of 2D blueprints or an instruction manual. 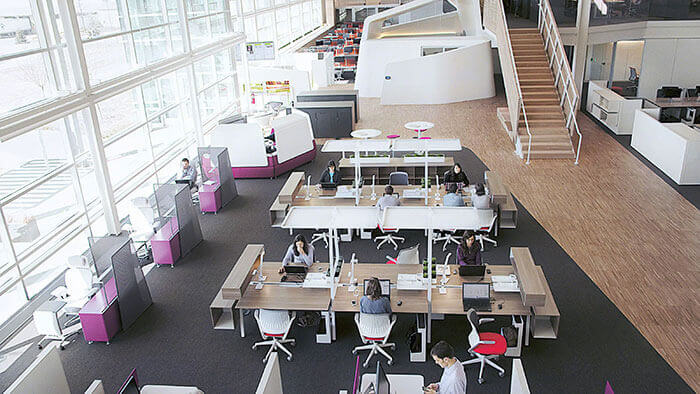 An inside view of the Steelcase Innovation Center in Grand Rapids, Michigan. Courtesy of Steelcase. 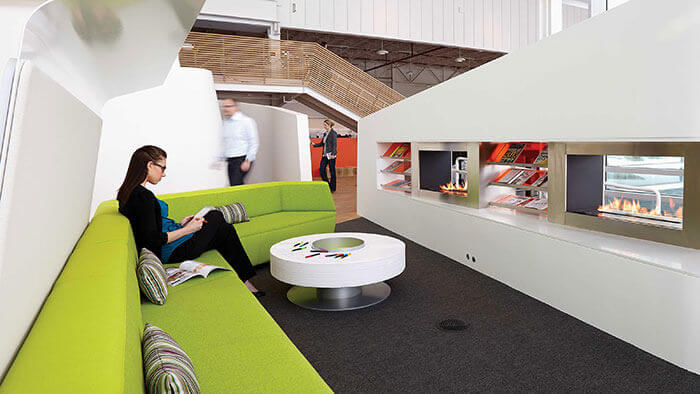 Steelcase invited 800 dealers to tour the Innovation Center—but it was a virtual tour. Courtesy of Steelcase. 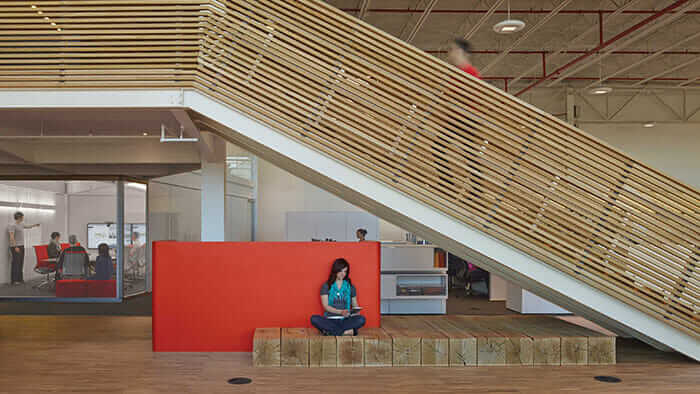 Thanks to VOS, the virtual Innovation Center tour was a complete success. Courtesy of Steelcase. 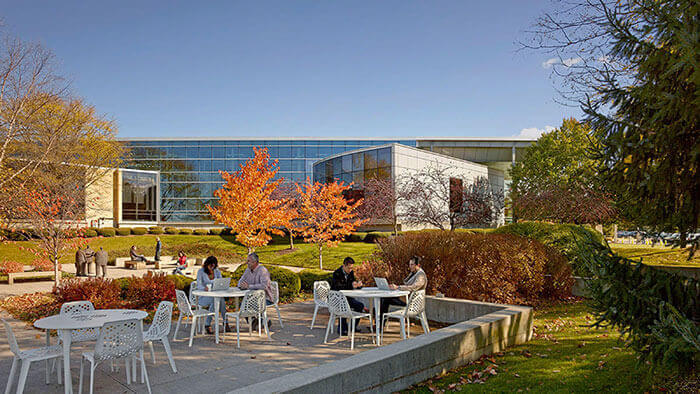 An important future milestone is to take VOS mobile, Goetzinger says. With systems in Grand Rapids and Munich, Steelcase’s aim is to roll it out to showrooms worldwide, and that means close collaboration with software and hardware partners to make it possible.

But in a more philosophical sense, Goetzinger’s task as an innovator is simply to keep his eyes open. “I’m often asked what our horizon is,” he says. “Most companies look at horizons of three or five years. My far horizon is 12 months—we don’t know how the industry is going to change, we’ve witnessed disruptive change several times already.”