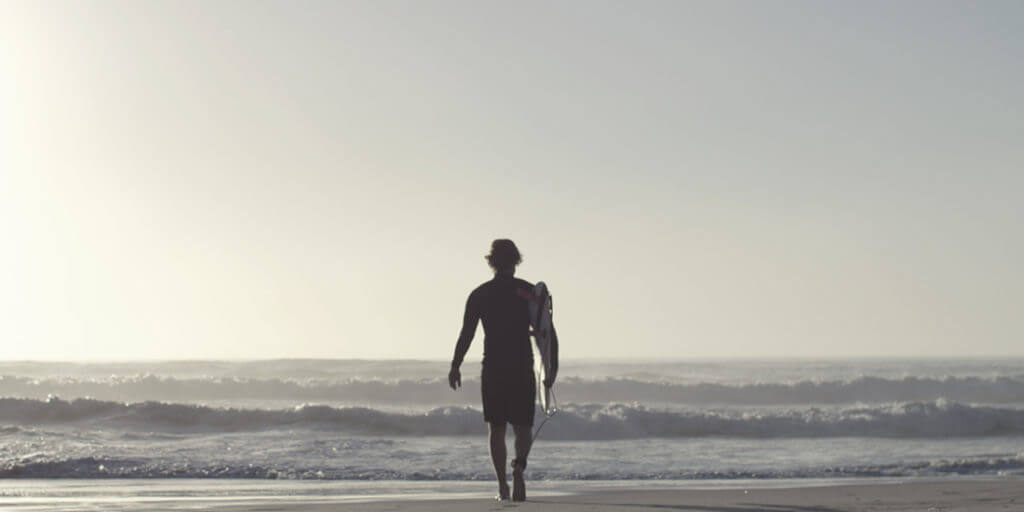 Outwardly and in reputation, surfing seems like it couldn’t be any more environmentally sensitive. It’s all about connecting with nature: just you and the power of the ocean, nothing but a simple device of plastic and foam between you and the primal forces of the Earth.

To lifelong surfer Stu Bowen, this idyllic vision about surfing is “the height of hypocrisy.” Nearly a half-million surfboards are sold every year, and most boards last just six to 12 months, often snapping under the strain of performance.

Bowen wants to do something about it.

“It’s a great example of what’s now called a linear economy,” Bowen says about traditional surfboard manufacturing. A surfer since his teens, the Australia native and environmental activist decided to change the way boards are made. “That means we take resources, make something, and then dispose of it,” he says. “That applies to the vast majority of the human economy.”

Bowen established his company, Lamina Flow, to build surfboards using what he calls circular economy principles. “It’s about designing out waste,” he says. “If you look at the world prior to human domination, there was no waste; everything was food or raw material for something else. The principle of a circular economy is to design out waste and engineer in performance. We want to surf better, perform better, and the other thing that’s really important is for [boards] to last longer.”

In starting up Lamina, Bowen is trying to fulfill a long-standing promise that business—usually considered the bad guy in the health of the environment—can actually be the solution.

He calls the usual way of making surfboards a trial-and-error, experimental process. “[Companies] make dimensions and shapes; people ride them and give them feedback,” he says. “It’s just this big inefficient feedback loop that keeps going. I want to stop the madness and apply intellect and software to give the surfer what they want.”

By Bowen’s admission, he’s got some hurdles to overcome. One irony of surfing is that while the entire pursuit rises and falls on changes that surfers monitor religiously—changes in the weather, the swell, the tides, and so on—most of the industry steadfastly resists changing the way it makes boards.

For thousands of years after surfing was invented in the South Pacific, native peoples used planks of wood and networks of reeds to make boards—environmentally friendly but often heavy and ungainly. During the ’30s and ’40s, the industry took cues from boatbuilding, adopting resins, fiberglass, and polyurethane foam.

Bowen says it’s the best the industry could do at the time, but it took surf manufacturing into a dark new age of petrochemicals and their derivatives. A lot of resources go into surfboard manufacture at various stages (more than just the toxic materials that end up in the board itself), and there’s ultimately nowhere for them to go. “If a surfboard snaps, and it might do so on your very first ride, I’ve never seen anyone go and retrieve one,” he says. “It’s lost to the ocean forever or to a landfill if it washes up onto the beach.”

Bowen’s approach at Lamina Flow merges design and manufacturing into one. “We use software technologies that are mind-boggling,” he says. “We’ve got advances in materials. We’ve got all these things happening. All I’m really doing is joining the dots as a surfer and asking how we can do it better.”

One of the linchpins he’s trying to enable is precision. Even though making something manually has the romantic spirit associated with surfing, it’s very difficult for a human to replicate features in something that needs as much balanced precision as a surfboard.

Inspirations for Lamina Flow’s work came from all over—from skis and snowboards, which are very hard to break, to bows and arrows. It led to the use of a series of laminas (hence the company name). Instead of using a single foam core with a wooden stringer down the middle—the length of material that both strengthens the “spine” of the board but unfortunately makes it more brittle—Lamina Flow surfboards have three layered cores, which let Bowen and his team build reinforcements into each layer.

Currently in rapid prototyping, Lamina Flow is using subtractive CNC milling to get it right until it’s time for the next phase. “We’re minimizing waste at every step,” Bowen says. “And in the not-so-distant future—probably even later this year—we’ll do it all with additive manufacturing. But we have to get everything right first. This is where we do all the learning.”

In this process, Bowen has seen Lamina Flow’s remit extend beyond Earth friendliness. “This story started as an environmental one and became a performance one,” he says. “Most people told me you can’t make sustainable surfboards perform better than normal surfboards, but I’ve found that you can. Until recently, surfboard shaping has been more art than science. I’m trying to make it data driven.”

The other advantage to the craft shop–scale approach is customization: engineering for different user performances. “We can give the boards more flex; we can make them spring back more; we can make them stiffer,” Bowen says. “I looked at what surfers need, and what they primarily need more of is performance. That comes in the way of flex, springback, et cetera.”

Such feedback from the board and the ocean below it are critical parts of surfing, just like the subtle balance and weight shifts involved in riding a bicycle. “There is a thing surfers call ‘lagginess,’ the responsiveness where the board moves and becomes almost an extension of your body,” he says. “I looked at how we could apply things like biomimicry and circular design to reinvent it.”

It Takes a Village

Bowen insists he’s not interested in being the star of the Lamina Flow story. It’s about the environment and doing things better, but it’s also about collaboration, with the entire team elevating the work. Collaborating long distance between Bowen’s home in Australia’s famous surfing mecca of Byron Bay and Autodesk engineers in San Francisco has been challenging but rewarding.

Bowen and his team digitally engineered the tapered leaves (laminas) in Autodesk Fusion 360 3D design software, which could be shared in the cloud with the mill operators in the United States. They could make any necessary changes or adjustments identified during prototyping immediately in the software tool paths. “The cloud-based platform definitely helped bridge the distance,” Bowen says of the 17-hour time-zone shift.

It’s early days for Lamina Flow, but so far, its design and manufacturing proofs of concept are solid. And when you consider that Polynesian prince who first carved a flat board out of a tree to ride the waves thousands of years ago, he was a lonesome outlier in his field, too.