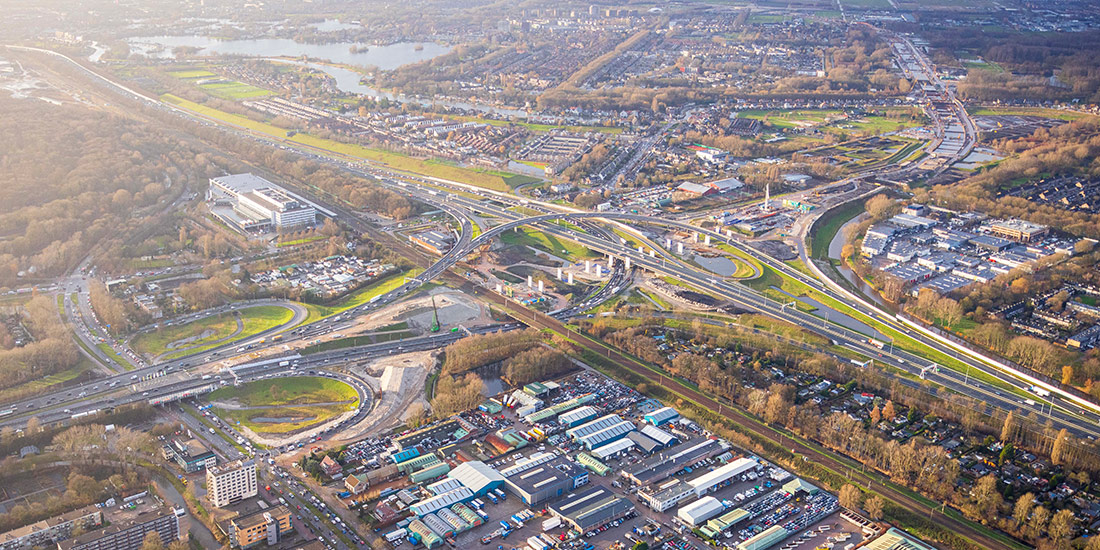 Whether it’s an interstate or the Autobahn, highways mean freedom and mobility—the lure of the open road. Pedal to the metal, no stop signs in sight, people and goods hurtling from town to country and back again.

But those positives come at a cost. Highways hammer local ecologies. Along with the millions of internal combustion engines they carry every year, big roads also cut across and fragment natural habitats. Animal migrations are impacted, and surface runoff shifts change the volume and direction of water flows. Roads are sometimes moved underground to protect areas of natural beauty, but tunnels require energy to light, maintain, monitor, and ventilate.

And then there are the health impacts. In North America alone, between 30% and 45% of the urban population lives next to a busy road. Pollutants along highways accumulate in higher concentrations than in communities as a whole, which increases the instance of lung and cardiovascular diseases.

In Rotterdam, a group of Dutch builders, designers, and engineers is working to overcome those impacts by building a new, sustainable highway that will be well-integrated into the local landscape.

Traffic jams are a daily problem on the beltway that rings Rotterdam. To relieve congestion and improve the quality of life for residents, an 11-kilometer (6.8-mile) link road is being built between the A13 and A20 motorways, north of the city, to reduce traffic going through it.

The breadth and scale of the firms involved speaks to the level of ambition of the billion-euro project, one that’s unique in its approach to sustainable design, construction, and management.

“The aim is to make the highway as inconspicuous as possible,” says Arjan Visser, engineering director at MOBILIS. An extended tunnel that takes road and traffic out of sight is key to integration with the surrounding environment.

Hidden underneath the Lage Bergse Bos recreational area, the tunnel will also pass under the nearby Rotte river. “Part of the plan is to improve the recreational area to make it more accessible,” Visser says. “It was neglected in previous years, but now we’re adding bike paths, riding routes, and hiking trails.”

To minimize its footprint, the team is equipping the tunnel with intelligent solutions for electricity, heating, ventilation, and lighting. LED lighting picks up the slack when nature’s lamp isn’t enough. The tunnel’s lanes and walls are also being coated with a reflective surface that strengthens ambient illumination.

Tunnel systems and roadside installations such as emergency phones will all run on DC voltage, a more sustainable approach than the standard AC voltage that most highways depend on. All of the power is produced by solar energy generated by 20,000 square meters of photovoltaic panels extending along the road’s edge. That will make it Europe’s first energy-neutral highway with a tunnel.

Several green construction measures are being put in place to help protect the local environment. For example, the area around the construction site is a natural habitat for bats. A special fabric has been erected to give the bats additional cover and protection to compensate for arboreal loss.

Meanwhile, noise pollution is being reduced by surfacing with specialized noise-reducing asphalt and installing sound barriers and earthen embankments near residential neighborhoods and other built-up areas. A flyover is also being built using the Incremental Launch Method (ILM). With ILM, the flyover’s segments are being prefabricated in a casting yard for assembly on-site later.

Each piece is added directly to the preceding one, enabling the flyover build to happen in increments, without an intensive, noisy, and dirty dedicated build happening over days and weeks. All these elements are being made easier by building information modeling (BIM) and 3D modeling.

Lighting the Way With BIM

“The BIM model is the heart of our organization,” says Hans Pos, senior consultant at Croonwalter&dros. “We use it to see the purely structural elements plus all the cameras, the emergency call stations, and the lighting for 54 installations in the tunnel. It’s all in that 3D model. That way, you can test everything. We can simulate the appearance of smoke or a traffic jam and activate ‘calamity mode’ to see how control systems respond and calculate the impact on road traffic.”

Getting the light right is vital to the project’s sustainability goals. Illumination is the No. 1 energy hog for highways and tunnels. Calibrating energy consumption in relation to available daylight is another way BIM contributes to the project.

“We use digital testing for preparation and then fine-tune the lighting with the human eye,” Pos says. “The combination of both makes it more accurate, and you can start looking at energy consumption much earlier in the build. For example, a sun analysis can be conducted over the whole year, allowing us to take measures that can save 30% on energy consumption.”

Thinking beyond the build, De Groene Boog is creating Twin-16, a virtual 3D model of the new motorway that will eventually mimic its real-time operation as a digital twin. Fed by data from embedded sensors and cameras, Twin-16 will help traffic controllers and road engineers monitor activity and performance as it happens. Where maintenance teams previously had to visit a highway or tunnel location to investigate potential problems, the road’s digital twin will enable them to test and monitor remotely.

The difference between the twin and a 3D BIM model lies in the data connections. BIM is used mainly in the design and engineering phases. The digital twin will be used to monitor how the highway holds up when it has real cars and trucks moving over it at speed.

The Road to Sustainability

Using BIM makes it easier for stakeholders to collaborate and understand the current state of the project quickly.

“For people who are not from the industry, our drawings can be difficult to read,” Pos says. “If you’re planning the location and layout for a field of solar panel fields, using a flat drawing will be hard for someone from a municipality to understand. If you share a 3D model of it, you can show the client what a motorist would see. Then, everyone understands why a motorist would be distracted by a panel, for example. BIM means you can bring an idea to life for clients and partners and make it easier for them to make decisions about what’s possible and what isn’t.”