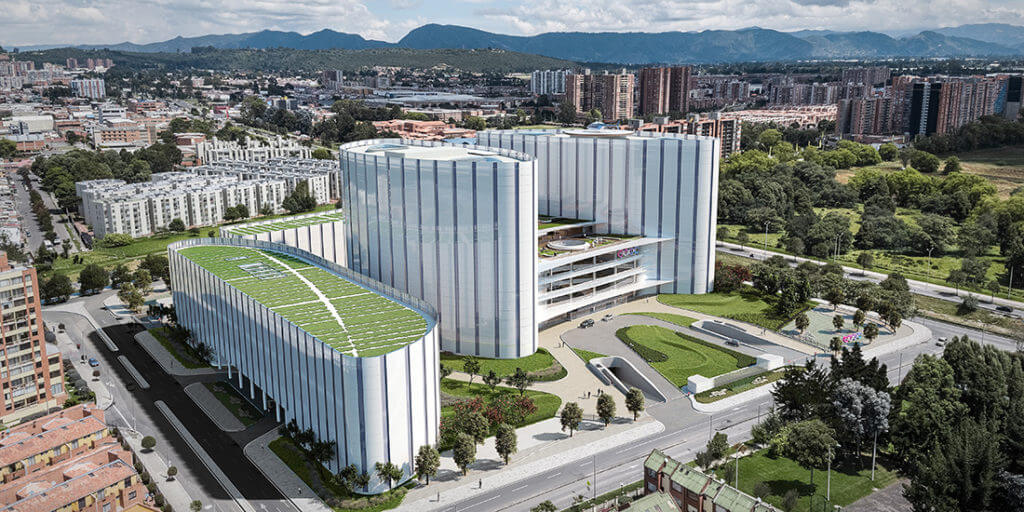 For more than 50 years, Colombia was considered one of the most violent places on Earth due to a decades-long civil war between the democratic government and Marxist rebels. But a historic 2016 peace agreement with the country’s largest guerilla group, the Revolutionary Armed Forces of Colombia, or FARC, has brought with it the tourists and investors who once feared the country.

Now, Colombians can finally direct social and financial resources to more pressing problems—such as cancer, the second leading cause of death in the country. Colombian real estate development and construction company Construcciones Planificadas is leading the fight against cancer in Latin America using sustainable hospital design, sponsoring and building a new, state-of-the-art cancer facility in Bogotá.

It’s not just its size and scale that make CTIC special: It’s also the digital methodology behind its build and its emphasis on sustainability, which both increase quality and, ultimately, save lives.

Colombian billionaire Luis Carlos Sarmiento Angulo established Construcciones Planificadas in 1959. Decades later, thinking about his legacy, Angulo chose a grand philanthropic project that would repay the debt of gratitude he felt toward his country for the opportunities it had afforded him.

“Our owner is a very visionary person,” says Mauricio Patiño, design manager at Construcciones Planificadas. “He wanted to make a project that would be like a social donation to the country and to the region.”

By 2014, when project planning began in earnest, Angulo had decided what to focus on. “He realized that cancer was one of the biggest problems and concerns that humanity has,” Patiño says. “So he began researching opportunities with international firms and hospitals and came up with the idea to create a cancer center.”

Cancer in Colombia is particularly lethal, according to Colombia Médica, a Colombian medical journal. In 2018, it reported that 63,000 Colombians receive a cancer diagnosis every year and that the survival rate of three common cancers—prostate, cervix, and breast—is 20 to 30 points lower in Colombia than in North America and Europe.

One reason for this lower survival rate is a dearth of oncological infrastructure, including health-care providers with the facilities, expertise, and technology needed to deliver specialized cancer care. According to Colombia Médica, the country has 1,780 cancer-care providers, but only 25 offer joint chemotherapy, radiotherapy, and surgery services. Especially lacking, according to Construcciones Planificadas, are facilities with linear accelerators used in radiation treatments, facilities for bone-marrow transplants, and specialized surgery units.

“There are many types of cancer where you have to go outside the country—to the United States, usually—for treatment because in Colombia we don’t have the necessary resources,” Patiño says. “That’s why it’s so important that we’re building a comprehensive cancer center.”

Upon completion, CTIC will be a one-stop shop for cancer diagnosis, testing, treatment, management, and recovery. Building such an integrative facility requires taking an equally integrative approach to design and construction, according to Patiño. The project team is using BIM (Building Information Modeling) to collaborate with many subcontractors and stakeholders, including international health-care vendors and consultants whose oncological expertise has yielded a design that will optimize patient care.

“We have more than 30 different specialties that need to be integrated,” Patiño says. The project team is using Autodesk Revit for design creation and coordination, Navisworks for budgeting and quality control, and BIM 360 Docs for project management. “It would be impossible to coordinate such a large, international team using a traditional 2D methodology,” he says.

Along with coordination, BIM enables the precision necessary for a project of this scope; Revit models provide the detail needed to design specialized laboratories and other bespoke medical spaces that rely on technical considerations to account for equipment and networks, as well as incorporating the feedback of patients and medical personnel. “It guarantees that you have fewer faults in the final product,” Patiño says. Ultimately, the byproduct of a better building is better care.

Better care for the planet is also a primary goal for CTIC. Focusing on sustainability, the project will seek LEED Healthcare v3 certification from the U.S. Green Building Council for its many green features, including: dedicated parking spaces for low-emission vehicles and carpooling; bicycle racks; native-species landscaping with an efficient drip-irrigation system; energy-efficient medical equipment; an on-site treatment plant for gray water and rainwater, which will be recycled for toilets and urinals; a solar water-heating system; low-VOC paints, sealants, and adhesives; a backup electricity system that uses a flywheel instead of batteries; and a modular facade with alternating blank and glazed zones for optimal energy performance.

Both directly and indirectly, sustainability will help CTIC improve patient outcomes. Being efficient with resources, for example, will help the hospital reduce costs, ensuring that more money is spent on care and less on overhead. Likewise, sustainable design elements do double duty.

For instance, architect Rafael de la-Hoz designed the hospital in the shape of two human lungs—two oblong towers connected by a central atrium, the top of which will be a year-round outdoor terrace for patients to use. The towers’ curved geometry, orientation toward the mountains, and organization around interior gardens maximizes sunlight to reduce energy consumption—while also lifting patients’ spirits. “The architect wants all spaces of the hospital to have natural light, which is very important for recuperation,” Patiño says.

From sustainability to design methodology, that’s what the project boils down to: recuperation. For Colombian cancer patients who are used to incomplete care, that might sound like a pipe dream. But then again, so did peace in their country. If one is possible, surely the other is, too.