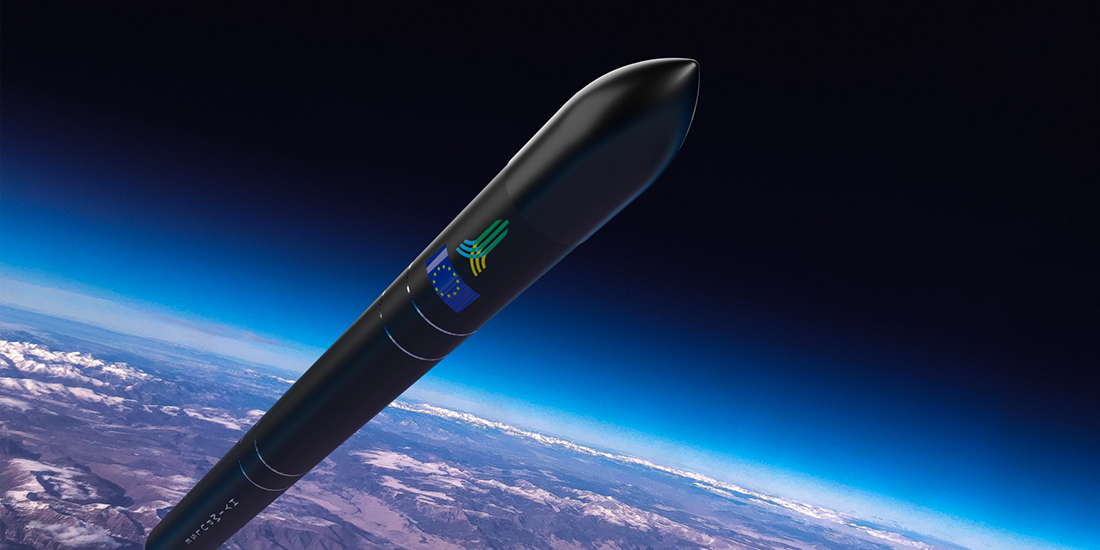 In July 2021, media reports on space flights skyrocketed as a billionaire space race made headlines around the globe. Millions followed as British business magnate Richard Branson flew to the edge of space aboard SpaceShipTwo on July 11 and then again as Amazon founder Jeff Bezos completed his own spaceflight on the New Shepard just nine days later.

Judging strictly by the launch date, Branson was a step ahead of his rival. However, considering the Fédération Aéronautique Internationale defines space as beginning 100 kilometers (330,000 feet) above earth’s sea level—and Branson only reached around 86 kilometers (nearly 283,000 feet)—Bezos can stake his claim to having won. His flight officially reached an altitude of 107 kilometers (more than 351,000 feet).

The extensive media coverage of these launches has kept three new German space companies from the front pages of the world’s press. All three have the goal of sending small satellites into orbit using microlaunchers, which will benefit everyone far more than Bezos’s and Branson’s undeniably spectacular space flights—if everything goes according to plan.

German start-up HyImpulse is one of three companies, alongside Isar Aerospace and Rocket Factory, that qualified for a microlauncher competition run by the German Aerospace Center (DLR) earlier in 2021. Isar Aerospace Technologies was ultimately named the winner of the competition and awarded almost $13 million in funding from the European Space Agency (ESA).

The young team of researchers at HyImpulse did not let their disappointment dampen their spirits, though. Co-CEO Christian Schmierer was not particularly surprised that the award went to a competitor.

“It was quite clear that Isar Aerospace would win the first round, since they were able to demonstrate the highest financial backing,” he says, pointing out that the technology accounted for only 30% of the assessment. “Our unique propulsion system based on paraffin wax is what sets us apart from our competitors.”

An Ecological Choice of Fuel

A wax-powered rocket may sound crazy at first, but it is a realistic option using a tried-and-tested method. Adding paraffin wax to liquid oxygen helps to make the propulsion system safer.

“If a rocket that uses kerosene fuel crashes, it will contaminate the sea or land,” Schmierer says. He explains that because HyImpulse’s rockets cannot explode, they will not cause an environmental disaster. “The paraffin wax can be collected and melted down again, and it’s safer for our employees, too” he says.

Paraffin wax isn’t perfect, though. It’s still a by-product of the petroleum industry, and burning it is still harmful to the environment. Replacing normal paraffin wax with eco-paraffin, which HyImpulse hopes to do by 2030 at the latest, promises to be a solution: one that will lay the foundations for the first-ever climate-neutral spaceflight.

Eco-paraffin is produced artificially, and Schmierer believes this makes it possible to launch a rocket without damaging the environment. “We create paraffin that can be stored as fuel by removing carbon dioxide from the air,” he says. “This carbon dioxide is then emitted back into the air during the launch, making the flight carbon-neutral.”

Until 2016, Dr. Peter Rickmers worked at the Center of Applied Space Technology and Microgravity (ZARM) at the University of Bremen, where he developed a hybrid propulsion system based on liquid oxygen and paraffin. Today, he heads the Reusability Flight Experiment (ReFEx) project at the DLR.

Rickmers explains that wax is nothing other than a string of “Cs and Hs”—that is, carbon and hydrogen molecules. “The more Cs and Hs in a row, the denser the material,” he says. “First, it becomes oily; then, it turns into a gel, and, finally, it turns into wax.” But the most important issue for Rickmers is where the Cs and Hs come from.

“Do I create them using a sustainable method or pump them out of the ground?” he asks. Rickmers believes a rocket launch could be considered climate-neutral if the carbon were to come from the air and the electricity required to separate hydrogen from water were to come from a renewable energy source such as a solar power plant. Fuel combustion would create water, which would then fall back into the ocean, and carbon dioxide, which having initially been extracted from the air, would be released back into the environment.

Schmierer emphasizes that HyImpulse’s plan to use renewable energy to create the paraffin by means of carbon capture achieves exactly this. “We plan on beginning development next year,” he says. “As soon as we’ve secured the financing.”

HyImpulse has set a target of achieving carbon-neutral propulsion by 2030. Schmierer is confident that the start-up, which currently has 60 employees at its site in southern Germany, will reach this ambitious goal. “We have the highest technical expertise among all our competitors,” he says.

HyImpulse has been developing and testing rocket engines for more than 10 years. The idea was born in 2006, when the current CEO, Mario Kobald, was still conducting research at the University of Stuttgart. The management team that Kobald now heads met while they were students working on a hybrid-engine development project.

In 2016, this group of four inventors set a world record for student hybrid rockets by reaching an apogee of 32.3 kilometers (nearly 106,000 feet). All four worked as test engineers at the DLR while they were still studying. They then started HyImpulse in 2018 with about $2.9 million in funding from the EU; further investment was provided by Prof. Rudolf Schwarz from the Technical University of Munich.

HyImpulse’s team is currently working on two rocket projects. The first is a suborbital rocket whose propulsion system will be tested in flight this winter. Suborbital simply means that it launches high into the sky and immediately returns to the ground without entering the Earth’s orbit.

This sounding rocket will be used for research purposes and to observe the planet. Schmierer sees the next big challenge as convincing skeptics. “So far, the engine has only been tested on the ground,” he says. “Now, we have to prove to the doubters that this technology really works.”

HyImpulse’s ultimate goal, however, is the maiden voyage of its microlauncher. The first test flight of the SL1, which will be able to transport a payload of 500 kilograms, is scheduled for 2023—if the pandemic or supply bottlenecks don’t disrupt plans first, that is. “We’re working towards scheduled flights for space travel,” Kobald says.

HyImpulse sees its potential customers in satellite operators. “The very first flight will be able to carry satellites,” Schmierer says. “Since it will be a test flight, the customer must be willing to accept a greater risk.” HyImpulse’s business model calls for customers to pay per kilogram of payload. The price is currently estimated at $18,500 per kilogram.

The company hopes to reduce this amount to about $8,000 per kilogram by 2030 through series production. Taking the entire development process into consideration, Schmierer estimates the costs of a single launch at between $690,000 and more than $1 million. Things should move quickly once the maiden voyage is completed. HyImpulse plans to conduct six launches for 2025, and from 2030, it hopes to offer more than 30 launches per year.

In the next 10 years, HyImpulse plans on building 50 rockets and approximately 400 engines per year at its site in Germany. Reaching this ambitious goal is possible only because the rockets are first created digitally. Employees can simulate the engines’ loads and specifications using Autodesk Fusion 360.

New features can be tested digitally on the spot, which avoids construction errors during production. “One reason we chose Fusion 360 is that it is a very flexible system that can be easily adapted,” Schmierer says. “It’s very easy to design individual components digitally and then compile them to create a rocket.”

Then, there is the question of demand: Is this a viable business model, and will there be enough customers? To date, HyImpulse has published two memorandums of understanding with companies that have expressed interest in its work.

One is with Yuri, a start-up that specializes in microgravity research, and another is with Exolaunch, which provides “rideshares” for satellites. Although HyImpulse has not provided any information on any other potential customers, the team has no doubt that there will be a demand for their services.

Companies like HyImpulse see enormous sales potential in their plans to develop microlaunchers to transport small satellites into space. “Small satellites can help us better understand climate change and will play a role in protecting the environment in future,” Schmierer says.

The more satellites there are in space, the easier it is to measure and analyze unexplored areas accurately. There will be systems specializing in ship and aircraft communication, as well as new applications that monitor rail networks and pipelines. “All these companies would be customers of our customers,” Schmierer says.

He also predicts that there will be “a number of companies focused on evaluating data.” But companies like HyImpulse are a prerequisite for this. Someone first needs to provide satellite manufacturers with the opportunity to put their satellites into orbit.

The greater the number of satellites in orbit, the greater the amount of data and the more accurate the forecasts. Many aspects of daily life already depend on space. According to Rickmers, much of this goes unnoticed: “Without satellite communication, many systems would be limited or even collapse all together—from navigation and weather forecasts to stock exchanges and disaster control.”

If Germany’s new space companies achieve their goal of sending small satellites into orbit, drivers would benefit from more precise predictions of where a traffic jam might occur. It would also be possible to determine the location of an accident more precisely and predict flooding with greater accuracy. Farmers would be able to pinpoint the exact time to fertilize and irrigate their fields as satellite data would show exactly where a field is particularly arid.

Schmierer considers the development of the propulsion technology as essential for HyImpulse to stand out against both international and German competition in the long term. “Our launchers are the key to entering the earth’s orbit,” he says. “And if you hold the key, then the payload and customers will follow.”

Into Orbit and Back

Developing clean propulsion technologies is one thing, but it should not be forgotten that—in an ideal world at least—everything that goes up must come down (perhaps on a space elevator). The number of satellites in earth’s orbit will increase disproportionately in the years to come, and the problem of space debris must be addressed.

Holger Krag, head of the Space Debris Office at the ESA, predicts that in a few years, more satellites will be launched than in the history of space flight to date. “We are currently experiencing a revolution,” Krag says. The ESA estimates there are currently over 7,500 satellites in orbit, of which 4,500 are still functional while the remaining satellites are junk, according to Krag’s podcast, WeltraumWagner.

Roughly every two weeks, mission control at the ESA has to take action to ensure one of its satellites does not collide with another, Krag explains. He laments that there is still a lack of regulations and standards and says that this presents a challenge moving forward. In an effort to combat this, the ESA is working with the Swiss start-up ClearSpace, which aims to launch its first mission to remove space debris by 2025. And the HyImpulse microlauncher will be able to carry the robotic device into space, where it will collect the debris in order to bring it back down to earth.

HyImpulse is also working toward ensuring its rockets will be able to return to the ground in one piece so that they can be reused. Developing green propulsion methods is an important step toward making spaceflight more sustainable, and all space labs must make an effort to ensure this. For spaceflight will only be viable in the future if it causes no harm to the planet.