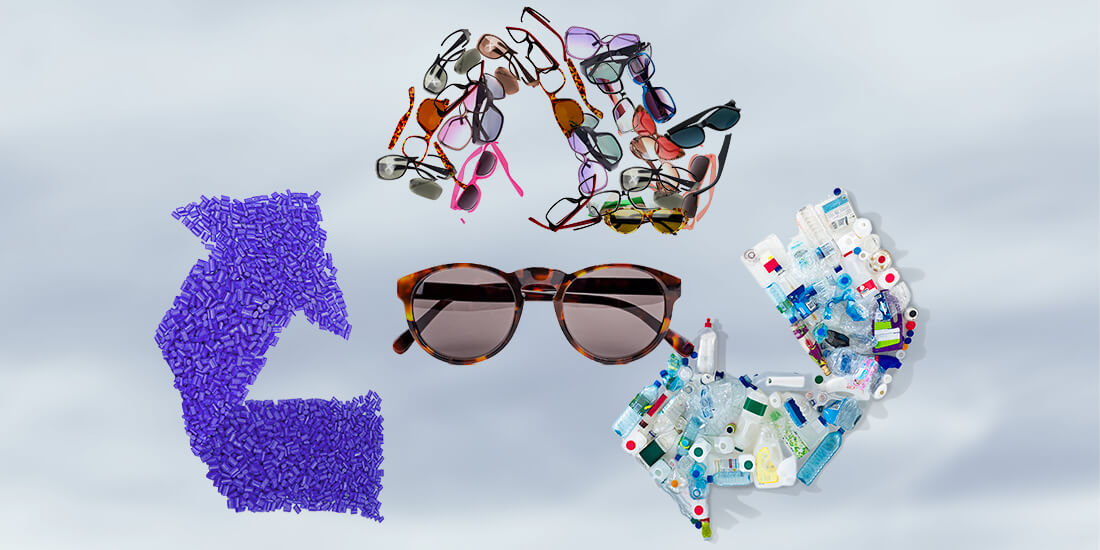 Sunglasses are big business: 30% of the planet’s population owns at least one pair, and worldwide sales will rake in a cool $30 billion this year. With global warming and changing weather patterns prodding at demand, the category is pegged to grow at almost twice the rate of prescription specs.

Unfortunately, the most fashionable shades are made from plastic. As sustainability climbs to the top of the apparel industry’s agenda, it matters more and more how eyewear manufacturers source the raw materials to make all those colored frames and lenses.

For the green entrepreneurs at Yuma Labs, that confluence of factors has created a new market opportunity: sustainable sunglasses—in other words, sunglasses that are “totally circular.”

The phrase is not about shape (of which circular is just one option). When someone is done with a pair of chic wraps or wayfarers, a painless return process allows it to be sent back for disassembly. Each one is then broken down chemically and reconstituted as the components for a brand-new pair.

Some of the biggest fashion retailers on the planet think that’s pretty cool—as a business model, a manufacturing process, and a philosophy. Customers aren’t just buying a product. They’re buying into an entire production philosophy.

The 10 million tons of plastic people dump into the ocean every year is well documented, but how the football-field-size islands of polymer bobbing around the Atlantic and Pacific are held together by plastic nets from fishing trawlers is less understood. Some 640,000 tons of old nets are lost or discarded annually.

It’s a problem that many consumer brands are trying to address, but at least in the sunglasses category, Yuma Labs seems to have cracked it. The company’s sun specs are made entirely from plastic reclaimed from the sea—old bottles and nets, specifically.

When customers wear out a pair—or the next fashion cycle demands an eyewear upgrade—a bar-coded return label inside the product package (made from reclaimed paper and cellulose) lets them slip the sustainable sunglasses into the nearest mail slot. No matter where in the world they go, the sustainable sunglasses can find their way back to Yuma Labs for disassembly and recycling.

For the end customer, it’s low-effort and postage-paid. For Yuma Labs, it means a continuous supply of raw material and a chance to stay engaged with customers, keeping their loyalty through multiple repeat purchases.

“I wanted to get away from the tree-hugger associations that many people still have regarding green branding,” says company founder Sebastiaan De Neubourg. To get people on board with sustainability, he believes it has to become aspirational—cool, in other words. So what better way to build a circular business than with cool’s ultimate accessory?

A chemical engineer by training, De Neubourg started Yuma Labs after years as a circularity consultant to large corporations. It was a kind of dream job for a new graduate, one wholly aligned with his values. Eventually, he tired of endlessly “talking the talk” about sustainability without seeing companies take concrete action.

“It occurred to me that sunglasses would be an ideal vehicle for making people enthusiastic about the circular economy,” he says. “I wanted to demonstrate that it can be easy, affordable, and convenient. That’s more likely to create a light-bulb moment where people say: ‘Okay, I get it. This is what the circular economy looks like.’”

With his experience engineering circular business processes, Kickstarter funding, and digital-modeling technology from Autodesk, Yuma Labs was born. In five years, it’s gone from a bootstrapped startup with a 3D-printing microfactory to a high-growth business using injection molding for high-volume production.

It also leaped from individual orders by fashion-forward trendsetters to white-label deals with major retailers. How did it get so far, so fast?

Can Only Startups Be Circular?

De Neubourg says starting a new company from scratch does have its advantages in creating a manufacturing model based on circularity.

Traditional sunglasses makers have established supply chains optimized over decades to deliver materials at high volume and low price. Walking away from them entirely would be a considerable business risk. Even reengineering them for circularity would take effort and time.

The logistics of safely and efficiently managing a mass return and disassembly process is another complexity that established manufacturers might not be keen to tackle.

Yet green innovators also have their own hurdles to jump.

Despite the abundance of polymer-based waste in the world, it isn’t easy to source recycled manufacturing-grade plastic of consistent quality. Once a reliable supply has been established, the plastic made from old bottles is rigid and hard to bend into shape.

Alongside the technical difficulties, punching its way into an established industry is also a challenge for any startup. De Neubourg says having access to free versions of Autodesk Fusion 360 on the company’s plan for entrepreneurs helped him immensely when he started Yuma Labs.

As a Fusion 360 fan, he had access to best-in-class design tools from the get-go, which accelerated his plans and simplified initial collaborations with customers, distributors, and designers.

A Future So Bright

De Neubourg now says the company is starting to look beyond sunglasses. No formal announcement is in the offing, but it’s easy to see loads of potential to branch out. For example, roughly half the population in the global North needs corrective eyewear. That number is expected to rise as constant smartphone use makes more people prone to myopia.

For now, Yuma Labs has enough to deal with accommodating the growing list of retail and apparel brands eager to engage it as a white-label provider for their own sustainable fashion lines.

The likes of COS (H&M Group) are already on board, and De Neubourg says he’s currently asking a long line of others to form an orderly queue.

“In the beginning, we were saying: ‘Sorry, no. We’re not set up for this. It isn’t our model,’” he says. “Now, white-labeling circular products for other brands is almost all we do. Never say never.”