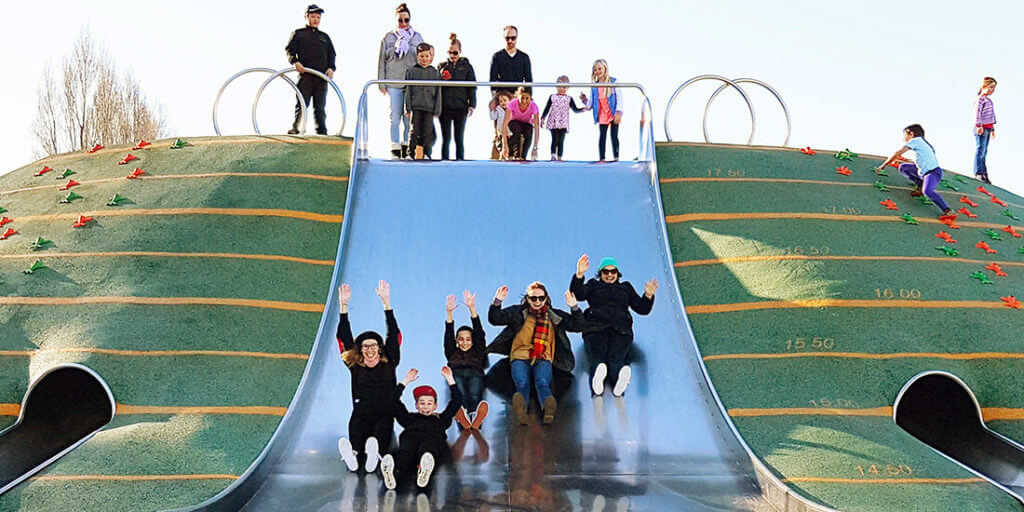 Move over SimCity, there’s a new city-building game. But this isn’t your typical video game—it’s an interactive virtual-reality (VR) experience that simulates the process of sustainable urban planning.

Sustain-a-city aims to increase awareness of what it takes to build an actual sustainable city. “Historically, cities tend to build their different infrastructure elements separately; but to create a resilient and future-ready city, you need to look at all these infrastructure elements as an integrated system,” says David Kidd, general manager of client solutions at WSP Opus. “So part of creating the Sustain-a-city virtual-reality game was to bring that concept to life and highlight it in a visually compelling way.”

Sustain-a-city is like a cross between SimCity and LEGO. Instead of establishing individual houses and buildings, players put down plots of land and link them together. Taking inspiration from the settlement-building board game Catan, components in Sustain-a-city are modeled as hexagonal tiles. Players place tiles on the board as they advance through five levels of the game, monitoring the progress of their virtual city on a dashboard that shows what each city requires and what players can do to meet those requirements.

“The elements we chose were those you typically find in a city: water resources, power or energy resources, residential housing, commercial buildings, and transport,” Kidd says. Components in the VR game must be in perfect balance or the health of the virtual city plummets, just like in a real-world city. “It works as a sort of ecosystem,” he explains. “So if you choose to create lots of residential and commercial buildings in your city, then the population rises. And if you haven’t allowed for enough water and power resources, the population starts to be impacted. Depending on the choices you make, the city can either thrive and start growing or it can struggle.”

The VR game was developed with education and engagement in mind. For WSP Opus, it was a question of how to make the serious work of designing and planning infrastructure projects and cities more stimulating—maybe even fun.

“Virtual reality proved a perfect platform for doing that,” Kidd says. “It’s a good way of engaging people who are new to engineering, considering a career in engineering, or who are interested in the whole concept of city planning and what makes a great city. Gamifying it made it both entertaining and educational.”

“We could have done it as a video or an online game and it would have still been fun,” says Method Digital managing director Sam Ramlu. “But with VR, you’re in the game. It’s a great tool to get people really immersed in the experience. Why present the ordinary when you could put someone in an environment that they might not ever get to experience in real life? It adds a ‘wow’ factor and that extra surprise and delight.”

Making Sustain-a-city both exciting and challenging was essential for Method. “It was something we had to balance,” Ramlu says. “We wanted it to be fun but challenging so people would want to keep going and play more.”

To do that, Ramlu says they had to make sure all the elements were connected and strategically placed for the tiles to operate. “A lot of the testing we did early on was mocking up physical tiles, assigning them to the different tile types within the game, and using these to test game play and how we could work up through levels—from basic through to challenging,” she says. “There was a lot of play-testing with that and seeing how it would all work together before we even went into VR development.”

The game features real-life WSP Opus projects simulated as 3D images embedded in the tiles, created in Autodesk Maya. These projects include a bike trail, a cycleway, an enclosed habitat for great apes, a playground, and street redevelopments. All of these elements can be experienced at the end of the game. “Once you’ve completed your level and created your city, you can actually walk around it,” Ramlu says. “It’s a nice surprise where you’re basically transported into your city.”

WSP Opus has demonstrated Sustain-a-city at engineering expos around New Zealand; Kidd says that players have enjoyed the iterative nature of the game, building up to each level and figuring out the most effective way to put components together. As a next step, the firm hopes to create a more sophisticated version of Sustain-a-city with more complex levels. It’s also exploring the potential of an app and online environment where players could play others and pit themselves against engineering experts.

WSP Opus is also expanding the VR game’s reach. “A lot of our international offices are starting to look at Sustain-a-city because we’ve developed it in a way that can be customized and localized,” Kidd says. “For the New Zealand version, we chose New Zealand–based projects to give it a local feel. But if you were developing the game for another location, you could pick local projects and landmarks for that.”

Sustain-a-city shows potential to make a broader impact. It’s more than just a virtual-reality game—it’s an immersive technology that helps bring the principles of sustainable cities to life.