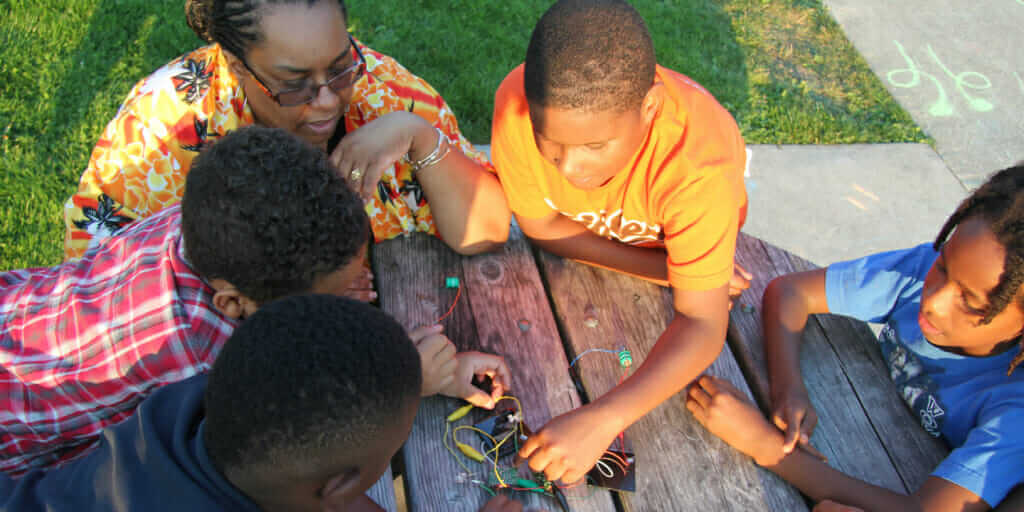 Whether you believe in fate, karma, or any spiritual force in the world, there are certain events in your life (both good and bad) that have the power to lead you to something better.

It’s certainly the case for Alma Lorraine Bone Constable, founder of TayaSola, a Social Purpose Corporation (SPC) that sells components to make solar lanterns and teaches people (particularly kids in Kenya) how to build and repair them.

It all started when Bone Constable took apart her mom’s vacuum cleaner (and couldn’t put it back together). Then as a teenager, the self-described “tinkerer” went on to become an early adopter in the burgeoning era of personal computers.

In the ’80s—at a time when War Games and Weird Science were popular movies—she created her own individualized Artificial Intelligence major at University of Pennsylvania, based on computer science, philosophy, and psychology. When she was 18, Bone Constable’s parents bought her an IBM PC, and she started her own business typing papers for students to help pay it off. Due to a chance meeting with a recruiter at her school, she was hired by Microsoft and worked as a tester on the Microsoft Word team.

Years later, Bone Constable suddenly fell ill with encephalitis and meningitis (known as meningoencephalitis), and due to the brain trauma, she lost her ability to read. It was a major setback, to say the least. “The doctors felt that I wasn’t going to get a lot of my memory back, which I didn’t,” she says. “They felt I wouldn’t be as functional as I had been previously and said, ‘Well, just get used to living like this.’”

At the suggestion of some educator friends, she went back to school to rebuild her brain, studying Environmental Science at Evergreen State College and then getting her MBA with a focus on Sustainable Business at Bainbridge Graduate Institute (now Pinchot) in Seattle.

She started listening to course books on tape and regained the ability to read soon after. But she still struggles with memory loss: “A lot of the memories I have is from people calling me up and saying, ‘Do you remember when we did this? No? Let me tell you about it.’ So it’s weird because you have stories that you don’t remember firsthand.”

But even crisis situations can have a silver lining, and as it turns out, the lasting effects of her illness would be a catalyst for the genesis of TayaSola. Bone Constable is involved in an organization called Cultural Reconnection, which unites African-American women with Kenyan women for sustainable ventures.

On her first trip to Kenya, she had a difficult time seeing at night due to her eyesight problems caused by another illness, keratoconus, and because she was staying in rural areas with no electrical grid. (According to the United Nations Foundation, “More than 1.4 billion people worldwide have no access to electricity.”)

“They had kerosene in most of the places we were going to, which is flammable and causes breathing problems,” Bone Constable says. “There are all types of horrible things about kerosene. It’s expensive [costing 46 percent more in rural areas than in urban cities of Kenya], and the quality of light is very poor, so often I could not see. So I would bring my own light, usually high-powered, battery-operated flashlights.”

As Cultural Reconnection focuses on ongoing dialogues between participants, Bone Constable had a number of conversations with people she met in Kenya. During talks with women in rural areas, she learned that they take on the role of cultural custodian, often making infrastructure decisions for their families. One high-priority topic for these women was better lighting solutions, particularly solar options.

What she discovered was that, although there are other companies replacing kerosene with solar lights, they’re often a short-term solution. “Generally, those lights last about 18 months, and then it’s unusable,” she says.

In Kenya, waste is seen as a bad thing. “Here in the U.S., everything is disposable,” Bone Constable says. “We can just throw it away and get a new one. But that’s counter to the culture of these communities. You don’t just waste stuff just because it’s not working.”

So her inner tinkerer resurfaced to figure out a more sustainable light solution. With help, her first iteration was a relatively inexpensive light built into a plastic water bottle, something the Kenyans had a surplus of lying around.

But Bone Constable’s goal wasn’t just to create a cheap solar light for Kenyans to use at night. She wanted a more sustainable solution that would involve teaching people how to generate their own clean energy, as well as reuse and repair components when they break.

“The goal was not just how do you get light so kids can study,” she says. “It’s how you solve a bigger problem. We’re looking to teach energy independence. How do we get people to think about generating clean energy and think modularly about not only power but about storage? What if we had a Lego-type modular light system by which to build any kind of sustainable energy? It’s not necessarily about solar. Solar makes sense in Kenya on the equator. It might not make sense in another place.”

In the case of TayaSola’s solar-lantern kits, the consolidation is a solar panel and circuit board, a regulator (also on the circuit board) and battery to store the power, and a light for distribution of energy. But according to Bone Constable, the output could be anything, including a water pump or radio.

So the TayaSola components could likely be used for other things. One Kenyan boy told her he was going to use the solar cells to make a portable cellphone charging station with his bike. Another wondered how she could create a solar water pump.

But before getting innovative, Bone Constable is concentrating on fine-tuning the production and distribution of the lantern kits. To get costs down, she started with cheap materials, such as electrical tape. Unfortunately, that didn’t work out well in the stifling heat of Kenya. “It’s a sticky, evil mess,” she says. So TayaSola is still iterating on the manufacturing process.

Another issue is capital. TayaSola lanterns have been requested in numerous countries, but it takes time to scale. “I consider us what I call a slow-fast company,” she says. “The trend in small business right now is to grow as big as you can, as fast as you can. But when you’re trying to make a sea change, when you’re looking at generational change, that’s not always the way to go.”

Bone Constable wants to give one generation of kids the knowledge to create their own energy and see how that evolves over future generations. With multiple iterations over time, she thinks these kids in Kenya can improve upon the solution: “The question is, what if we had 20 years of kids looking at [the problem] and saying, ‘How can we make a more efficient solar cell with vegetable dye and glass?’ I think it’ll get done. Or maybe they’ll say, ‘No, it can’t be done, but we can do it out of sand and twigs.’”

Whatever the future holds for solving energy problems in parts of the world off the grid, Bone Constable is all about the steady journey. TayaSola has built distribution relationships in Kenya and has partnerships with Boardwalk Brand to bring its product to the U.S. market and D.A. International Group for manufacturing.

Considering the long view of her company, Bone Constable set up TayaSola as a Social Purpose Corporation (SPC). That means it’s “for profit,” but its primary responsibility is to the social purpose of the company, not the monetary bottom line (as is the case with an S Corp). She didn’t classify her business as a nonprofit because she believes recipients of TayaSola components need to be invested in creating innovative, sustainable solutions.

So she found a happy medium with an SPC. “I’ve never believed that you cannot make a profit and do the right thing,” Bone Constable says. “I don’t think that we have enough models of companies that do that.”

And so Bone Constable continues to help people help themselves. If there’s such a thing as karma, TayaSola’s light will keep growing brighter.