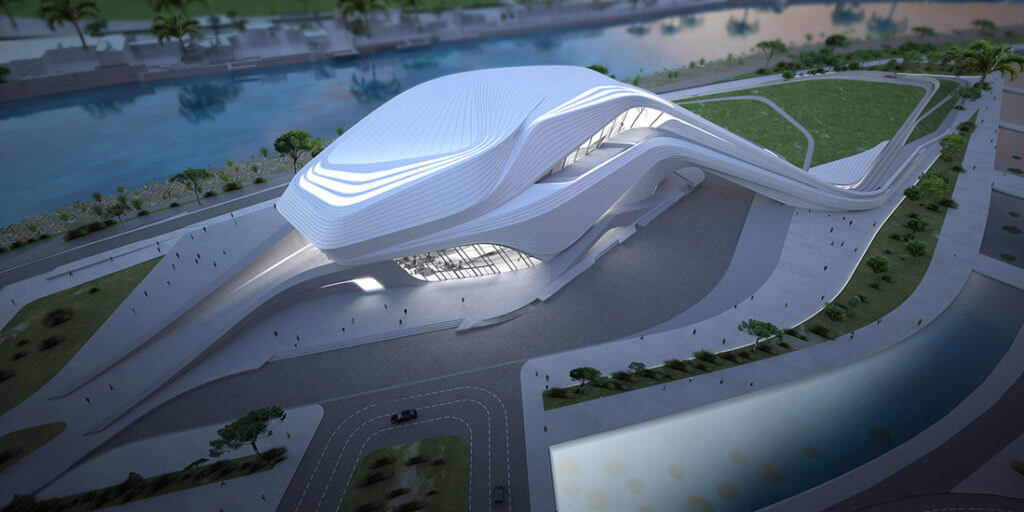 On the banks of the Bouregreg river in Morocco, the long-awaited Grand Theatre of Rabat will be completed later this year, transforming the skyline of the waterfront capital. Designed by architect Dame Zaha Hadid and her firm Zaha Hadid Architects (ZHA), working closely with several consultants, the theater—Hadid’s first project build in Africa—will stand as one of the late Pritzker Architecture Prize winner’s last and most enduring legacies.

The theater is part of King Mohammed VI’s national cultural-development program, which calls for integrated and sustainable development of the Bouregreg valley, including Rabat and its twin city of Salé, located across the Bouregreg river.

When completed, the complex will be the centerpiece of a dynamic mixed-use district, envisioned by King Mohammed VI, that will include world-class shopping, dining, and other cultural and recreational attractions. The integrated urban-development model is designed to exist in harmony with the heritage and environment of the site. On Twitter, Sir Simon McDonald, head of Great Britain’s Diplomatic Service, stated that the theater will be Africa’s “Sydney Opera House equivalent.”

“I am delighted to be building the Grand Theatre,” Hadid said when the project was finalized in 2010. “Morocco’s unique musical traditions and rich cultural history in the performing arts are renowned throughout the world.”

The design team’s challenge was to create a sense of naturalistic fluidity and an intuitive guide to visitor circulation flow. “Because the surrounding landscape is prone to seismic activity, ensuring structural stability was paramount,” says Reda Kessanti, senior designer with ZHA. “The theater is built as a ‘box in a box,’ in which the internal spaces are structurally isolated from the exterior. The concrete cladding is supported by a grid of ribs and a steel infrastructure spanning the building’s unusual shape. The building envelope is sculpted from the upper part of the amphitheater; its terrace offers a magnificent view of the valley.” Deep pilings also provide structural sturdiness in this riverine landscape.

“The form, which is both soft and strong, curves toward the ground and offers an outdoor amphitheater that then gradually merges with the surrounding landscape,” Kessanti says. “The Grand Theatre of Rabat obtains its energy from the Bouregreg river and integrates with the environment of the valley. The dynamic of the river is represented on-site in the landscape of the park that engulfs the theater as well as the amphitheater.”

Light is essential to the design, a departure from the stereotypical dark and boxy theater space. “Cove lighting snakes around the curvilinear facade, and skylights and large-scale glass entrances allow the building to glow from within,” Kessanti says. Inside the theater, floodlights emphasize the auditorium’s faceted golden walls, while outside, visitors wander through a stepped amphitheater subtly lit with continuous lighting at the stairways and balustrades.

Hadid was known for her innovative designs that were often difficult to get built—the Grand Theatre is designed in this tradition. Because of the building’s unusual shape and diverse programming needs, 3D modeling was essential. “The project started out using a traditional 2D format, but during the detailed design stage in 2014, local architecture firm Omar Alaoui Architectes recognized that the complex geometry of ZHA’s design would require deeper coordination in 3D,” Kessanti says.

“The team had to work fast to devise a BIM workflow using Autodesk Revit and LOD [Level of Development] 200, roughly equivalent to BIM Level 1, to produce all the construction documentation,” Kessanti continues. “However, the move proved problematic as the local construction industry at the time was not familiar with BIM, and the consultants for MEP [mechanical, electrical, and plumbing] and structures did not have departments with the necessary skills.”

ZHA set up a dedicated BIM group that worked together in live workshops to resolve the geometry of the building. A bespoke Revit plug-in, ZHA BIM, was developed to extract the original geometry from 3D modeling tools, including Autodesk Maya, and make it possible to attribute information and specifications to the 3D components.

“The process enabled us to achieve full coordination and rationalization of the design, resolving the complex double-curved surfaces into facets and changing materials to reduce costs,” says Harry Ibbs, head of BIM for ZHA. “The software helped us simultaneously visualize a lovely piece of architecture and made it a contractor’s dream to work with.”

As the building was going up on-site, consultants and local contractors were working in BIM and Revit, producing fully coordinated models with clash detection, Kessanti says. “We knew the model was necessary to save money for both the client and the contractor,” he adds. “Without it, we would have had to drill concrete walls and floors to work in the structure and the HVAC plumbing and electricity.”

Hadid’s sudden passing in 2016 has added significance to posthumous projects such as the Grand Theatre. When its stage lights go on later this year, the Grand Theatre, like Hadid’s other masterworks, will likely be heralded for many years to come, Kessanti says. Hadid’s vision “is obviously very influential in the world of architecture,” he says. “Very often copied but never equaled.”