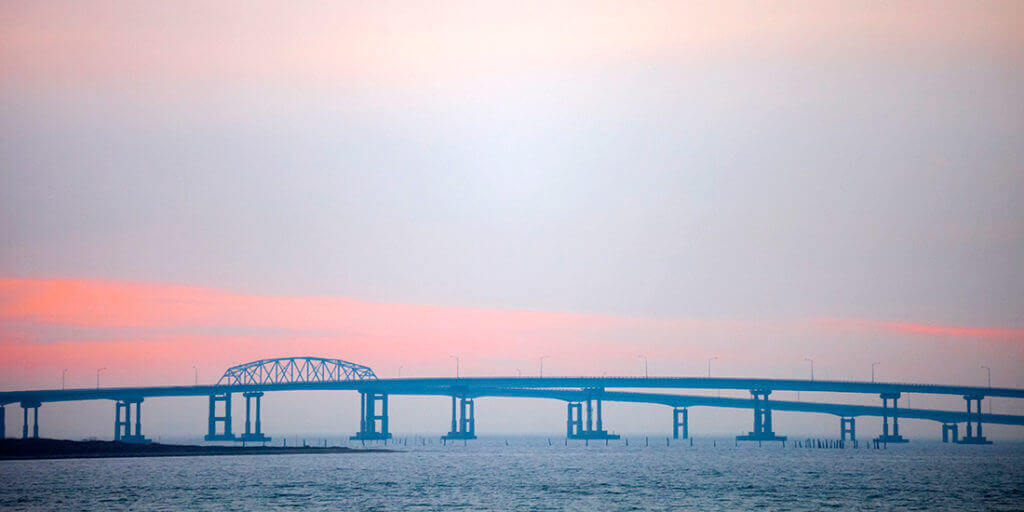 In early 2019, a tunnel-boring machine the length of a football field will begin chewing through the earth below the Chesapeake Bay in Virginia.

At a rate of 60 feet per day, according to the Virginian-Pilot, it will carve a 42-foot-wide, mile-long path 105 feet below sea level at its deepest. Once this behemoth machine moves 500,000 cubic yards of soil, the resulting tunnel will house two traffic lanes for the Chesapeake Bay Bridge-Tunnel that links Virginia Beach to the Delmarva Peninsula, shared by Virginia, Maryland, and Delaware. The new tunnel will be parallel to the existing one, which passes under the Thimble Shoal channel.

Multinational engineering firm Mott MacDonald is designing the $756 million tunnel and has partnered with builders Dragados USA and Schiavone Construction Company. It’s a complex design-build project: Challenges include setting up a construction process that minimizes disruption in an area dense in critical military infrastructure and providing visualization of the tunnel’s evolution for the integrated design-build team and community stakeholders.

Though it is not the simplest solution, using a tunnel-boring construction method will help mitigate disruption. Tunneling underground limits exposure to bad weather and the elements and requires less intrusive infrastructure that could otherwise clog maritime shipping lanes. But, “Going underground is significantly more complicated, versus a submerged tube tunnel where you’re basically just sinking a tube into the water itself,” says Jon Servedio, a senior specialist with Mott MacDonald who is serving as the project technology manager.

Minimizing disruptions means, in part, allowing traffic to flow as freely as possible across the 20-mile-long bridge and existing tunnel during construction. As such, Mott MacDonald is planning to limit highway shutdowns to one lane on the bridge and tunnel, and the construction team will work late at night whenever possible. The engineering team is currently running traffic-impact simulations and working iteratively through Navisworks to determine how it can evolve the plan to yield the least interruptions. After the team develops a traffic-management plan, it will use 3ds Max to render simulations.

With these 3D models, the team can say, “‘This is what it looks like when we’re shutting down the lanes and how it might affect traffic,’” Servedio says. “Then we can make changes as needed and republish those models to see if everyone’s concerns are being incorporated properly.”

With this new tunnel’s completion, the goal isn’t so much traffic relief but safety redundancies in case a major traffic accident or disaster blocks a single tunnel, according to the Virginian-Pilot. But even so, Mott MacDonald’s engineers “work with the future in mind,” says Servedio, so new tunnels and increased traffic capacity can be added as needed. Mott MacDonald also considered the impact construction could have on local ecology and produced an environmental report modeling the effects of the new tunnel and the expanded highway on marine life and terrestrial flora and fauna. 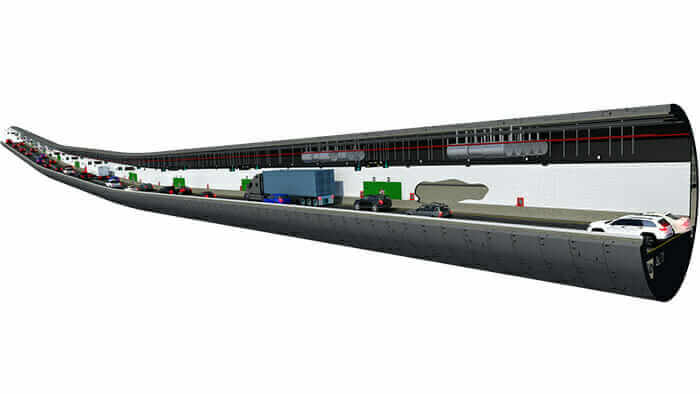 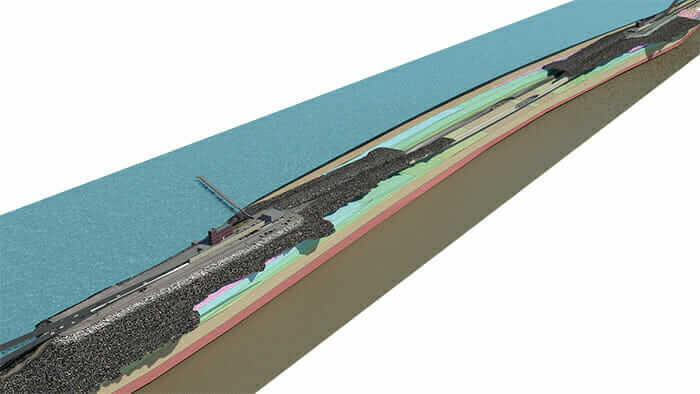 A bird’s-eye rendering of the entire project, with the new tunnel on the left and the existing tunnel on the right. Courtesy Mott MacDonald. 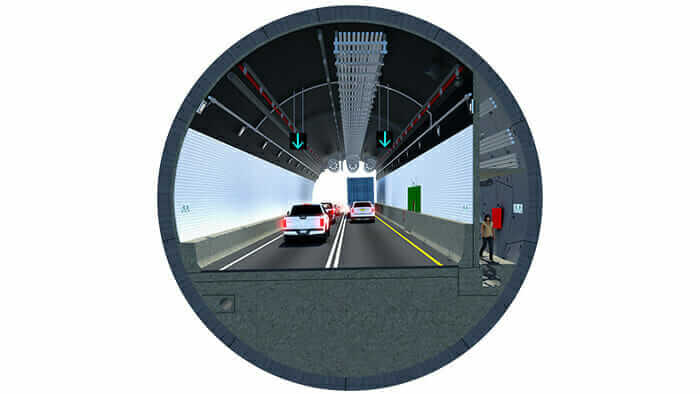 A cross-section rendering of the new tunnel. Courtesy Mott MacDonald. 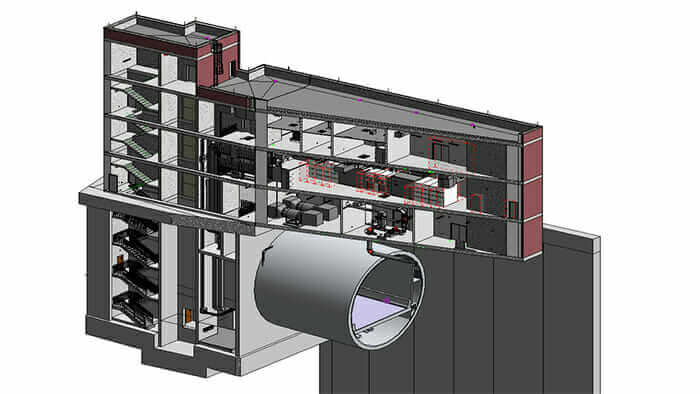 A rendering of a ventilation building, as it sits on the approach structure. Courtesy Mott MacDonald.

Digging Into the Process

To build the tunnel, Mott MacDonald’s builders will excavate an area at one end and pump out water so they can stage materials and equipment on a dock. Once the tunnel-boring machine is lowered into place, a hydraulic shaft will push it ahead as its rotating cutter wheel tears through the soil, which is carried out of the tunnel on a conveyor belt. Simultaneously, mining carts will bring in 9,000 concrete panels to line the tunnel in a series of rings, assembled by a robot. Finally, an outer layer of grout seals the concrete rings, protecting them from soil and potential moisture infiltration.

Mott MacDonald tested the quality and composition of the soil, compiling surface strata information in AutoCAD Civil 3D, which it then used to create geotechnical reports and a complete bore-hole profile. “That information allowed us to build a much more detailed and refined profile of the actual soil across the project,” Servedio says. “We basically just built off of what we’d gotten from the field explorations using the [Civil 3D] bore-hole plug-in.”

On such a large project with so many civic, public, and industry stakeholders, visualizing the path to a new Chesapeake Bay Bridge-Tunnel has been key.

The team used 3ds Max “to explain to the contractor and the proper authorities what the construction sequencing may look like and give them a better idea of what the ventilation buildings would look like when they’re eventually built,” Servedio says. “This software lets us create an animation so the contractor, as well as our team, can get a better idea of how things will be put together and staged—from when you’re running a tunnel-boring machine through the ground to the point where they start building up the infrastructure for the support structure.” The animation was especially useful for mollifying neighbors’ concerns about how construction might affect their ocean-side views.

Keeping everyone in the design-build team in the loop was a primary concern from the outset. “Everyone keeps a very open-door policy when it comes to collaboration within our firm,” Servedio says. “No one’s in their own ivory tower, not even the project manager who flies back and forth to Virginia at least once or twice a week.”

And working in a design-build partnership makes it much easier to get timely and accurate feedback from contractors. “The overall design benefits a great deal from the fact that we can find out, from a logistics standpoint, whether what we’re trying to do design-wise will actually work,” he says.

“Design decisions were helped a lot by the contractor’s feedback because he’s ultimately going to be the one building that element and knows what it would be like to service that kind of work in the future,” Servedio continues. “When we have feedback from contractors on how they might build something, it makes it easier for us to push the design toward how it should be built, in the easiest fashion, while still retaining the actual design vision.”