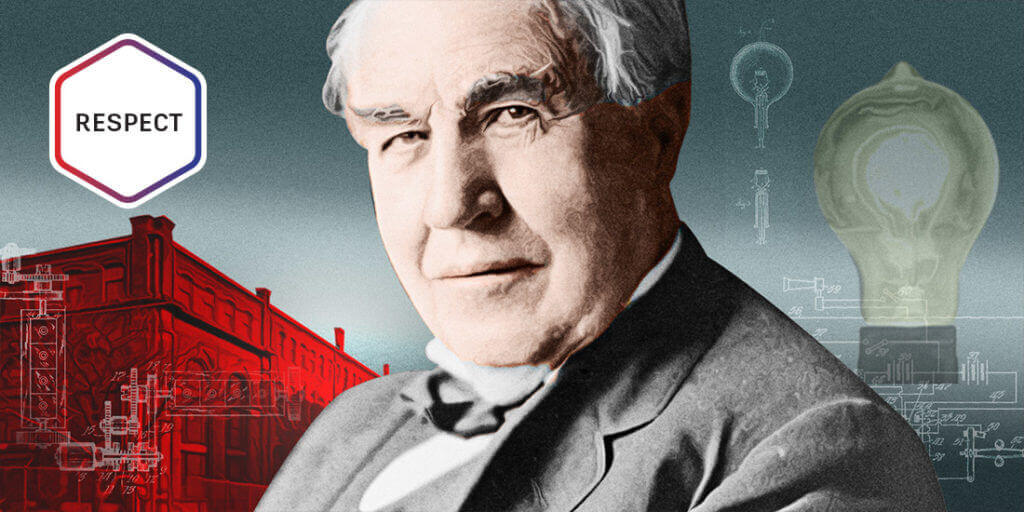 It’s impossible to overestimate the influence that Thomas Edison’s accomplishments have had on modern life.

Although Thomas Alva Edison (1847–1931) is best known as the inventor of the incandescent light bulb, the phonograph, and the motion picture, these innovations are a fraction of Edison’s legacy. More than 85 years after his death, his accomplishments in the field of industrial research and development (R&D) still resonate with scientists and engineers.

Edison started his career at age 15 as a telegraph operator in Port Huron, MI, and developed his first invention, a telegraph repeater, at 16. After years as an itinerant telegraph operator and sometime inventor, at 21, he came to New York City, where he found work as a repair superintendent at the Gold and Stock Telegraph Company. During this period, he developed numerous inventions, including the quadraplex telegraph transmitter, which could send two messages in each direction on a single wire. Selling the rights to this device for $30,000 was Edison’s first real breakthrough as an inventor.

With the income from the quadraplex-transmitter sale, Edison opened a workshop where he could develop inventions full time. When Edison was 29, the sale of an electrical-engineering firm holding several of his patents provided the funding to open his first development laboratory, in Newark, NJ. A few years later, he moved to another location in New Jersey, what would become the famous Menlo Park facility, and later to a larger site in West Orange. Edison did some of his most significant work in those labs, developing the incandescent light bulb and the phonograph—his favorite invention.

It was at the Menlo Park laboratory and workshop that Edison developed the working methods that were essential to the success of his inventions—it was, at its core, the first R&D laboratory. “Edison’s greatest invention wasn’t a physical invention, but a way of inventing,” says Jeff Schramm, PhD, who teaches the history of technology at Missouri University of Science and Technology. “His Menlo Park lab and especially the West Orange lab were the precursors of the modern industrial research-and-development lab.”

“The Menlo Park lab gathered together all the people, materials, and processes to investigate and develop technologies that would make a big difference to the world,” says Jim Bray, chief scientist at GE Global Research. “To my knowledge, this is the first time that such a conglomeration of people, resources, and facilities was created in one place to further technical inventions for a company.”

In his lifetime, Edison received 1,093 patents—more than any other person in history. Although Edison is the recognized inventor of some of the most significant technologies of his day, the team working under Edison’s direction was vital in bringing his ideas to fruition. Take, for example, the development of the light bulb. Through the spring and summer of 1879, and well into the fall, Edison and assistant Charles Batchelor tested countless materials in search of the ideal filament. In late October 1879, they succeeded with a carbonized cotton filament, producing a light bulb that burned for 14.5 hours. On Nov. 4, 1879, Edison applied for the patent on the incandescent light bulb, the invention that would bring him the most fame.

This new approach to technical R&D signaled a switch from the “lone inventor” trope to the collaborative, cooperative model of the Menlo Park laboratory. This model is still followed by General Electric (GE), which emerged from the original Edison General Electric Company.

“By the 1960s, a much larger, decentralized, and product-diversified GE led to the desire for research more closely aligned with product development,” says Chris Hunter, the archivist who manages GE’s historical records at the Museum of Innovation and Science in Schenectady, NY. Long after Edison was gone, GE labs continued to evolve with this collaborative approach. “GE Global Research, while focusing on product development, still researches the products you might see 10 to 20 years from now in lighting, jet engines, power generation, and other core GE businesses,” Hunter says.

Edison Brings Electricity to the Public

Edison’s advancements in R&D labs and electrical power can arguably be tied to his visit to the 1876 Centennial Exhibition. There, Edison saw the Wallace-Farmer dynamo, an early direct current (DC) generator, which inspired his investigation into this emerging technology. Many competitors were working to advance electrical power and exploit its business opportunities. Distributed electricity held benefits for both the industry and the public: Electric motors could replace the animals and noisy, fuel-hungry steam engines currently supplying power, and electric lighting could eliminate sooty candles, kerosene lanterns, and explosion-prone gas.

Edison was a proponent of DC power, which put him in conflict with the advocates of alternating current (AC) power—chief among them Nikola Tesla and George Westinghouse. Edison had pioneered electrical-power production and distribution systems before a viable AC model was available, and he was at the forefront of public discourse on the subject. But AC power eventually won out because it could be easily transmitted over long distances and was better suited for powering electric motors.

However, many Americans’ first exposure to electric lighting was with Edison DC systems (powering his patented light bulbs). His involvement was instrumental in the public’s acceptance of the new technology.

“Thomas Edison was already the most famous inventor in the world when he added to his reputation as the Wizard of Menlo Park by solving the ‘problem’ of the incandescent light bulb,” says Jill Jonnes, historian and author of Empires of Light: Edison, Tesla, Westinghouse, and the Race to Electrify the World. “He had a natural talent for self-promotion, and thus his devotion to public safety was well-known and much respected. If Edison was offering electricity as a new technology, it must be safe—so went the thinking of his adoring public.”

Until his death in 1931, Edison accomplished significant work in other fields. During World War I, his defense-related developments included sound-based aircraft-detection systems, improved torpedoes, submarine designs, and naval mines. His most enduring legacy remains those first steps into the world of electrical light, ending centuries of dependence on open flames for illumination. But equally lasting is his contribution to modern engineering: the dedicated industrial research lab.

Redshift’s “Respect” series celebrates engineers, architects, designers, and others who have made an enduring impact on their industries.

This article has been updated. It originally published in April 2017.