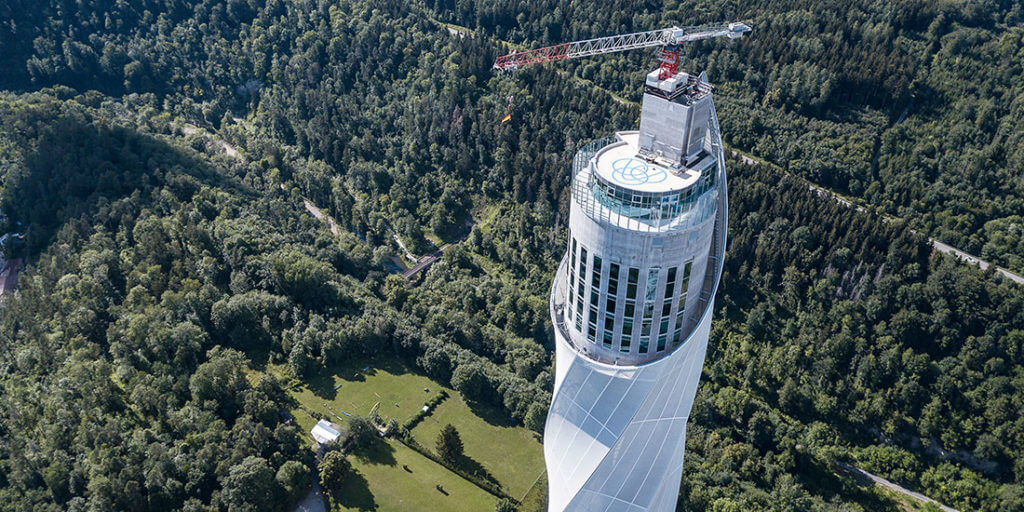 Every day, a new urban development the size of Manhattan is built on Earth; this growth explosion presents expanding cities with major logistical hurdles. To understand—and solve—the inevitable challenges of verticality, German multinational firm thyssenkrupp built the thyssenkrupp Test Tower in Rottweil, near Stuttgart. The structure, which stands at 246 meters (807 feet), houses Germany’s highest public observation platform and 12 shafts where engineers research and test emerging high-speed elevator technologies for the skyscrapers of tomorrow.

thyssenkrupp is testing elevators that run both vertically and horizontally. “In the future, cities will be bigger and buildings more complex,” says Beate Höhnle, tower manager. “This means it will be necessary to transport more people—and it’s precisely for these situations that we’ve created the MULTI elevator.”

The MULTI, the first design of its kind, operates in three shafts and is cableless, powered by electromagnets, and can change direction using an exchanger. This technology allows several elevator cars to run in the same shaft simultaneously and shrinks the maximum passenger wait time to just 30 seconds. As part of the tower’s sustainable-management emphasis, elevator braking energy is recovered and used to heat the building’s rooms.

A Membrane for Testing Extremes

The tower stands like an enormous drill bit, twisting its way into the sky above the lush, green landscape of the Black Forest. Underneath the building’s facade, however, lies sophisticated technology that was made possible by digital construction methods.

The thyssenkrupp Test Tower is the largest building ever built with an exterior membrane. Architects Dr. Werner Sobek and Helmut Jahn wanted to “throw a negligee over the cylindrical tube” and covered the body with a fiberglass fabric.

From a distance, the membrane looks like a closed concrete wall, but it’s actually a textile net that grows more transparent as the facade climbs the height of the tower. “We wanted to widen the view upward by using different-mesh widths,” says Maximilian Karcher of engineering and architecture firm Werner Sobek. 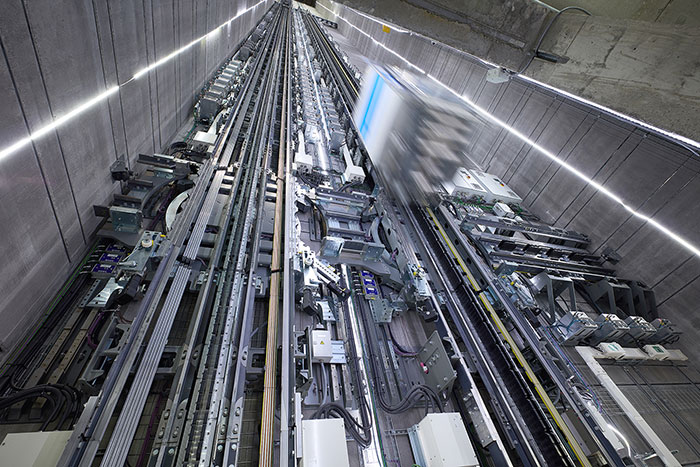 The MULTI elevator can function vertically, like a traditional elevator. Courtesy of thyssenkrupp Elevator. 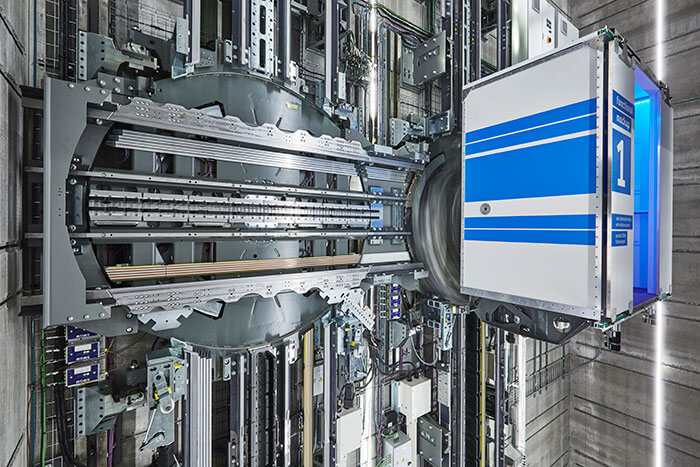 The fabric also protects the concrete shell from thermal stresses such as solar radiation and weathering, while its spiral rotation offsets wind vortex–induced vibrations so that the tower does not collapse. Inside the tower, a vibration damper can offset or induce vibrations to perform tests such as hurricane simulations. This feature allows the tower to sway, much like the way Dubai’s iconic Burj Khalifa skyscraper weathers desert storms.

Safe in All Scenarios

Approximately 2,700 metric tons of steel were used in the tower’s walls and ceilings to make the structure able to withstand these environmental extremes. “The interior of the building is so complex that we had to check possible clashes in advance using a digital model,” says Dr. Jan Niklas Franzius, who served as planning coordinator for the shell, constructed by the German company Züblin.

The complete building exists digitally as a BIM (Building Information Modeling) model in Autodesk Revit, which made it possible to use Autodesk Navisworks to detect clashes. The construction process was also digitized: Some components, such as the precast staircase, were assigned QR codes, so those involved in construction could track the materials at all times and know immediately if anything went awry on the jobsite.

The tower was built using a vertical construction method known as slip forming: It was pulled up from below and “slipped” into the air, concreted as a single continuous piece in a three-shift, seven-day-a-week, 24-hour-a-day operation. “You can’t afford a single work stoppage when using the sliding-construction method,” Franzius says, “otherwise the concrete sets.”

For safety reasons, no one was allowed to work underneath the sliding-scaffold system used in the slip-forming process, which meant that the entrance area at the foot of the tower was built at the very end of construction. “In order to guarantee the stability of the tower, we first had to fill openings such as windows with concrete,” Franzius says.

After the tower walls were complete, the ceilings were inserted from above using a crane. Despite a dizzying array of challenges, the tower was built in a record time of about two years, a process made possible through BIM, with the opening ceremony taking place in autumn 2017. Time savings and well-planned use of resources are two clear advantages of digital construction; in addition, the structure’s skyward design won numerous architecture awards for sustainable construction.

The tower awes visitors with its stunning panoramas of the surrounding countryside, but the real benefit of being perched on the edge of the Black Forest is proximity to 10,000 engineering students at the surrounding universities and scientists at neighboring research centers. This talent pool will have a part in shaping the cities of tomorrow and setting lofty standards for the megacities of the future.