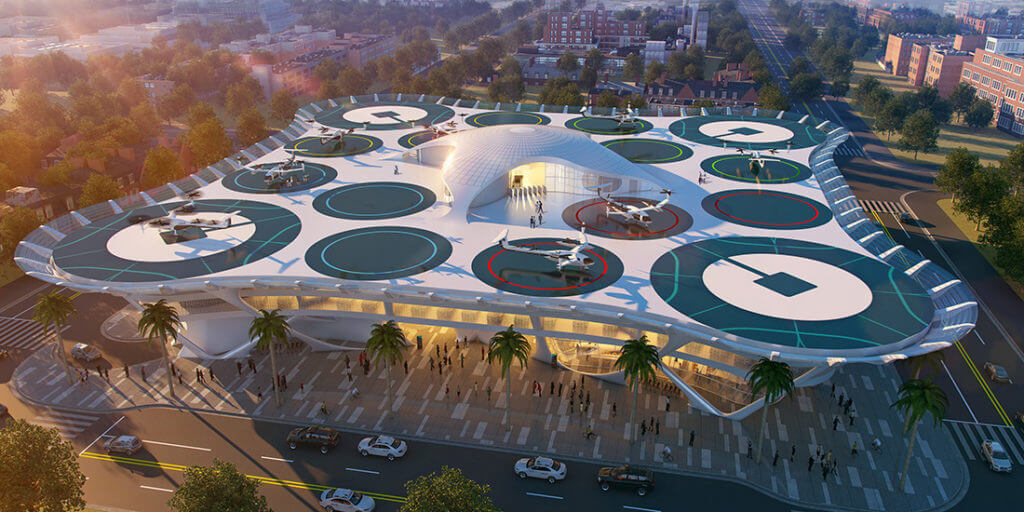 You’ve got a big meeting lined up, you’re running behind, and traffic is a nightmare. You pull out your smartphone to determine a transportation mode and route that will get you there on time. After an Uber sedan picks you up in your driveway, it delivers you to a nearby pad, where a helicopter-like aircraft is waiting for you to board. In moments, you’re airborne and on your way to work. This is the future of ridesharing, experts say, and it’s closer than you think.

Gannett Fleming, a century-old infrastructure-engineering firm, has taken the flying car from science fiction to a workable design that may be just years away from fruition. The firm’s SKYPORT concept was a finalist at the 2018 Uber Elevate Summit in Los Angeles and won a 2018 Good Design Award from the Chicago Athenaeum.

Gannett Fleming’s SKYPORT relies on electric vertical takeoff and landing (eVTOL) vehicles that operate from small-footprint landing pads built on or between existing buildings. The original project goal was to provide safe passenger throughput to move thousands of passengers per hour from a stadium event, with widespread adoption by 2028. The design is modular, flexible, and intended to link with existing forms of transportation and public transit. The centerpiece of the firm’s concept is called the “PAW”—a modular configuration with space for takeoffs, landings, drone charging, and passenger waiting areas. Depending on the needs of a particular area, a PAW can be replicated to multiply the stations available to customers.

Although it sounds futuristic, Paul Nowicki, Gannett Fleming’s president and chief operating officer, forecasted this idea as part of a visioning exercise about a decade ago. “I had written down two things—flying cars like The Jetsons and mining minerals from meteorites and the moon,” he says. “People laughed when they read my two items. I said, ‘Don’t laugh.’ Fast-forward about nine years later and we got a phone call from Uber.”

That call set in motion a multidisciplinary collaboration within Gannett Fleming. Drawing on experts in aviation, safety, noise, sustainability, and geospatial technology, the team designed a skyport that could be flexible, environmentally forward, and above all, safe. This builds on the firm’s experience in terrestrial transportation, including the PHX Sky Train people-mover project at the Phoenix Sky Harbor International Airport. The Sky Train features the world’s first transit bridge over an active taxiway—an out-of-the-box design idea that used Autodesk AutoCAD, Civil 3D, Revit, and other products for design, modeling, and collaboration.

This kind of design innovation will become even more necessary in the coming decades. According to a UN report, two out of three people will be living in cities by 2050, adding 2.5 billion people to the current urban population. This will require an estimated $94 trillion in infrastructure over the next 20 years.

“The idea behind the SKYPORT is urban air mobility as a way to alleviate congestion,” says Teresa Peterson, the firm’s vice president and a member of its Urban Air Mobility working group. “People are moving into our congested urban areas more and more,” she says. “We needed to find a solution that helps give people back time. Sitting in traffic is not a solution. You can’t easily find space for a massive new building in a crowded city, so finding creative ways to take advantage of existing urban spaces was key.”

To develop the concept, the design team looked at the data and regulations for existing heliports and the current research on eVTOL vehicles from companies such as Boeing, Embraer, and Bell. The concept is still so novel that it will require extensive trials—and developing new regulations around low-altitude airspace.

“Battery technology is the key here,” Nowicki says. “We’re looking at how to store and share energy. We had our power business line participate, to see how we could tie our sustainable energy efforts into this. Another big challenge was noise. That was very significant to Uber. The noise in aircraft blades is generally transmitted down toward the street; we designed a baffle system to mitigate it.”

Another hurdle is human psychology—how people move spatially, how they respond to signage and directions in a more technologically advanced age, and how they grapple with fears of flying or confined spaces. “We consulted safety and security experts,” Peterson says. “SKYPORT users could speak any number of dialects or languages. We can’t assume cultural norms. All of these things have to be imparted quickly. We talked about using color or other ways to give people information.”

Already, Uber will employ color with its Beacon system—not yet universally available—in which users match a colored screen on their smartphone with the color displayed by their driver, making it easier for car and rider to find each other in, say, a crowd at night. “It’s got to be intuitive; it’s got to be easy,” Nowicki says. “If it doesn’t make sense in an instant, people won’t use it.”

Getting people used to the idea of air taxis will be one challenge; getting people used to the idea of driverless air taxis will be another. This summer, Uber launched a helicopter program in New York City that takes passengers between JFK airport and lower Manhattan, cutting the average travel time by half or even 75%. The thinking goes that as that idea expands, so will passengers’ comfort with hopping in an aircraft to go across town.

“It’s going to move forward incrementally,” says Shane Campbell, transportation manager for Gannett Fleming and a member of the Urban Air Mobility working group. “The FAA is careful and cautious in its approach, as safety is of utmost importance. The industry knows that there will be lots of data that proves system readiness. You’re going to initially have piloted aircraft, and that’s where your data collection and testing will take place.”

But to achieve the vision—and to see the adoption rate rise and the price point fall—ultimately the eVTOL craft has to go unmanned, Campbell says. “Thankfully, we’re seeing a shift in the acceptance of mobility as a service. More and more people are willing to pay for this kind of mobility. As we advance this technology, the ridership and the adoption rate will go hand in hand.”