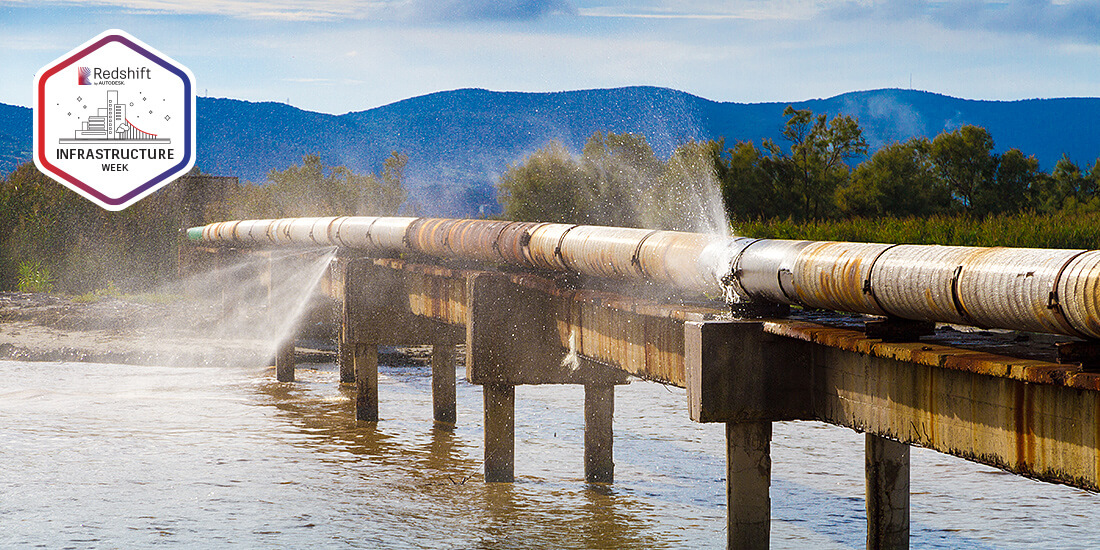 The hubs of American manufacturing—from shop floors and assembly lines to high-tech labs and chemical facilities—are connected by webs of rail, roads, and electrical power. In the popular imagination, the creation of physical goods requires strength and heft, a bit of blue-collar can-do attitude, and innovative technological solutions.

What’s rarely discussed, but equally important, is this sector’s need for water and how the nation’s aging network of pipes, treatment facilities, and wastewater plants provides a crucial component of the industrial economy.

“We typically think about highways and transit systems when we talk infrastructure, and those are very significant needs,” says Robyn M. Boerstling, vice president of infrastructure, innovation, and human resources policy for the National Association of Manufacturers (NAM), part of a coalition seeking to change public perception of essential infrastructure. “But it’s not just roads and bridges and hard assets. Water, like digital infrastructure, is key to production.”

This crucial need has led nonprofit United for Infrastructure (UFI), an industry partnership that includes NAM, to promote a focus on water as part of its mid-September “A Week to Champion America’s Infrastructure” conference. Although energy and transportation typically get all the attention, water is vital to the manufacturing ecosystem. According to research from the Value of Water coalition, every day an average US business is without water, it loses $230 in sales per employee; that number skyrockets to $5,800 per employee in water-intensive industries.

Sadly, that’s an even bigger problem than it was a decade ago. The American Society for Civil Engineers (ASCE) found that there are roughly 240,000 water-main breaks across the United States every year, each with the potential to close a manufacturing or an industrial facility. In 2019, $7.6 billion of treated water was lost through the nation’s leaky pipes.

“These businesses can’t exist without water,” says Greg DiLoreto, an engineer and former president of the ASCE who recently gave the nation’s water infrastructure a D grade. “At places like Intel, water is a critical component to business.”

The United States has made big investments in water efficiency for homes and industrial sites, Boerstling says. But the pipes and systems that get water to those homes and businesses—the crucial infrastructure that’s underground and out of sight—receive inadequate support and need more robust and additional funding mechanisms.

Part of the strategy to rectify that shortage is avoiding waste and preserving this precious resource. Semiconductor manufacturers, data centers, and other high-tech manufacturing sites that are critical to the digital economy require ultrapurified water. A typical semiconductor plant may go through 2–4 million gallons of ultrapure water per day, according to CDP. A survey (p. 33) of manufacturers found that 45% cited physical water risks as key issues.

Although these high-tech customers need large volumes of extremely pure water, they’re not driving an increase in domestic water usage, DiLoreto says. If anything, by recycling and reusing water in increasingly sophisticated ways—data centers, for example, have experimented with evaporative cooling and building their own wastewater treatment plants to cool servers with recycled sewage—they’re part of a general decline in water usage. The price of water has actually increased, he says, as local utilities struggle to meet the growing gap in funding required to bring systems back to a state of good repair. (DiLoreto estimates that gap to be $47 billion.)

The problem in patching pipes and upgrading infrastructure lies in funding. “No investor is interested in getting water pipes fixed; that’s not how you typically get a good return on your investment,” DiLoreto says. Water networks are also decentralized: The United States has more than 53,000 water systems, more than half of which are stand-alone operations serving fewer than 500 people—small players that struggle to raise money.

“There are pipes in Washington, DC, that have been there since the Civil War,” he says. “Nothing should be in the ground that long.”

To close this funding gap, NAM and other industry advocates suggest creating more public-private partnerships to boost private-sector investment in water infrastructure. Programs such as the 2014 Water Infrastructure Finance and Innovation Act can help government entities unlock additional funding for upgrades and investment.

Boerstling also suggests removing some federal limits on investment. For example, the Environmental Protection Agency provides limited federal resources through Clean Water State Revolving Funds, but the program limits private activity bonds. Lifting these caps could go a long way toward narrowing the funding gap; a PricewaterhouseCoopers study found that eliminating these caps and making other regulatory changes could bring up to $68 billion in incremental investment in water and wastewater infrastructure.

City and local governments have also increasingly taken it upon themselves to find new ways to raise funding—especially those that are prioritizing better infrastructure through the lens of a larger economic development strategy. CDP data found that 80 cities have reported at least $9.5 billion in water projects in recent years. Phoenix issued $400 million in local bonds to support water-infrastructure projects as part of broader drought-resiliency measures and to help supply a plant that will make supplies for Apple. And Loudoun County, VA, home to one of Google’s 13 North American data-processing centers, is looking at constructing a wastewater treatment center with funds from the county’s Capital Improvement Program.

Inaction on the federal level is another reason to engage private funding sources. Congress, despite constant conversation about infrastructure investment, hasn’t moved on a much-needed, comprehensive solution that could meet more than $1 trillion in infrastructure funding needs over a 10-year period. “Relying on the federal government for large sources of cash for infrastructure just isn’t where we are now,” Boerstling says. “It’s disappointing that water is a lot harder to fund.”