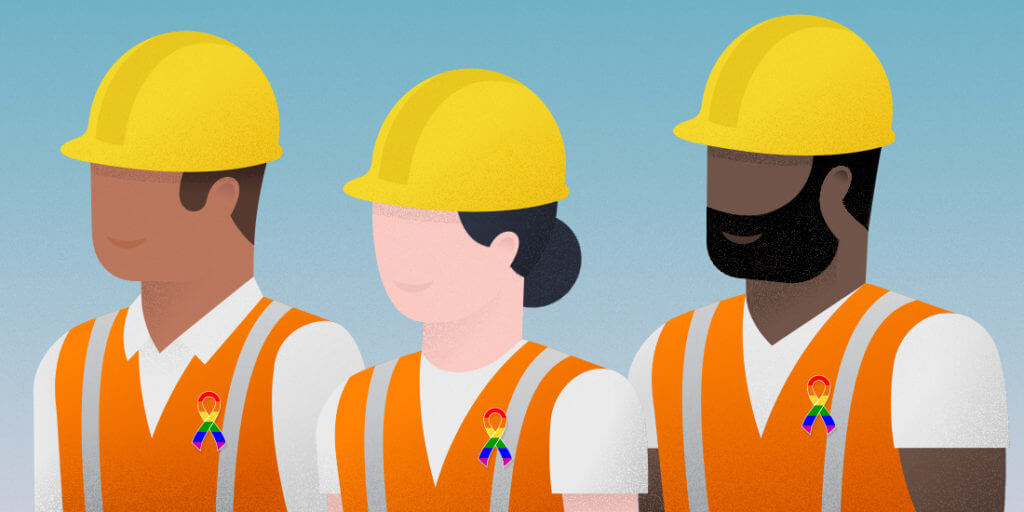 The construction business gets a bad rap for not being diverse enough. True, the sector may lag behind other industries, but construction companies are beginning to foster a more diverse and inclusive workforce—and earn the returns.

The business case for diversity demonstrates that it boosts employee engagement, job satisfaction, and performance. In the 2018 report “Delivering through Diversity,” McKinsey finds that firms with diverse executive teams are up to 33% more likely to outperform their competitors.

Diversity and inclusion (D&I) initiatives can also deliver intangibles such as innovative ideas and creative problem-solving. Diverse perspectives quash companies’ tendencies to do things the way they’ve always been done and reduce the risk of groupthink.

“As diversity increases in our industry, we will see increases in productivity because we will see new ideas being brought forward,” says Jennifer Suerth, vice president of technical services at Pepper Construction Company, where 30% of employees are women.

Productivity gains begin when companies step up recruitment and retention and improve workplace D&I. The result is a more efficient and effective workforce where all employees are supported to work to their full potential.

The Importance of Diversity and Inclusion in Construction Is Paramount

When Cliff Cole started his career in construction more than 17 years ago, he wasn’t really thinking about race—until he landed his first job in Asheville, NC, where his boss had warned him not to visit a certain part of the state because it wasn’t safe for him. Not exactly what a young, vibrant, eager college grad wants to hear.

Now, as VDC director at PENTA Building Group, Cole is passionate about diversity, equity, and inclusion in the construction industry. He believes that with diversity come diverse perspectives, which are sorely needed to help the industry evolve and innovate.

Cole recommends that construction companies educate themselves on what unconscious bias looks like, what diversity and inclusion looks like, and why equity must be included in that equation to make real changes in the industry.

“You have to be able to give the employees a voice to feel like they are included, that they belong in the conversations, he says. “We have to be able to look at how we attract, hire, and retain the talent that we currently have. People are leaving this industry. It’s a tough industry, but we have to be better at making it so it is a diverse and inclusive culture throughout the organization.” [Watch the video to learn more about Cole and his advice for the construction industry.]

Despite being one of the largest sectors in the global economy, the $10 trillion construction industry has fallen behind in productivity growth, which slowed to 1% last year. The result: poor performance, project management, and execution, as well as cost and time overruns.

The problem can only get worse in the United States, where construction’s contribution to the economy has hit a seven-year high point, yet companies complain about a shortage of skilled workers.

Recent surveys indicate that the industry has a long road to a diverse workplace. EDI professionals across many global locations identify several underrepresented and protected groups. In the UK, the Equality Act includes nine protected characteristics that employers must consider: age; disability; ethnicity (often cited as a focus on inclusion of Black, Asian, or minority ethnicity [BAME] individuals and groups); gender; gender identity or transgender; sexual orientation; religion and belief; marriage and civil partnerships; and supporting maternity and paternity provisions (or family-friendly policies).

Across each area, metrics and benchmarks can be problematic. In 2016, just 3.2% of UK building-industry employees identified as BAME, and less than 5% of the construction workforce declared a disability. This does provide a marker to organizations to see if they reflect these talent communities.

Barriers for the LGBT community are also prevalent. In the United Kingdom, LGBT professionals comprise just 2% of the construction workforce. In 2016, 51% said their sexual orientation prevented them from progressing in their careers and 71% had heard repeated LGBT-oriented insults at work. Not surprisingly, only 7% of LGBT workers would recommend the industry to recruits. (LGBT workforce data is not collected by US-equivalent agencies.)

Changing these demographics calls for changing attitudes. “People being able to be authentic at work enables them to flourish,” says David Isaac, partner and head of the advanced manufacturing and technology sector at the international law firm Pinsent Masons. “This is an opportunity to get the best talent into the business, and that translates to the bottom line. That is a compelling case, whether for LGBT, gender, or Black, Asian, and minority ethnicity inclusion.”

Construction companies have committed to initiatives designed to foster D&I, often packaged in EDI action plans. These programs include focus groups, coaching, training, and mentoring, as well as networking and career development.

“Our EDI Action Plan has helped the business to focus on key initiatives that support an inclusive culture, which we know takes concerted and collaborative action,” Chapman-Harris says. “Inclusion, unfortunately, doesn’t just happen.”

EDI actions have produced a cultural shift at Mott MacDonald, with 81% of UK staff feeling that their colleagues take EDI seriously and 72% saying EDI policies are effectively implemented. EDI policies have also been adopted by clients, contractors, and suppliers. “We see EDI aspects embedded in our client tenders,” Chapman-Harris says. “We are also in turn increasing our expectations with our own supply chain.”

Providing a Network of Support for Individuals

For individual employees, change comes slowly. Isaac, a past chair of Stonewall (Britain’s leading LGBT charity) says: “There are not a lot of LGBT people in management positions now. It’s also important that other people in leadership positions act as allies. Stonewall has found that senior allies have been instrumental in driving change.”

Employee networks support inclusivity in all aspects of the industry and provide safe haven for dialogue among minority professionals—including LGBT staff and their straight allies. Jamie Olsen Ferreira, an associate in the construction and engineering department at Pinsent Masons and co-chair of the LGBT construction and infrastructure network Off Site says these networks have provided assistance and encouragement to major construction companies in the launch of their own internal networks.

Competitive advantage may ultimately go to companies whose workforces look more like the communities where they work. At Transport for London (TfL), the authority responsible for one of the largest capital-investment programs in the world, Isaac has observed Mayor Sadiq Khan’s commitment to diversity. “His commitment percolates down,” Isaac says. “It is a very diverse workforce that extends to the projects on the ground and helps create a conducive working environment where people are very effective.”

D&I infuses organizations with new ideas, fresh perspectives, and a willingness to consider alternatives. With a more diverse workforce that is better at problem-solving and decision-making, construction companies can outperform their peers, financially and fairly—with inclusion and respect.

Autodesk Senior Editor Missy Roback contributed to this article, which has been updated. It was originally published in June 2018.