Salt Lake City ski maker WNDR Alpine is hoping to transform the industry with its new ski, which is designed and made using a novel—and plentiful—biobased material. Microalgae oil is the secret sauce in the company’s backcountry skis, replacing petroleum in the plastic of the ski’s core and sidewalls.

The new material—which was developed by Checkerspot, the biotech firm that owns WNDR Alpine—offers improved performance along with a smaller footprint. It’s also the first materials advancement in the ski industry since the 1950s, but WNDR hopes that other sporting-goods manufacturers will join the party sooner than that. “We have no desire to be exclusive with this technology,” says Matt Sterbenz, general manager of Wintersports at Checkerspot. “Our goal is 100% to democratize it.” Watch the video to learn more.

Matt Sterbenz, General Manager of Wintersports, Checkerspot: Backcountry skiing came to me originally through the pursuit to find uncharted territory. As I progressed from a professional role in skiing to a more recreational one—and, ultimately, a product designer—I found myself being more naturally drawn to the environment of the backcountry, the elements of nature. That ambiance was really inspiring.

Scott Franklin, Chief Scientific Officer, Checkerspot: Checkerspot came about four years ago. We were wondering if the platform that we had spent a lot of time working on—about eight years—could be used in the materials-science space. There was a lot of fertile ground that we could plow.

We knew that we would build a brand. We didn’t know around what, but we knew we needed a brand to animate our technology.

Sterbenz: WNDR Alpine came about largely because we saw an opportunity to advance the unique biobased polyurethanes that we had started to develop in the lab at Berkeley. We saw an opportunity where this outdoor community would be really receptive to biobased alternatives that were performance applications, specifically built. And, ultimately, the goal was, let’s not shock the market with a shape that they’ve never seen before. Let’s, instead, introduce a ski that they’re familiar with: its outline geometry, its flex profile, its weight, and all of that. But let’s lean into the story of the new materials because no one, until now, has skied on materials derived from microalgae.

Grace VanSurksum, Mechanical Engineer, Checkerspot: I like being part of something that is trying to change the way that our world is functioning right now, which obviously isn’t working the best. And this small idea, this simple idea of taking algae and making oil and then making materials with that and then giving that to the consumer is showing people that this company that’s being extremely conscious of their footprint on the planet is also making money. And that’s huge, I think.

Xan Marshland, Manager of Brand Development, Checkerspot: This is the first time ever in the history of ski building that we’ve had access to purpose-built materials that are derived from a new origin. Essentially, we are our own supply chain here, and that gives us a lot of new levers to pull in terms of designing for performance characteristics that we desire. In addition to that, our materials happen to come from a renewable resource, so they’re inherently lower-impact than incumbent petroleum-derived materials.

Daniel Malmrose, Director of Product Innovation, Checkerspot: Building things off of petroleum products, you’re very limited on what the industry can provide. We’re starting with our raw building blocks from nature, so there’s way more building blocks. Our goal is to be zero-waste, and our goal is to feed as much of that back into our products as possible. And so we’re making headway, providing renewable sources, algae being one of them.

Garrett Witmer, Mechanical Engineer, Checkerspot: The process in designing the Intention 110 usually starts with the consumer or the people that are putting on these skis. Their input usually drives the design, and then it’s measured in every way that we can here to confirm what we’re seeing out in the field in order to further that design into the product that we envisioned from the start. 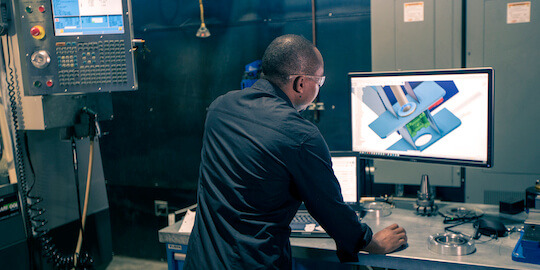 Learn about the technology behind sustainable manufacturing.
Learn More

Learn about the technology behind sustainable manufacturing.
Learn More

Malmrose: We use [Autodesk] Fusion 360 to quickly iterate on our product development process. We CAD, CAM, cut apart, test it all within a couple of days.

Witmer: It allows us to do all the rapid prototyping that we thrive on as a start-up company and an innovative company.

Sterbenz: As a company, we have no desire to be exclusive with this technology. Our goal is 100% to democratize this innovation. So, to get other partners on board, to start working with our materials, to free them of the material limitations that they’re currently succumbed to is a big part of our vision. But I think what would be really meaningful is that we can show the industry that, through biology, we can solve some of these bigger, multidecade problems.