Gary J. Nelson was one of just 14 Black students in his 1977 freshman architecture class.

“I went to college in Chicago, a well-known architecture school,” he says. “First week, the professors took each of us into their office and said that architecture wasn’t for us and that we needed to either change to urban and regional planning or to engineering because we were more than likely not going to pass the course.” Of the 14 students, Nelson is the only one who remained in architecture, going on to become licensed in 20 states.

Although Black people represent 13% of the US population, only 2% of registered architects are Black. Sometimes this discrepancy traces back to overt institutional racism, like what Nelson experienced. But broader societal issues are also at play: socioeconomic barriers, limited access to art or drafting for students in poor areas, a lack of exposure to the field, and too few role models. Principals of architecture firms have the power to close the gap by transforming their recruitment practices, providing mentorship, and taking a hard look at how employees are promoted.

Michael Marshall, design director and principal at Michael Marshall Design in Washington, DC, says that leaders of firms should view increasing diversity in their teams as a positive change toward creating an equitable workplace—one that’s also good for business. “I would make affirmative hires of minorities, in particular African Americans, at all levels, with the idea that the client base of the world is changing and the firms asking for our services want teams that look like them and share some of the same life experiences,” he says. “This is good business sense and a way to stay competitive.”

The historic monoculture of white males in architecture is being pushed to change to keep up with the world it serves. Here are three ways firms can make it happen.

One way principals can increase Black representation in their firms is by changing recruiting practices. Nelson says that principals in charge of hiring sometimes make snap decisions based on implicit bias. “Firms hire sometimes based on looking at a name on a resumé, and they’ll throw it in the trash because they make assumptions or don’t want to bother learning to pronounce an unfamiliar name,” he says. 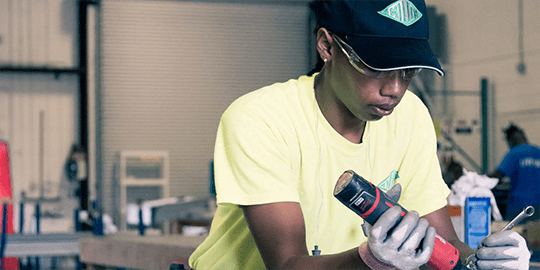 Explore Autodesk resources for cultivating a diverse workforce and a culture of belonging.
Read More

Instead, Nelson suggests using “blind resumé and portfolio reviews, where HR eradicates the names of applicants on resumés.” This makes initial consideration more equitable, adjusting for implicit bias. Nelson says it’s also important for principals to recruit from colleges with large Black student populations or from historically Black colleges and universities (HBCUs). “You’re not going to find too many African American architecture students at Kansas State University, for example,” he says. “Go to an HBCU like Hampton University, or go to programs like Syracuse or UCLA—schools that have more African Americans and other minorities enrolled in architecture programs.”

Principals can boost the number of Black architects through representation and mentorship. Placing representative role models in leadership positions helps students and interns of color see what’s possible for them and get inspired to advance to those positions someday. “I think it has been easy in the past for leaders of firms to see themselves in the next generation,” Marshall says. “And just optically, if you do not look like them, they cannot make the leap, right?”

June Grant, design principal at blink!LAB architecture in Oakland, CA, says it’s important to provide mentorship to emerging Black professionals—and equally important to ensure that those mentors are culturally competent. “Usually, as an employee, you are left to fend for yourself, facing cultural aggression and trying to find your way in the profession,” she says. “Without a mentor to guide you—a mentor who understands cultural differences, who understands that you are working in a Eurocentric environment—a firm that does not have a diversity-and-inclusion policy in place is a very difficult world for an African American to navigate.” This underscores the need for a diverse leadership that understands the specific hurdles that people from different cultural backgrounds face.

Principals can increase the numbers of Black architects in their ranks by ensuring an objective and transparent path to promotion. Grant says one barrier to promotion is underrepresented groups getting pigeonholed at lower levels because of a lack of experience. As an associate principal at AECOM prior to opening her own practice, Grant says she was fortunate to work alongside mentors who guided her as she advanced in her career, but not all emerging talents are lucky enough to have access to the same resources—and some are left floundering.

“How do the people in charge get experience?” she asks. “At some point, that person did not have experience, so how did they get it? It had to be someone or a program that was put in place that allows new entrants to rise up. Without having a pathway for access for new entrants, what you have is a system of exclusion.”

Nelson urges principals to have an actual plan in place detailing how junior members of the firm can become architects. “If somebody comes in and wants to be a principal, take the time to mentor that person toward that opportunity,” he says. “Give them the best chance to become a principal—not just lip service, but actually have a plan toward that goal.”

Transparency is critical to promoting diversity at upper levels. Point number 7 of the National Organization of Minority Architects, Arizona Chapter’s 10-point Call to Action for Diversity and Inclusion (which Nelson helped write), is: “Eliminate subjective promotions and partnerships. Provide actual identified measurable metrics and paths toward upper management and leadership for all staff.”

This process reduces “political” promotions based on connections and subjective preferences that shut out a diversity in leadership positions and keeps those ranks white. “In Phoenix, there are only one or maybe two Black principals out of the 13 Black architects registered in Arizona, from the approximately 2,164 total licensed architects in the state,” Nelson says. It’s clear that not enough is being done to cultivate Black representation in the leadership ranks of the profession.

Increasing the number of Black architects will be good for the Black community, for the profession of architecture, for the broader community, and for the built environment. “The more different types of people that are practicing architecture, the more we are going to have new and different solutions,” Marshall says. “It’s the reason why we have rap music, which uses the technology not of instruments, but of record players and boomboxes, which is what people had to work with at the time.”

Just as rap was a new innovation in music that came from the Black experience, Marshall says the field of architecture could benefit in the same way. “The more that people from different backgrounds are included, the more thinking outside the box will occur,” he says. “It’s important to have as much diversity as possible for innovation.”