In research, goals are often amorphous. Work doesn’t follow the traditional business sequence of setting time-based objectives. Instead, innovative products require open-ended exploration and experimentation. How do you reconcile the two?

I’ve found that rather than trying to tame researchers and school them on the lessons of business, you should flip the script. Provide the research department with a direct connection to the customers for whom they’re dreaming up solutions. Then, help product teams appreciate the value of failure and iteration. Finally, make sure the two are well connected throughout the journey. This mindset and organization shift will lead to better product innovation.

Here’s how we did it at Autodesk and what we learned.

In the beginning, we tried to keep research relatively independent from the rest of the company because we thought of research as the engine that would bring the big ideas down the road. Most businesses have goals that are too short-term for traditional research departments. We were there to do the big thinking, so we said, “We’ll go off and think and create beautiful things, and you’ll be really excited about them one day.”

What happened instead is that we arrived with a tray of goodies nobody wanted or understood. We had been working on these great initiatives that were going to lead innovation for our company—or at least that’s what we thought.

After some reflection, we realized we needed to tie the product teams and the research teams together in a way that gave everyone skin in the game from start to finish—from one end of the research-and-development spectrum to the other. So we created advisory boards to guide our work. These boards were defined by particular industry-level focus areas and staffed by experts who represent product, business, and research. We wanted a variety of voices with an array of experiences to help shape the future of research.

Fast-forward, and the end result from this process surprises no one because the board has tracked its progress from inception. The members not only keep abreast of setbacks and failures, innovations and successes but also influence any course corrections.

Thus, when the product reaches its final stage, everyone has taken part in it. The transition from something that was research to something that is a product happens organically. You end up with this group that has thought for years about these advances and worked at them from all sides, and that fundamentally makes a company more resilient and better prepared for whatever may come.

So how does it work? Here are five ways leaders and managers can and should embrace failure and resilience for healthier, more innovative product development.

Let me give you an example. Say you want to tackle a grand project, such as generating less waste on a construction site. That’s a definitive goal, and if you achieve it, you’ve done something good for the world. Do you, as a leader, restrict your employees to using an existing set of tools to accomplish that outcome in an appropriate timeline? Or do you let them wildly imagine new possibilities, create new technologies, and innovate new processes that could change the whole construction industry?

What you see here are two competing elements of research and development in business: One side says you should do something in a concrete and measurable manner; the other says you should choose to do what is open-ended and exploratory.

The right answer is a tension between those two styles. As a leader in your business or field, you should constantly pull one way or the other until you get a succession of projects at different points along the spectrum—those that guarantee solutions for your clients’ concrete needs and others that may be disruptive or well outside normal lines of reasoning.

2. Step Out of the Way of Innovation

Some leaders naturally feel drawn to the side of direct, measurable outcomes. You want to guarantee a solution to a particular problem or issue on a particular date. That’s understandable. But if you define the question too narrowly, you won’t fully explore the space of solutions. You could become myopic and go directly down to the thing you’re trying to achieve.

However, it is possible that adjacent to that thing you think you want, and have just engineered, is something far better. Maybe it doesn’t use a traditional methodology. Using a less linear approach will require you to do riskier things. Sure, the probability of success will be much lower, but the possibility of creating a much grander solution than what you originally thought is also real. That’s when you, as a leader, have to get out of the way of the expected outcome and let your people explore.

3. Embrace Failure Early in the Project

But that doesn’t mean you should take a conservative approach to building things out and experimenting. It means you need to fail right and fail in the earlier stages so that you can do more research and find all the knowledge gaps. Failure doesn’t mean you’ve failed to produce a working prototype. It means you’ve learned something valuable about the problem. You’ve acquired knowledge.

One of the unique things about researchers is that they don’t often come in contact with customers. That’s part of the structure: They work on big, open-ended ideas. Project people work closer to the end result, with clients and brands.

But sometimes it’s helpful to bring customers into the early-stage results, too, to show them what can be done together. When some of our Autodesk research gets closer to being tested or released, we bring in large customers and let the researchers see their solutions being enjoyed and used. This leads to further valuable learnings.

We did a project with Formula One a few years ago. There were a bunch of researchers on the team who were big motorsports fans. They got to see the stuff they had been working on deployed in a real environment. That intrinsic driver and motivator rewarded both ends of the spectrum. It reinforced their work with concrete results. 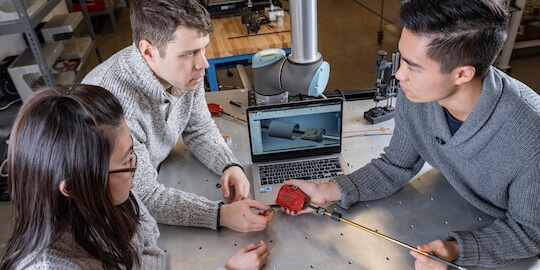 5. Develop a Portfolio of Possibility

Inevitably, some things won’t work. But it’s vital that your company has the capacity to understand the failures and rebound from them. Failure is the ultimate teacher, so don’t let it slip through your fingers. Use each setback and failure to build what I call a “portfolio of possibility.”

This portfolio is a space where great ideas that didn’t make it past early stages of execution live for future use. We have designed programs that were pretty big breakthroughs for us, but clients were slow to adopt them. Then a few years later, suddenly they were what everyone wanted.

As things change and demands evolve, having this portfolio of possibility allows you to grab onto ideas and continue growing them. You’ll learn that the breadth of experimentation is intrinsically breeding business resilience. If something fails, your company has enough resilience as long as you have more than one idea in your portfolio of possibility. And if research and product work hand in hand, that backup idea is even more likely to be both innovative and ready to accelerate into production.