In the 150 years since its construction, the US Capitol Dome in Washington, DC, has survived snowstorms, hurricanes, unrelenting sun, a 2011 earthquake, and the Civil War.

The US Capitol building stands as the eastern bookend to the National Mall, two miles opposite the Washington Monument; it’s also where the U.S. House and Senate convene. The neoclassical Capitol, designated as a National Historic Landmark, is crowned by its iconic Dome. But by 2013, the Dome had water leaks rusting the ironwork, seeping through to the Capitol Rotunda. A major Capitol Dome restoration was long overdue.

After two years of construction, current Architect of the Capitol, Stephen T. Ayers, fixed the Dome’s last finial in October 2016—well ahead of the January 20, 2017, inauguration of incoming U.S. president Donald Trump. The project was the culmination of years of dedicated planning and rehabilitation by engineers, conservators, painters, and architects.

The original US Capitol building had already withstood calamity, partially burned by the British during the War of 1812, by the time of the original Dome’s completion in 1823. The early version—designed by the third Architect of the Capitol, Charles Bulfinch—was a much smaller and lower structure than today’s Dome. And over time, that Dome’s wood and copper overlay was no longer proportional to the size of the expanding Capitol building. It was also a fire hazard.

Between 1855 and 1866, the government reconstructed a new Dome, three times the height of the original, using nearly 4,500 tons of cast iron. Philadelphia architect Thomas U. Walter (the fourth Architect of the Capitol) led the design, and principal superintendent of construction and captain in the Army Corps of Engineers Montgomery C. Meigs managed construction.

In the early years, Walter and Meigs steered the U.S. Capitol Dome construction through their own infighting and design changes, including the creation of the double dome for better support. Inspired by Europe’s great domes, such as the Pantheon in Paris, Walter altered his earlier design, lowering the height of the Dome from 300 feet to 287 feet to accommodate the larger Statue of Freedom and its tholos on top. Construction continued through the Civil War because Abraham Lincoln wanted the work to proceed as a symbol of the nation’s endurance. 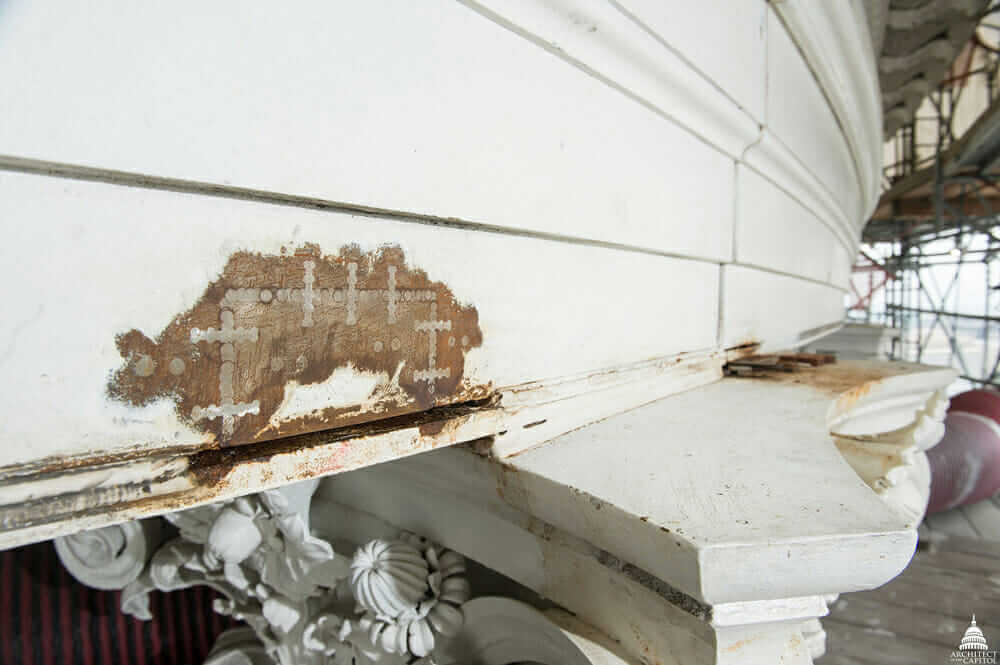 Lock-N-Stitch patch on the U.S. Capitol Dome. Courtesy Architect of the Capitol. 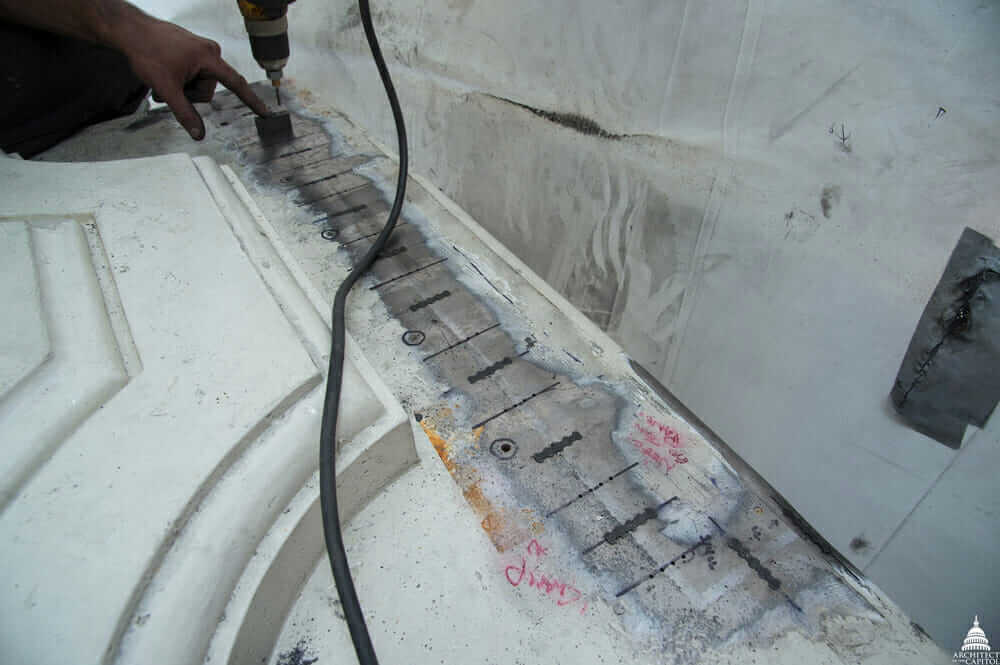 Lock-N-Stitch method used on the U.S. Capitol Dome. Courtesy Architect of the Capitol. 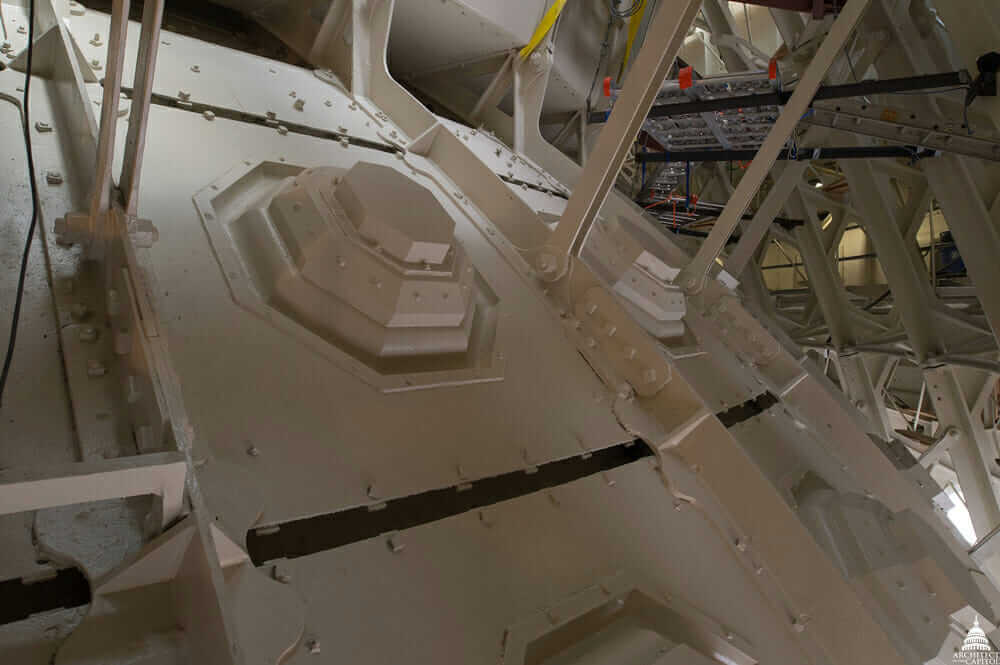 Detail of the double dome within the U.S. Capitol Dome. Courtesy Architect of the Capitol.

Detail of cracks and rust in the U.S. Capitol Dome. Courtesy Architect of the Capitol.

The Dome saw its last comprehensive restoration in 1960, which included welding together the broken and cracked cast-iron plates that had weakened the structure. According to the current US Capitol Dome project lead, Construction Manager Joe Abriatis, welding was the wrong approach to securing the century-old cast-iron parts. “We have since learned that cast iron cannot be welded, because it causes the cast iron to temper, become extremely hard and brittle, and then crack more,” he says. “Many of the welds from 1959 to 1960 have recracked, allowing water to leak into the building.”

To investigate a better, longer-lasting solution, the engineering team partnered with the National Institute of Standards and Technology (NIST) to find the most effective brazing procedures for renovation. The teams first used magnetic-particle testing to diagnose structural weaknesses of the cast iron; then, the Dome project team called in Lock-N-Stitch Inc. for the repairs.

The Lock-N-Stitch technique uses metal rods like stitches to mend cracks. And there were a lot of cracks to repair in the Dome: 8,000 inches of them, to be exact. “This is a modern process that has been successfully used for repairing large engines on ships and machinery where welding is not possible,” Abriatis says. “A series of double-hooked pins are drilled, tapped, and inserted into the length of the crack. The pins overlap 10 percent with each adjacent pin to fill and stabilize the crack and make the repair watertight.

“Next, a series of 18 holes is drilled in the cast iron to create a cavity where a ‘lock’ is pounded into the iron to give additional strength,” Abriatis continues. “The final repair is ground smooth with the adjacent cast iron and painted over. This metal stitching process allowed for the field repair of thousands of inches of cracks, which otherwise would not have been possible to perform in situ. The process takes about one labor hour to stitch 1.25 inches of metal.”

Addressing those 8,000 inches of cracks—more than 1,000 discrete fractures—these “locks” and “stitches” fortified the cast-iron plates, created tight seals, and slowed the material deterioration of the historic building.

The interior Dome, with its significant art and lighting scheme, also got a makeover. (The exterior lighting design of the Dome remains unchanged.) Conservators cleaned the artwork, including the Frieze of American History and the crown of the Rotunda, Constantino Brumidi’s Apotheosis of Washington, which depicts the first president ascending to the pale blue heavens. The conservators also monitored the interior of the Dome for any fractures that had affected it.

The colossal restoration yielded a few surprising treasures. The restoration team found the signature of a worker named Al Ports in the Rotunda plaster, as well as a clay tobacco pipe from the 1860s in the Boiler Plate Balustrade. And once the team erected the 275 tons of scaffolding (designed using Autodesk AutoCAD) in the Rotunda, a detailed paint analysis produced the original, historically correct colors of the frescoes—which were previously unknown because the photos of the early Rotunda were in black and white.

The restoration should leave the US Capitol Dome in good stead for the next 75 years. The Dome will receive regular inspections and recaulking every 12 to 18 years, but it won’t need extensive scaffolding in the near future. The US Capitol Dome is shining and secure for the next generation, thanks to an inventive technique, an eye on its storied past, and a lot of sweat equity.