The Fukushima nuclear-power accident—caused by the Great East Japan earthquake and tsunami of March 2011—set a new course for Japan’s energy policy. It was also a wake-up call for its citizens: the need was more urgent than ever to find a safer, more sustainable solution to generate power.

At the time, Atsushi Shimizu was working as an engineer at a major electronics manufacturer. The nuclear-power accident shocked him to his core, and he remembers feeling a sense of crisis not only for Japan but also for the energy infrastructure of the world. Shimizu’s answer was a breakthrough generator design: one that could transform the destructive winds of a typhoon into usable energy. This idea launched his company, Challenergy, and a prototype for a propeller-free wind turbine.

“Propeller-based turbines were invented in Europe,” Shimizu says. “While they have gotten bigger and bigger, just like dinosaurs, their basic form hasn’t changed much. And while there is enormous potential to generate electricity from wind in Japan, erratic wind patterns and destructive typhoons have really held back the spread of wind generation here. Given the circumstances, I felt there was room for innovation.”

Soon after the 2011 disaster, Shimizu began poring over literature and patents surrounding wind generation. Using this research, he proposed a novel design in which a vertical-axis generator applies the Magnus effect—a phenomenon in which a cylinder rotating in a flow of air or water experiences a pulling force perpendicular to that flow. A curveball pitch in baseball or the arc of a soccer ball during a free kick gives a sense of how this phenomenon affects spinning bodies. Shimizu conducted his first experiments at home using Styrofoam poles, with an electric fan as his wind source. And in just one month, he found the basis of his solution to Japan’s wind-generation woes. 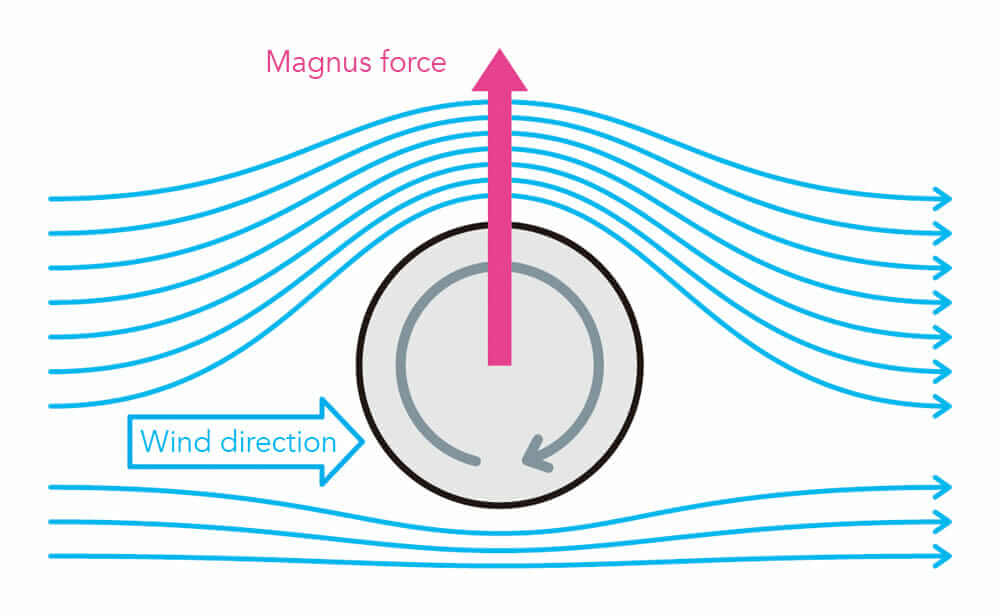 The Magnus effect works perpendicular to the wind, allowing the cylinder rotation to regulate the rotation speed, and thus the power output, of the turbine. 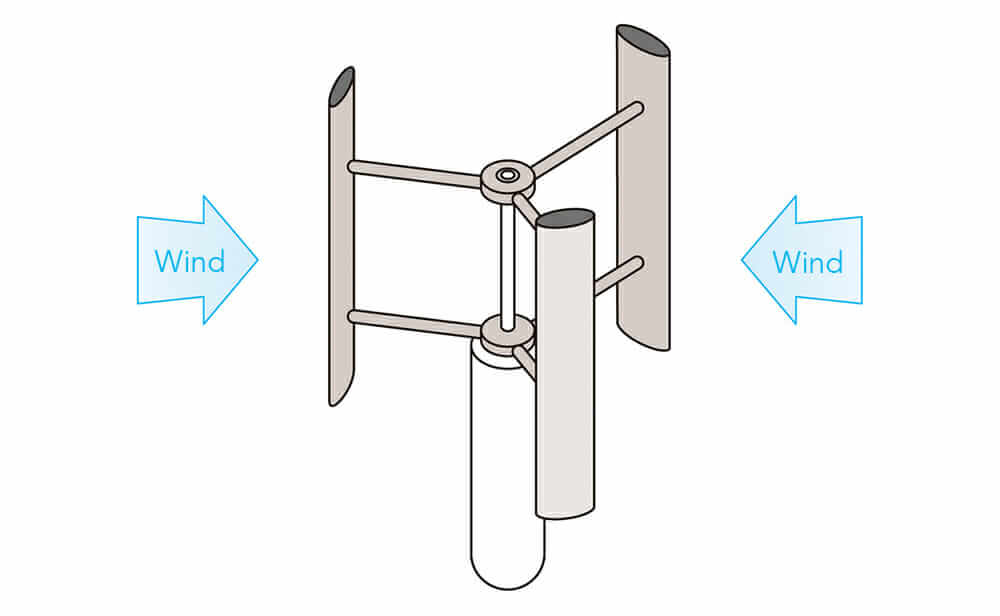 The vertical axis design eliminates the need to account for changes in wind direction and makes for a lighter-weight device.

“I wanted to address Japan’s harsh environment for wind generation, and I especially wanted to build a turbine that could withstand a typhoon,” Shimizu says. “I noted how conventional turbines would spin too fast in strong winds, causing the propellers to snap off or the motor generator to burn out. As long as the design used propellers, I knew these problems could never be wholly mitigated. Another problem was that of turbulence. Propeller-based turbines must be positioned to face the oncoming wind, but a vertical-axis design has no such limitation.”

In Shimizu’s vertical-axis design, cylinders on top of the turbine rotate to generate a Magnus effect, which then starts the rotation of the entire system. By adjusting the rate of the cylinders’ rotation, the rate of the turbine itself can be controlled, which helps prevent over-rotation in strong winds that could damage the generator.

“If the rotation of the cylinders is halted completely, the Magnus effect dissipates, which allows the turbine to be stopped at any time,” Shimizu says. “Also, cylinder rotation can be adjusted instantly in response to sudden changes in wind speed. This means a stable rate of power generation can be achieved even in typhoon conditions.”

See how other entrepreneurs are innovating.
Read More

In May 2011, Shimizu began writing his first patent, which was granted 2013. His vertical-axis turbine took first prize at the Tech Plan Grand Prix in March 2014, where he met Keiichi Hamano, president of Hamano Products Co. Intrigued by Shimizu’s work, Hamano invited him to use his company’s creative incubator workshop, Garage Sumida.

To raise the capital needed to realize a fully functional product, Shimizu “looked anywhere I could to secure funding,” he says. In addition to a crowdfunding effort, Shimizu qualified for funding by New Energy and Industrial Technology Development Organization (NEDO), a government research group that supports entrepreneurs.

Shimizu also participated in Autodesk’s Entrepreneur Impact Program and was impressed with Autodesk’s software. “Inventor is easy to use, and the added simulation functions were very helpful,” he says. “These tools allowed us to perform structural analyses and frequency-resonance studies with very high levels of precision.”

Looking Toward the Future

Through trial and error, Shimizu vastly improved the efficiency of his typhoon-proof turbine, bringing his ambitious project a step closer to achieving sufficient power generation. Production has gone forward based on testing a 1-kilowatt turbine with 3-meter diameter installed in Nanjo City, Okinawa.

“Facilities such as hospitals, schools, and evacuation shelters need at least 10 kilowatts of power,” Shimizu says. “A 10-kilowatt generator needs to be roughly three times larger, about 10 meters in diameter. Realizing this size will be very challenging. My vision is that we will be able to install these turbines on Tokyo Tower or in Olympic sites and share our inventions with the people from all over the world.”

But Shimizu ultimately has greater plans in mind. “I am thinking of placing them where typhoons hit hardest,” he says. “The Philippines, another island country that experiences many typhoons a year, like Japan, is suitable for large-scale wind-power generation. Looking toward the future, I want to harness the immense energy released by typhoons to power the electrolysis of sea water and generate hydrogen gas we could then store. I see today’s hazard maps—showing where typhoons, hurricanes, or cyclones may strike—as energy maps that could help support a storm-hydrogen-based society 10 years from now.

“Wind generation will definitely become my lifelong pursuit,” Shimizu continues. “Within the next 20 years, I hope to realize generators the size of today’s propeller-based giants, which took 100 years of progress to achieve. Some may think it foolhardy to be so ambitious, but I am sure I am up to the challenge. I am so sure, I even put the word challenge in my company’s name.”