Farther along, in pockets of reconstructed shoreline, tall grasses rustle, boathouses launch rowboats and canoes, and waterfront trails and transit corridors extend into the city’s neighborhoods. Enhanced treatment processes and the Metropolitan Water Reclamation District of Greater Chicago’s (MWRD) Tunnel and Reservoir Plan have eliminated odors and allowed fish to flourish—up to 76 species in 2016, up from just 10 in 1974, according to a MWRD’s June report. 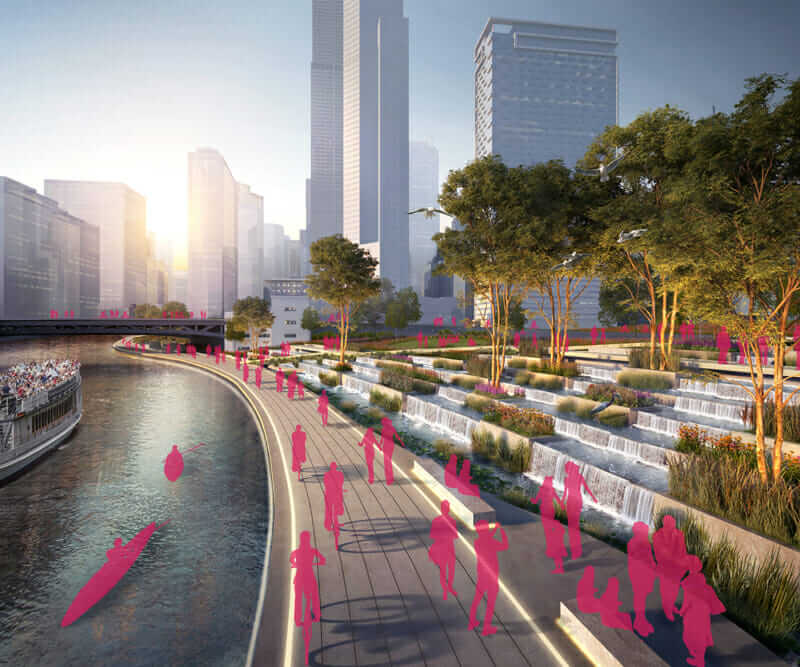 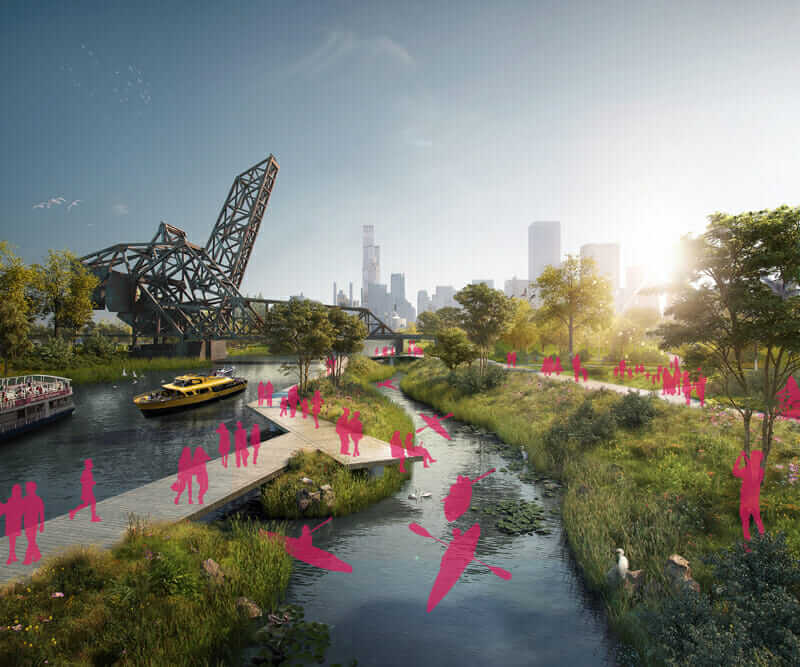 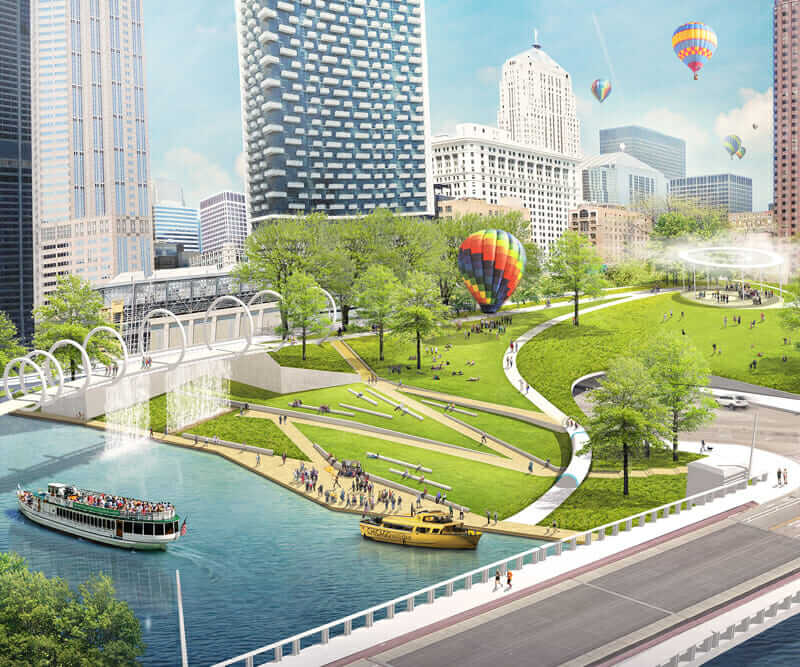 Still, there’s an opportunity to do more, says Josh Ellis, vice president of the Metropolitan Planning Council (MPC), a partner in Chicago’s River Edge Ideas Lab. “There are long stretches of the river along the North and South Branch that we haven’t figured out what to do with, large industrial areas that have historically been good for jobs, but where there isn’t much going on now. People, to their credit, are taking a look at opportunities to modernize and update these river corridors,” he says.

With funding from Comcast, the Richard H. Driehaus Foundation, and Related Midwest, the city engaged MPC to select nine leading architectural firms with experience in developing innovative riverfronts, parks, and public spaces, soliciting their visions for restoring natural habitats and activating public spaces along Chicago’s riverfront. Their designs are displayed at Expo 72, online (ChiRiverLab.com), and will travel to eight locations throughout the city.

Tom Coleman, manager of technology integration at WSP, learned of MPC’s interest in reimagining the riverfront at the American Planning Association’s 2015 National Conference in Phoenix, where he met Ellis at the Tech Zone exhibit, co-hosted by WSP and Autodesk. Ellis was impressed by Parsons Brinckerhoff’s modeling and visualization capabilities and encouraged their participation. (WSP has since acquired Parsons Brinckerhoff.)

The firms have used aspects of the model, as well as their own in-house representations, to develop designs at three characteristic locations: the historic Civic Opera House, with its flat Gothic masonry descending directly into the water; a vacant parcel near Chinatown where Ping Tom Memorial Park borders private land; and a river edge beneath a drawbridge along Congress Parkway.

Sasaki, the firm behind the Riverwalk’s recently completed sections called the Marina, the Cove, and the Jetty, chose an approach design principal Gina Ford calls “the urban sublime,” a reference to “significant, large-scale landscapes that inspire a quality of awe and beauty. We heard the mayor talk about the riverfront as the city’s national park, like the city’s Yellowstone or Grand Canyon. We thought that was such a beautiful idea. How do you bring that profound, awesome natural experience to the riverfront?” 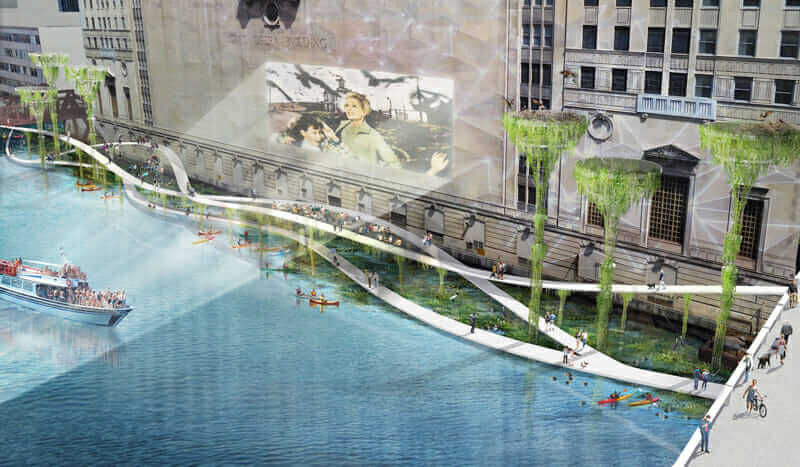 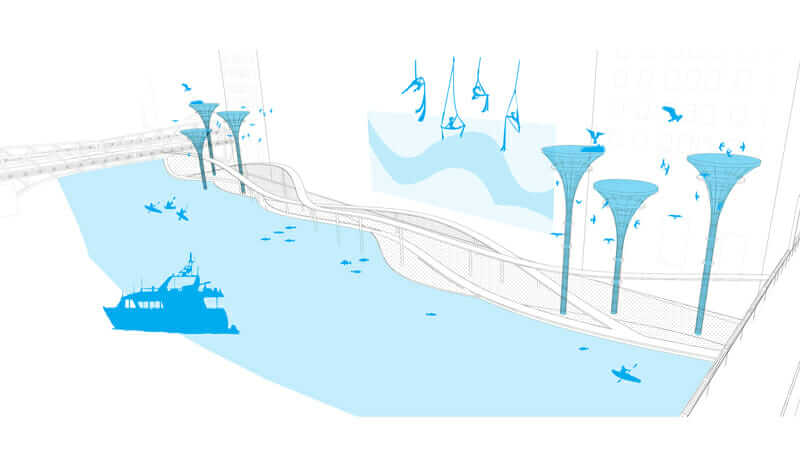 Entertainment alongside building facades makes visitors "part of the spectacle" of the riverfront. Courtesy Sasaki.

Sasaki’s answer varies from site to site, but is almost always provocative. At the Civic Opera House, a dramatic construction of taut sculptural netting connects a series of intertwined paths, letting “people climb out to lie over the river, or look up at the Opera House, where they can watch a projected film. They can be part of the spectacle of the riverfront,” Ford says. And near Ping Tom Memorial Park, a re-naturalized marshland becomes the staging ground for terraced farming and a large boardwalk deck with a floating swimming pool and market pavilion. “How cool to be able to sit in a swimming pool and be at the same level as the river and feel like you’re right there at the river’s edge,” Ford says.

SWA’s ambitious multilayered approach takes cues from the 1909 Plan of Chicago, Daniel Burnham and Edward Bennett’s vision for reclaiming Lake Michigan’s shoreline and extending the city’s park and boulevard systems. Known as Blue, the design translates historical elements of the Burnham Plan, never fully realized, to the land and infrastructure surrounding the Chicago River, embedding the visual elements with useful ecological data such as the “forest-to-area ratio,” a planning concept used by developers to offset building density with tree plantings.

“When you go to Chicago, you immediately realize the overwhelming sense of layers, above ground, below ground, this entangled complex infrastructure,” says SWA CEO and principal Gerdo Aquino. “You want to figure out, ‘Is it possible to make something healthy and ecological and green and give people access to those corridors two blocks from where they live?’”

SOM’s goal was to unite the Chicago River and the city’s park system, while using its ecological assets to bridge the city’s downtown with outer neighborhoods, says Rachel Momenee, an architect and urban designer at the firm. Beneath the Congress Parkway, for example, a series of steps leading from the roadway to the river are fed by a cascading hydrological system that aerates the water to improve its quality, while creating a pleasing acoustic effect; a barrier island near Ping Tom Memorial Park provides a dedicated kayak trail and a zone for emergent wetland ecology. “We wanted to introduce moves that improved water quality and habitat within the river, while at the same time creating spaces for Chicagoans and tourists alike to embrace and enjoy,” Momenee says.

These models will serve as an inspiration to guide public dialog as the city considers a plan to extend the Riverwalk along the North and South Branches, says Eleanor Gorski, a deputy commissioner for the Department of Planning and Development. The plan, yet to be approved, is intended to entice private residential and commercial development, open space for new pedestrian and cycling trails, and increase wetland habitat and public access to historic buildings, bridges, and statues along Chicago’s river. “We see the whole river as a second coast for the city,” Gorski says. “It’s a wonderful recreational amenity for residents who don’t live close to the lakefront.”

For New Orleans–Based Firm, Architecture Is a Tool for Design Justice