Designers, engineers, and inventors have long looked to nature for inspiration, creating innovations as diverse as airplanes (inspired by birds), ventilation systems (termites), bullet trains (kingfishers), and Velcro (burrs). Now, the natural world is serving as a model for circular cities—sustainable urban systems that minimize waste and pollution by reducing, recycling, and reusing.

Nature is the perfect model for such an endeavor. After all, it’s the OG recycler. It wastes nothing: Dead plants and animals decompose into nutrients that are consumed by the earth and then used to create a new cycle of living things. This regenerative process is at the heart of the circular economy, a system of designing, making, and using things that respects the limited resources of the planet. In a circular economy, products and processes are redesigned to eliminate waste and pollution, products and materials are reused, and natural resources are renewed. 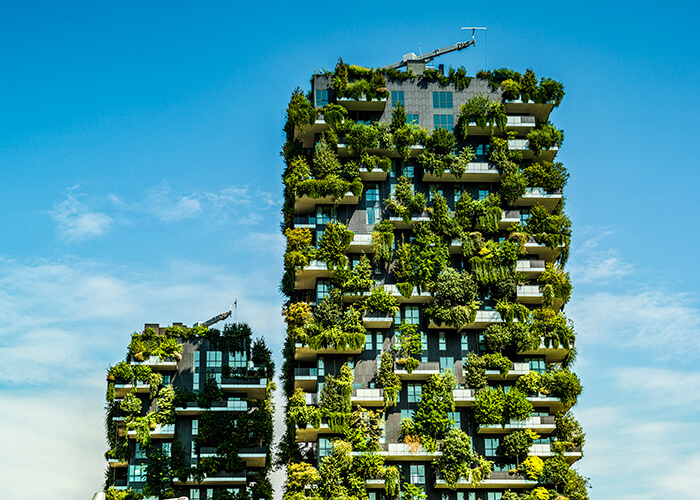 It’s a huge and necessary improvement over the current linear economy, where manufacturers take resources from the earth to make products that consumers use and then discard. According to the Ellen MacArthur Foundation, in this take-make-waste system, cities are major offenders, producing 50% of global waste and 60 to 80% of greenhouse-gas emissions. But there’s an opportunity to create change. Read more about how cities can embrace the circular economy—and learn which cities are doing inspiring work today.

1. What Do Circular Cities Look Like? For Starters, They’re Green

Green infrastructure—a planned network of natural and seminatural areas—is one method that cities can use to address waste management, stormwater management, heat stress, air quality, and biodiversity. For example, green roofs and facades can reduce waste in the construction industry by extending the life of exterior surfaces. Rooftop gardens provide a protective layer against sunlight and high temperatures, doubling the lifespan of traditional flat roofs. Likewise, green facades lower the maintenance requirements of conventional facades. The insulating effects of green roofs and facades also help regulate indoor temperatures year-round, saving energy. Another benefit of greened surfaces? They’re a heck of a lot nicer to look at than concrete. Read the article.

See Also: New Ways of Naturally Bending Wood Are All About Curve Appeal

Moving from a linear to a circular economy is no small task. It’s challenging and time-consuming, involving major changes to infrastructure, business models, logistics, and social behavior. To get started, cities must create circular systems that separate economic growth from new material use, supporting renewable resources and keeping them in the loops as long as possible. Integrating circularity into municipal policies also means getting all public- and private-sector stakeholders on board. By supporting the principles of circular economies, cities may also uncover another benefit: They might help stimulate local entrepreneurship and innovation. Read the article.

3. The Real-Estate Industry Is Going Circular, Too

When buildings are renovated or demolished, where does all that glass, steel, wood, and concrete go? To the dump, the same place where the old or out-of-style furnishings and fixtures end up. Even when new commercial buildings are constructed, leftover materials, including those that are unopened and in pristine condition, are often tossed. These practices are a huge waste of money and resources, but they’re changing as the circular economy starts to gain traction in the real-estate industry, where it promises to have a major impact on not only the environment but also on companies’ bottom line. Read the article. 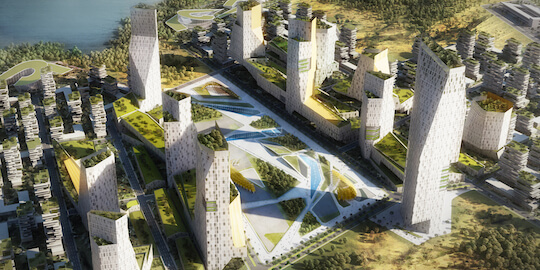 4. So, Which Cities Are Circularity Heroes?

Seven cities across the globe are leading the way in the effort to move to a circular economy. San Francisco, a long-time global leader in recycling, reuses 80% of all waste and aims to reach zero waste by next year. In Copenhagen, Denmark, 62% of residents bicycle to work every day, where they enjoy Europe’s shortest working hours and can join in on free sports activities. (Not surprisingly, the denizens of this city are among the healthiest and happiest in the world.) And Whanganui, New Zealand, boasts the world’s first body of water to be granted the legal rights of a person. The Whanganui River, which the indigenous Maori consider an ancestor, is overseen by two legally appointed environmental guardians; personhood status also helps protect the native traditions of the Maori. Read the article.

5. Putting It All Together: The City of the Future

With global population forecasted to reach 9.8 billion by 2050—and cities housing nearly 70% of that number—a host of ecological, social, and economic challenges loom large on the horizon. The architectural and urban-planning firm Skidmore, Owings & Merrill (SOM) has designed a city of the future that creatively addresses these issues. In SOM’s vision, cities are a collection of densely developed urban hubs that are linked by high-speed rail. Self-contained neighborhoods make nearly all daily services just a short walk away. City centers are located inland, far from rising bodies of water, and feature green, modular buildings that can be built with greater speed and less waste. They also boast flexible interiors that can adapt to changing business or residential needs and offer shared spaces that support community and well-being. Read the article.

New Ways of Naturally Bending Wood Are All About Curve Appeal