By noon of a typical workday, most people’s limited cognitive reserves are nearly exhausted from exposure to social media, email, and other technological stimuli—many of which were engineered using manipulative techniques to steal users’ attention. It’s almost like people are being strip mined for their most precious natural resource: their cognition.

To preserve its capability, the human brain frequently resorts to more than 200 cognitive biases. These mental shortcuts dealing with memory, beliefs, ethics, and behavior help people make faster decisions—but often in a way that’s irrational and against their best interests.

For designers and engineers, common cognitive biases can come into play during the design process, keeping creators from doing their best work. For example, when using physical tools or design software, the law of the instrument reflects people’s overdependence on their most familiar tools or presets, regardless of whether those are the most appropriate options. Under that bias, if I have a hammer, everything looks like a nail. The instrument shapes the way I think, and the hammer is the solution to everything.

A related cognitive shortcut, functional fixedness, is the bias that a tool can only solve the problem it was built to solve: a hammer is for nails and nails alone. But great designers, architects, and engineers invariably bend or break tools to make them do what they want. Virtuosos of all stripes dictate what a tool will do for them, such as Jimi Hendrix making his guitar talk. 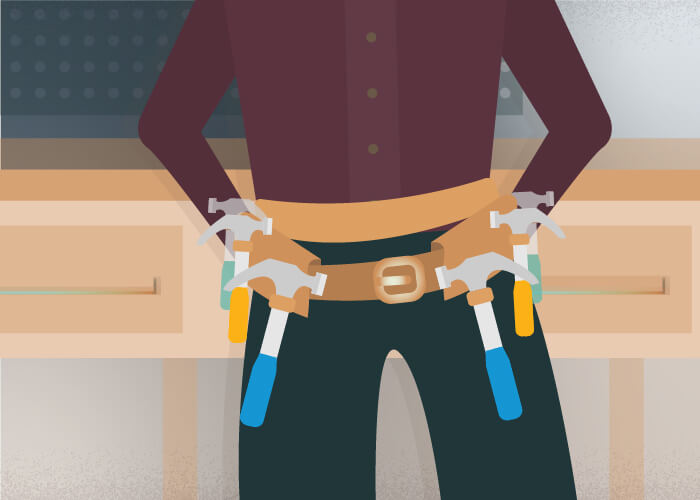 In a collaborative setting, multiple biases can amplify the impact they have on a team’s output. A typical pitfall lurks in Parkinson’s law of triviality, in which a team sidesteps its hardest challenges and instead focuses too much energy on trivial matters. This bias also goes by the name “bike-shedding”—referring to a team burdened with the complex task of designing a nuclear reactor, but rather than toiling on the reactor itself, the team spends way too much time working on the shed where technicians store their bikes.

A team’s most complex tasks may also be shrouded in the ambiguity effect, in which incomplete or confusing information leads team members to leave certain creative avenues unexplored. That may lead them to rely on the authority bias, in which the most senior person attempts to fill in the missing information and the rest of team just goes along with it—even if they have other ideas.

However, those authority figures may be victim to the rosy retrospection bias: fooling themselves into believing a successful solution from the past will apply to a present problem. Worse, the illusion of mastery bias steps in, and the experts fool themselves into thinking they know more than they really do.

What if technology was used to help people cancel biases and manage, protect, and even regenerate cognitive resources?

Sometimes cognitive biases can be positive. Many startups, in order to stay motivated, need to believe that everything will work out in the face of extraordinary odds, so they tend toward optimism bias: wishful thinking. Other times, the brain’s ability to find patterns in randomness—looking at a cloud and seeing a human head—can be amplified with creativity methods that nurture misunderstanding. For example, the Round-Robin method taught in the LUMA Institute’s workshops increases the ability to think up new ideas.

Design methods from the past 100 years—such as the LUMA Institute’s namesake Look, Understand, Make, Advance processes—are tricks learned to cancel biases or even take advantage of cognitive shortcuts to be more creative. The aforementioned Round-Robin method came from the exquisite corpse drawing process pioneered by the Dadaist and Surrealist art movements in the early 20th century.

Today, a whole segment of businesses, marketers, and user-experience designers amplify people’s biases using Dark Patterns, user-experience expert Harry Brignull’s term for nefarious manipulative techniques. One such Dark Pattern, the Roach Motel, describes a scenario where you can check in, but you can’t check out. If you’ve tried to cancel your health-club membership or Facebook account, you’ve probably been stuck in a Roach Motel.

In the online-media space, people are often not the customers. Rather, they—and their precious cognitive resources—are the product. Machine learning is scaling up dark-pattern tricks that amplify biases to effectively produce “denial of attention” and “denial of curiosity” attacks on billions of human minds. This may be one reason why productivity numbers have declined since the introduction of smartphones and other connected devices. 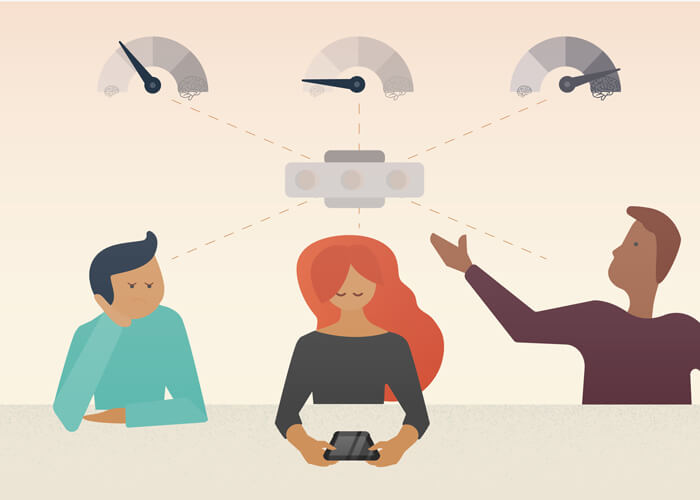 But what if, instead of amplifying biases and strip mining cognition in the interest of greed, technology was used to help people cancel biases and manage, protect, and even regenerate cognitive resources?

Consider how noise-canceling headphones use a microphone to detect outside sounds and then electronically generate opposing audio waves to cancel them out. What if a machine-learning system could detect cognitive biases as they happen in real time and mitigate their negative effects by matching the bias to a design method known to help cancel its negative impact?

Autodesk research has begun the initial exploration into such a system. For early data collection, the research team interviewed some master product designers, founders of design method institutes like LUMA, and master architects to find the common traps they see creative teams fall into—and their tricks for driving better outcomes by canceling biases in the design process and building cognitive resources over time.

One of the interviewees, the industrial designer and author Ayse Birsel, has her own design process called Deconstruction:Reconstruction (De:Re), which breaks down objects or concepts to their component parts so they can be put back together in new and innovative ways. As an example, her successful Resolve System of office furniture for Herman Miller reimagines the cubicle into something theatrical, with a backstage and a front stage.

See the system that automatically distributes assembly tasks to workers.
Download the Report

Birsel got both designers and businesspeople to think very differently about that furniture by attacking cognitive biases head-on. She has lists of things that always go wrong at the product-kickoff stage, the transition to production, and so on. And parts of her De:Re framework address those failure modes in powerful and repeatable ways.

To sketch out a prototype of its “cognitive noise-canceling framework,” the research team at Autodesk mapped all of Birsel’s De:Re tricks to the different decision biases, memory biases, and social biases that she was canceling. This map starts to suggest the basis for a machine-learning algorithm that could intervene when cognitive biases appear in a creative team’s workflow.

Now that Autodesk’s design and make tools are cloud based, it can explore ways of instrumenting the tools to sense destructive cognitive shortcuts in real time—not to detect what creative teams are designing, but how they think during the design process. There are also technologies that can detect vocal cues such as pitch, speaking rhythm, and word choice, as well as visual cues like body language and facial expressions. By recording and comparing enough of that data in design tools, meeting rooms, factories, and construction sites, the system could eventually match those cues with the right cognitive biases.

The key might be discovering how to handle the detection of cognitive biases so that not only team leaders and facilitators can intervene in the best possible way but also everyone on the team can detect biases of their own and learn to adjust them to grow their cognition.

There is no Fitbit for the mind—yet. But ideally, a system resulting from this research would go beyond recognizing cognitive biases and act as kind of a quantified-self device for metacognition: showing people the thinking behind their thinking.

The world is becoming increasingly complex and automated. For the future of work, it’s uncertain how many jobs automation will take over. But it’s a given that people will need to learn new skills and technologies constantly. There is plenty of work to do, but that work needs more attention and creativity to produce better things and a better world.

Beyond tuning and building cognitive capacity, the bigger picture for this research would perhaps evolve into a lifelong-learning API to help focus people on the next skills most likely to have high economic value. Then that system could predictively exercise and regenerate that person’s cognitive resources so they’re prepared for their next career step.

Designers and engineers are working on the next generation of everything from smart shoes to smart cities. Their future challenges will need more attention, comprehension, creativity, and ability to deal with complex decisions than ever before. For that, they’ll need technologies that cherish—not deplete—their cognition.

#Artificial Intelligence - #Cloud - #Collaboration - #Time Management
Mickey McManus is a research fellow in the Office of the CTO at Autodesk as well as principal and chairman of the board at MAYA Design, a technology design and innovation lab.