The promise of metal additive manufacturing hasn’t quite matched its initial hype. Costs are still high, and the tech remains best suited to fabricating low-volume, high-complexity parts. In short, it hasn’t been the anticipated boon to industrial manufacturing yet—so using a rocket engine to spray and bond metal particles onto existing machine parts might seem a little like overkill.

A Bay Area trio with a unique start-up idea may be changing all that. Co-founder engineers Deepak Atyam, Alex Finch, and Jesse Lang of Tri-D Dynamics have developed what they call “cold metal fusion,” which combines powder-based metallurgy with rocket science—and perhaps will open an untapped market in the process.

Tri-D Dynamics is developing a way to embed electronic sensors within metal machine parts, fortifying and protecting them from harsh environment by spraying the optimal material over them to prevent damage. Or as Finch puts it, “We can protect the electronics with a metal stronger than the metal from the part itself—getting more performance for a lower cost.” Seamlessly integrating structural hardware with the electronics required to activate them makes the parts “smart.”

They do that through what they call “augmented additive manufacturing”—building one metal on top of another and improving a machine part’s overall capabilities. Using cold metal fusion means the metal doesn’t need to be melted to be applied, so there’s no heating damage to sensitive internal components like electronics. The whole process is also much faster. Essentially, Finch and Atyam are engaging in Internet-of-Things infrastructure, embedding sensors that report back on the performance of parts in real time. Cables, sensors, and chips are protected inside conduit spaces by using the cold metal fusion of other metals to cover, situate, and protect them.

Tri-D’s machine, the TerraForma, uses heated nitrogen to project metal powder through a small rocket engine and nozzle, accelerating the powder and spraying it at supersonic speeds directly onto the substrate. It bonds immediately and without having to heat or melt it for shaping. And the process is exponentially scalable—think of augmenting container ships, skyscrapers, shipyard cranes, and more.

Humans have long built machines to work in mines choked with dust, deep below the sea with saline corrosion and freezing temperatures, and in the radiation bombardment of space. Those are the kinds of places where breakdowns and failures can be very expensive (if not dangerous) and where smart usage of equipment, informed by data, can save a lot of trouble in advance.

“If I want to drop the cost of operations, one of the biggest costs is tools breaking down and replacing them,” Finch says. “Maybe it’s only designed to operate in a certain temperature for a certain amount of time. If I don’t know the temperature of the part and its environment, I don’t really know if I’m getting close to its breaking point or not.”

Finch’s college thesis covered additively manufactured materials, and Atyam and Lang come from the aerospace-engineering world. After joining up at the University of California San Diego, Atyam and Finch were the first university team to accomplish the “impossible” task of a 3D-printed rocket engine test and flight. They got a lot of attention from the aerospace community when they succeeded.

Finch and Atyam then waded into the world of start-up capital, business plans, and market intelligence. The intended aerospace market didn’t pan out, but they soon realized the potential of augmented additive manufacturing: rocket engines building things on other things by spraying powdered metal at high velocity.

Tri-D is now part of the residency program at the Autodesk Technology Center in San Francisco, where Atyam (CEO), Finch (president), and Lang (VP of operations) have had the opportunity to rapidly iterate and collect the data needed to build the best possible machines. 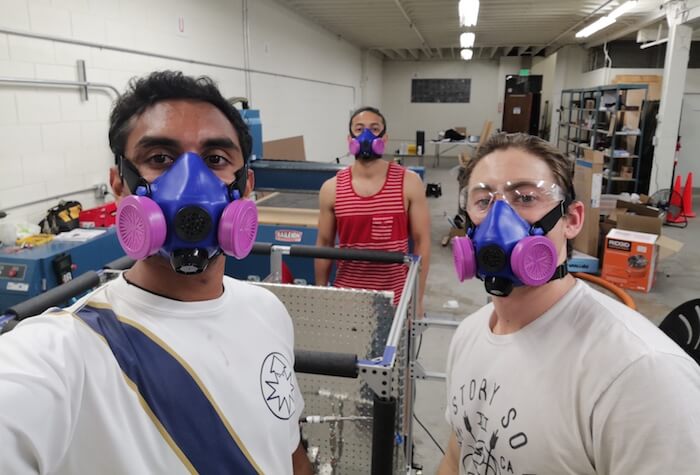 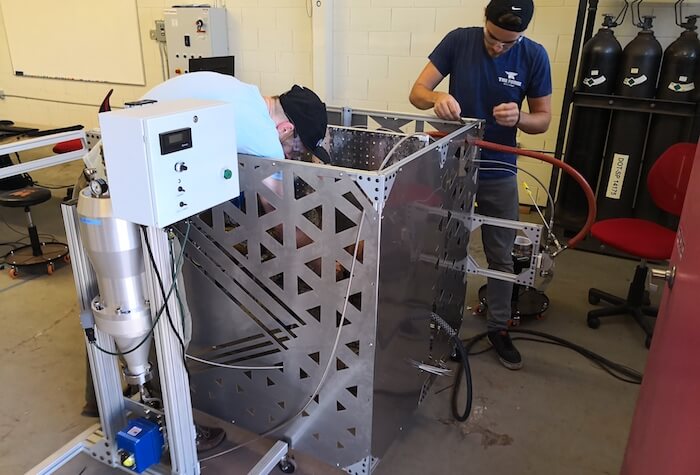 Gas from a tank goes into the TerraForma, where it is heated in order to force powdered metals through the nozzle. Courtesy of Tri-D Dynamics. 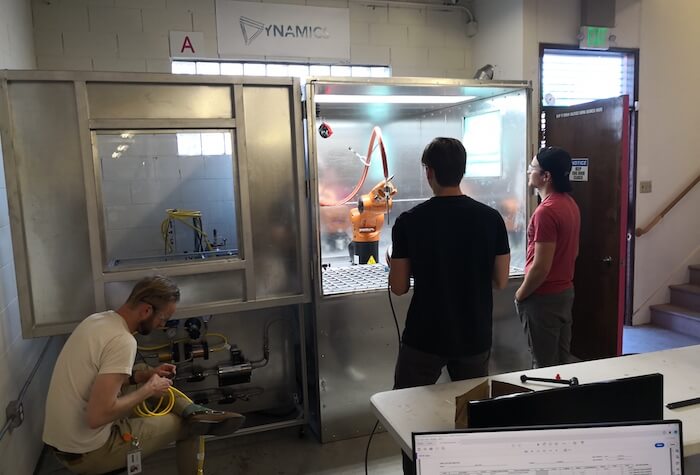 Powdered metals are prohibited at the Autodesk Technology Center in San Francisco, so Tri-D moved to a facility in nearby San Mateo, CA, where the company had more room to work. Courtesy of Tri-D Dynamics. 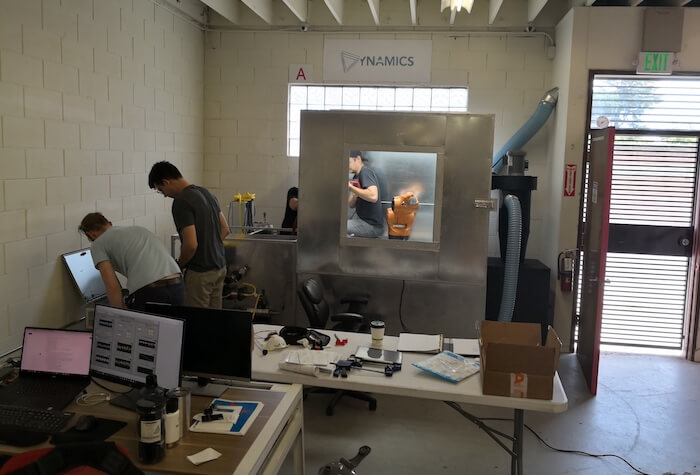 Tri-D’s technology stands out in part because the metal does not have to be heated to the melting point to adhere to a surface. Courtesy of Tri-D Dynamics. 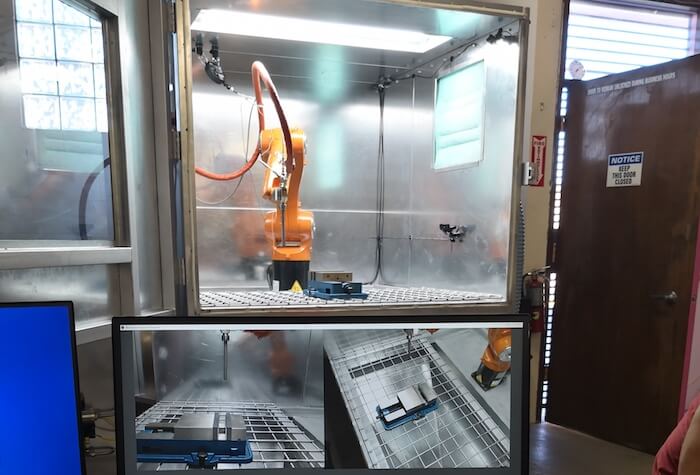 The finished TerraForma is ready to spray. Courtesy of Tri-D Dynamics.

“We’re looking at integrating sensing capabilities—your nerves, the ability to touch and feel and respond—into mechanical systems,” Atyam says. “How do you know what your robot or part is feeling? How do you know what your drill bit is feeling? If you can have the nervous system of each of these sensors tell a brain what’s going on, you can adapt to the proper conditions.” He goes as far as calling this principle “living metals.”

It starts with tanks of a gas (currently nitrogen) and a supply of metal powder. They’re fed into the relevant chambers of TerraForma, where the gas is heated, forcing the powdered particles through an aperture at high speed.

“You don’t need to get it to melting temperature like in a lot of additive and general metal-fabrication technologies,” Atyam says. “What you do is shoot the powder out at such a high speed that it deforms, flattening like a pancake and adhering to the substrate. It’s the ductility and elasticity of metal particles rather than their melting point that counts.” 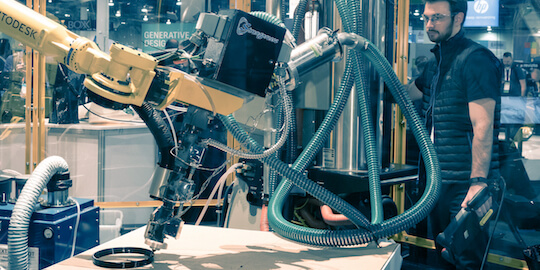 Working with harder metals requires increasing the spray velocity to achieve the pancaking effect. Higher gas temperature—for higher pressure and a faster spray—is the only real cost variation. Each layer of sprayed material presses down and compacts the layer beneath, resulting in a very dense, strong material.

It’s scalable downward, as well, theoretically usable in a handheld mechanism. Similar in use to electroplating, only much faster, there are no toxic by-products or extreme temperatures. With negligible cooling, it’s ready instantly, without the defects from heating and cooling that have plagued manufactured metals for hundreds of years.

With more funding, Atyam thinks the workability (and price) can come down. Currently, the gas is delivered in tanks from a commercial supplier—a cost that could be ameliorated with attached gas delivery in the system. The Tri-D team also moved to nitrogen from previous iterations that used helium, reducing costs to as little as a tenth of what they were. “Costs are driven by the material,” Atyam says. “Harder metals like carbides are more expensive because you have to shoot them faster and use more gas and heat to do so.”

The Sky’s the Limit

So what’s the future of rocket-aided additive manufacturing? Will Tri-D Dynamics provide parts across industries?

“We embed sensors in metal to protect them, which is best for industries that operate in harsh environments,” Atyam says. “That’s a starting point. From there, we want to make better sensors that are more suited to the process. We’d make parts that actually come with the full sensory network in them and provide the ability to control them.”

Tri-D’s three co-founders are also big proponents of smart cities, and as sensors in everything—roads, buildings, cars, trains—create vast new data sets, standing on the bleeding edge of smart technology will be crucial.

Building sensors and data technology into hard metal parts grew from a need Tri-D Dynamics tapped into organically; customers and research drove the technology. “We’re trying to get real-time, critical data from the infrastructure back to the operators,” Atyam says. “That’s the idea of optimizing huge systems and reducing the wasted time, money, and environmental resources if they aren’t.”

And with huge energy production, aviation, and city systems all needing optimization to cut costs, save time, and create a smaller environmental footprint, there’s no better time to shape the future by spraying metal particles through a rocket.