“We had this hypothesis that we can make really crazy, complex structures if we create a better software workflow to the design environment,” says Evan Atherton, senior research scientist, Autodesk Research Robotics Lab. That theory came to life in the form of the Arroyo Bridge, a geometrically complicated steel pedestrian bridge that stretches 70 feet long and features more than 500 discrete parts. A joint venture of the University of Southern California and Autodesk, the Arroyo Bridge Project is a successful collaboration of human and machine—in this case, master welders and a massive robotic arm. It’s proof that collaborative robotics can be an effective way to marry human craft with robotic precision. Watch the video to learn more.

R. Scott Mitchell, Project Designer, Director of Fabrication, Associate Professor, USC: It has a tremendous complexity to it. There are no two parts that are the same. It has over 500 discrete parts, and there’s not a right angle in that thing.

David C. Martin, FAIA, Architect of Record: The brief for the class was to design a pedestrian bridge. It was a very interesting project because it was a 70-foot span. The students evolved, I think, four succinctly different, very fascinating concepts. And we made a selection of the one that was the most interesting to us.

Adan Macias, Job Captain, USC Architecture Graduate: As a student you never think, “This project is going to be built.” We’re always taught to think, “Potentially, this project can be built; how would you build it? Take into consideration all the site context and whatnot.” But I think for the bridge, it was a little bit different in a sense because David had that mentality where he was like, “We’re going to build this thing.” And it motivated us, in a sense, to push hard during the design phase.

Alex Weisfeld, Computational Designer, USC Architecture Graduate: So the Arroyo Bridge is about designing completely digitally, getting through the entire fabrication process with one trade, one team. And that’s something that’s not typical to the AEC [architecture, engineering, and construction] industry.

Mitchell: It was pure structure. It was something the students don’t often get. They were working on something that was just so purely structural and working with the aesthetics of structure, as well. The geometric aspect of it was very complicated, but it made it more free. It really was eye-catching. People really responded to it at the time. 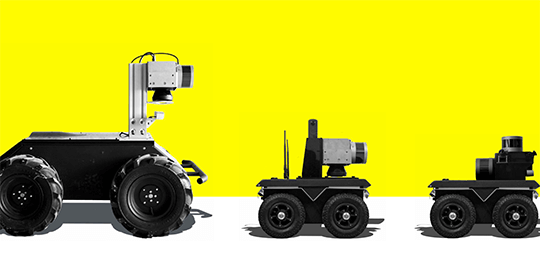 Martin: The traditional way to do this would have been labor-intensive, for sure. But along the way, with the tools available to us, we said we were going to prefabricate it; we were going to prepaint it; we were going to have the minimal construction site on the side so it just clicks together. We didn’t have the inkling of the complexity until we really started doing the engineering. Scott dove into it. He came to us, and he said, “What we really ought to do is use the robots.”

Mitchell: We had to work with people that were master welders, and it was really a critical part of the process. And how I first approached Autodesk was: “I want to build something. I want to do collaborative robotics. I want to keep very traditional master welders in this process.” But I also wanted to basically take a lot of cost load off of it, free them up. So introducing new technologies in increments to shops—I want robots in a shop like this; I want a robot in the corner that they can haul out when they need to do very specific geometries. [I want] to create a workflow that a shop like this can just have a robot in the corner and pull it out when they need it.

Heather Kerrick, Principal Research Scientist, Autodesk Research Robotics Lab: I was really excited when I first saw the bridge design, because it really gave the opportunity for us to explore a number of themes that we have been researching in the lab. But instead of being in a lab environment, we got to actually put them out in the real world.

Evan Atherton, Senior Research Scientist, Autodesk Research Robotics Lab: So the research in our lab has been trying to look at … we have all these really complex designs that historically we haven’t been able to make. Can we look to some existing technologies and create some software workflows to help bridge that gap between the digital complexity and the physical manufacturing technique?

Weisfeld: Collaborative robotics is when a human can actually interact with the same workflow that a robot is doing. In our instance, we have a robot doing, literally, the heavy lifting and the precise positioning. And then humans can come in and do the more nimble, precise things, like welding along a complex curve. While that’s something you technically could robotically program, it is far simpler and far faster, at this point, for humans to take care of that.

Kerrick: Any sort of automated system is often really brittle. As soon as anything is out of whack or unexpected, the entire system can break down. What the industry has often done to respond to that is try to reduce any source of chaos—so sort of Six Sigma, trying to make everything as perfect and precise as humanly possible. And what this project does instead is it allows for that chaos and then leans on humans to help adapt and take that chaos in stride.

Macias: Once you get familiar with the robot, I think it’s very easy to control it and be able to do whatever it is you want to produce.

Martin: When Autodesk got involved, we started saying: “Oh, my gosh. They see something in here that we only have imagined.” And that is that the computer would be used hand-in-hand with craft to create projects in the future.

Atherton: I think by making it easier for designers and artists and architects to use tools like robots, we’re going to be seeing an explosion of the different types of things that we might see in the real world. These are people who view the world differently in many ways, so they’re going to be able to instantiate some of those ideas physically in a way they haven’t been able to before.

Weisfeld: A lot of people can look at this project and say, “Well, they made it with robots.” Sure. But what I think people should be wondering is, “How do they make it with robots?”

Mitchell: I think this project is proving that there is a very practical outfit for robots at this scale. And a lot of companies use them for milling and different form work, whereas we are using them to create something incredibly precise at a lower cost point.

Atherton: For us, when we entered this project, one of the reasons we wanted to explore it was we had this hypothesis that we can make really crazy, complex structures if we create a better software workflow to the design environment. And I think that we achieved that.