Musing on the spiritual and formal predilections of the building materials he used so masterfully, architect Louis Kahn once famously said: “You say to brick, ‘What do you want, brick?’ And brick says to you, ‘I like an arch.’ And you say to brick, ‘Look, I want one, too, but arches are expensive, and I can use a concrete lintel.’”

The Stereoform Slab pavilion, designed and fabricated for the 2019 Chicago Architecture Biennial, is a meditation on the ideal forms of a different material: concrete. The spirit of the installation directly addresses Kahn’s concession to material efficacy, combining arches with sculpted concrete while also demonstrating a more sustainable approach to using the material.

Often, concrete forms specifically showcase the expressive range of this modernity-defining material. The methods used for the Stereoform Slab also show how standard structural systems can be enhanced with subtle, beautiful waves of digitally fabricated concrete. For such a ubiquitous building material, finding new ways to realize these designs with better CO2 embodiment could have significant reach.

Designed by architecture megafirm SOM (with some funding and design collaboration from Autodesk), the pavilion uses ancient engineering principles to support its weight and a relatively new mold-fabrication technique deployed at unheard of scales—all in the service of greater material strength and efficiency.

To begin the construction process, Odico Construction Robotics in Denmark created a mold for the alternately rectilinear and sinuous concrete forms. The mold was cut into shape by a 7-axis, robotic abrasive wire-cutting arm, which sliced and formed it like a giant lathe. (The mold is made of expanded polystyrene, a close cousin to Styrofoam that’s stronger and denser.) Working from CAD drawings, this diamond-tipped, articulated bandsaw runs on custom digital-fabrication software, cutting through mirrored forms that play to concrete’s strengths and cover up its weaknesses.

From the outset, the final form was determined by the design process. “The built form, at the end of the day, is a physical manifestation of what the force flow is,” says Benton Johnson, SOM’s structural director. To shore up a concrete lintel or high-rise floor slab (as the pavilion approximates), the ideal way to add strength is to place an arch at the furthest point between two columns.

“But the problem with that is that an arch doesn’t make a very good floor,” Johnson says. So the Stereoform Slab flips the arch upside-down, making it a catenary curve that still holds the slab together where tension is greatest. “We’ve flipped tension and compression,” says Kyle Vansice, a senior architect at SOM. “Concrete wants to behave in a purely compressive fashion.” As the slab runs toward each column, it thickens and then tapers where the forces of compression are greatest.

And while the roof of the pavilion is a pure rectilinear slab (resembling a high-rise floor plate), there’s subtle poetry to how it’s supported. Waves of concrete flow out from the slab and coalesce at its square columns, like part of an inverted, exactingly symmetrical skate park. The pavilion’s mold, shipped to Chicago from Denmark so it could be cast in place, is on-site in Chicago’s West Loop neighborhood.

“The big advantage of this technology over a conventional CNC mill is speed because you’re not trying to remove material layer by layer, pulverizing material incrementally,” says Scott Duncan, a design partner at SOM. “You just make the cut straight through, and you’re done.”

Søndergaard likens traditional CNC fabrication to “emptying a bathtub with a teaspoon.” The abrasive wire-cutting method is more than 100 times faster, and each mold section was formed using four slices or fewer. 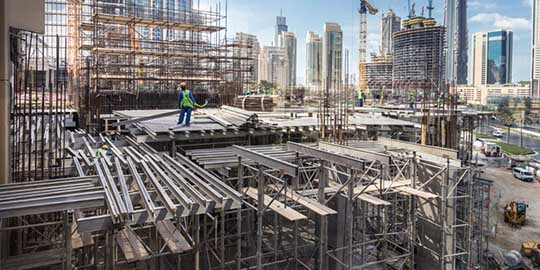 By fine-tuning exactly how much material needs to be used for a given span, the process uses 20% less material than a conventional system, which can reduce the carbon footprint of a structural system by 20%, as well. The formation of concrete slabs makes up 40%–60% of a building’s total carbon impact, so efficiencies gained in this part of the construction process have an outsize impact. Minimizing material waste and fabrication time for intricate concrete formwork also introduces significant cost savings.

“When you have nonstandard concrete—anything that is not a straight wall, anything out of the ordinary—then framework is really the dominant cost factor,” Søndergaard says.

The robotic wire-cutting technique that Odico specializes in has been around for about six years, but the large scale of the Stereoform Slab (at 70 feet long) was among the project’s biggest challenges. “The issue that we deal with is not usually technology; it’s scaling technology,” Vansice says. Fabricating the 8-foot-wide mold (wider than any mold Odico had made before) entailed custom-building a nearly 80-foot-long cutting station, the largest application of this kind of formwork manufacture that Odico had ever heard of.

SOM and Odico’s vision for this fabrication method is that it will be a holistic and potentially mobile building system that can create taller buildings and wider spans with less energy and material. The robotic lathe arm could be packed in a shipping container and sent to a building site, creating a “factory on the fly.”

Mold sections can be pieced together in a modular fashion for easy transportation. Even if the molds aren’t made on-site, in a high-rise structural system, the relatively light molds would move from floor to floor, ascending higher with each concrete pour. “They could be sized to fit in an elevator,” Duncan says.

The most prosaic element of this process is the aspect that could be the most disruptive to the construction industry: These digitally fabricated molds work with regular concrete and don’t require any nonstandard materials. And, once the concrete is poured, no specialized labor is required, which should encourage more widespread adoption across the industry. “You really need to transcend material-science innovation,” Søndergaard says. “You need to create something that is really compatible with how we do concrete today.”

“You can imagine casting optimal forms in almost any part of the world,” Vansice says. Optimal, but also expressive. Concrete’s formal horizons have been adapted to myriad cultures, regions, and traditions—all of which can adeptly combine form and function with a few swipes of the lathe.