Each year, more than 4 million people visit the National Gallery of Art in Washington, D.C. Seven days a week, they descend on its galleries to follow the advice of Pablo Picasso, who once said: “The purpose of art is washing the dust of daily life off our souls.” Here, amid the works of da Vinci, Rembrandt, Monet, and van Gogh, their souls can take one heck of a bath.

In the museum’s newly expanded East Building, which reopened in September 2016 after three years of closed-door renovations, visitors can take in 500 different works of contemporary art by the likes of Alexander Calder, Mark Rothko, Henri Matisse, and Georgia O’Keeffe. If they look closely, however, they’ll notice that the space itself is a masterpiece in its own right.

The hidden key to the design’s success—invisible to those who come to enjoy great works of art—was a detailer-fabricator collaboration that started with the architect’s concept and was realized by the detailers and fabricators who put it all together.

Opened in 1978, the building’s original footprint was designed by architect I.M. Pei, whose challenge was to conceive a grand building for an awkward, trapezoidal site on the National Mall. Pei’s solution: He drew a diagonal line across the trapezoid, dividing it into two triangle-shaped wings: the first, a large isosceles triangle, would be devoted to public galleries; the second, a smaller right triangle, would contain offices, a library, and a study center.

Designed in part by former Pei associate Perry Chin (who served as concept architect and adviser, alongside architects of record Hartman-Cox), the East Building’s renovation perpetuates Pei’s love affair with triangles. Nowhere is that more evident than in the building’s northeast tower, where a striking new diagonal staircase connects the basement to the galleries above it, culminating in a new rooftop sculpture garden. Cantilevered from the wall, the staircase ascends in such a way that looking down from the top reveals an echoing rhombus—two isosceles triangles placed end-to-end in loving tribute to Pei.

It’s beautiful. For the crews that fabricated it, however, it was beastly. “It was probably the most unusual stair I’d ever seen,” says Joseph Milani, president of Crescent Iron Works, the Philadelphia-based company that fabricated the staircase. “The architects didn’t want to see welded joints; they wanted the stair to look like it was carved out of a block of metal.”

Then there was the complex geometry. “What is most unusual about the stair is the fact that it has a diamond shape,” Milani says. “With most stairs, there’s a level landing where they change direction. We didn’t have that. This stair changes directions midflight. To achieve that geometry, we had to machine and bevel the edges of the plate stringers to form a V-joint at the midpoint. That was really difficult to do.” 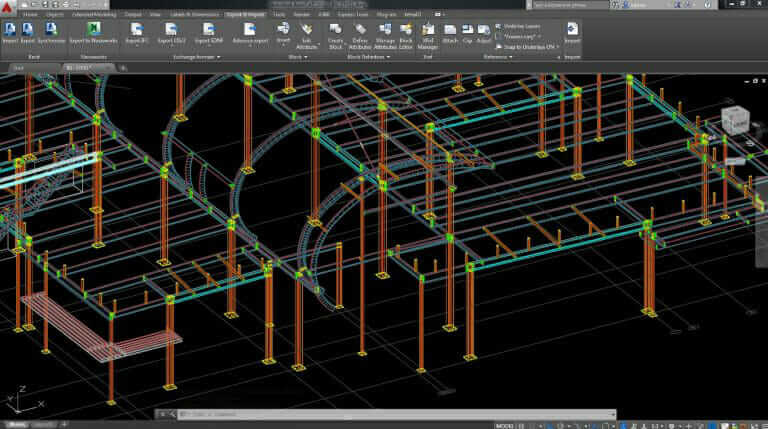 That Crescent Iron Works executed the ambitious design is a testament to the dedication of its crew, as well as to the quality of its detailer: J.B. Long Inc. of Fleetwood, Pennsylvania, which detailed the staircase using Autodesk’s Advance Steel detailing software.

“The job of a detailer is to take the design documents from the architect and the engineer and interpret those for the fabricator,” says J.B. Long owner Jim Long. “Architects generally don’t finish their drawings, so it’s our job to ferret out the information that’s missing and present those drawings in a way that helps our customer build what’s there.”

“A fabricator has to truly appreciate the role a good detailer plays. There’s a catchphrase I like to use: Cheap detailing ain’t cheap.”—Jim Long

Without a good steel detailer, projects can bleed both time and money. “If you do the steel detailing incorrectly, the guy in the fabricator’s shop may not know; he just starts building,” Long says. “You won’t find out until you start hanging it that it doesn’t fit or that it doesn’t match the architect’s design intent.”

That can be a big—and expensive—problem to fix. Avoiding it takes more than a talented detailer and fabricator; it also requires a healthy relationship between the two. According to Long and Milani, three main ingredients create a successful partnership, the first of which is respect.

“A fabricator has to truly appreciate the role a good detailer plays,” Long says. “There’s a catchphrase I like to use: Cheap detailing ain’t cheap. The fabricators we get along with are those who understand that spending money on a good detailer now will save them a lot more later by avoiding fabrication errors and erection issues.”

The best way for fabricators to show that respect is to give detailers the trust and autonomy they need to do their job. “The worst thing for me is when a fabricator feels the need to interfere with every little thing I do—especially when it comes to communication with the architect and engineer,” Long says. “I need to be able to directly ask the design professionals questions about their drawings and get the answers I need in the way that I need them. I prefer that the fabricator let me take the lead role in doing that.”

And from the fabricator’s point of view, trust must be earned, which leads to the second ingredient in a successful detailer-fabricator collaboration: experience.

“We need somebody who actually understands the work,” Milani says. “We don’t want a detailer who just regurgitates what the design professionals put out, because most of what they put out is just a concept. We need people who can find all the problems up front before it gets to the shop and out into the field.”

Knowing the software is not the same as knowing the work, Milani stresses: “To me, that’s what separates J.B. Long on a project like the National Gallery job.  They have detailers who could probably draw on paper if they had to. A lot of them probably did draw on paper at one time. They understand what’s in the drawings; they’re not just pushing buttons in a program.”

As for the final piece in the detailer-fabricator puzzle, it may seem obvious, but it’s really all about communication. “I keep track of all my requests for information—the questions I ask the design professionals, when I ask them, and when I need answers—and I communicate that with my fabricator,” Long says. “That way, if I’m not getting the answers I need from the architect and engineer, they can step in.”

Although it’s not always necessary, physical proximity can help. “J.B. Long is relatively local to us, so if we needed to get together with them to look at something, that was an option,” Milani says. “A lot of the big detailing firms do their detailing overseas. That can make it tough to coordinate things, so a lot of the firms we’ve been using lately at least have an office in this country with project managers who can communicate with us easily.”

Although detailing and fabricating are a science, uniting them clearly is an art—just like the spectacular staircase their union produced.