In 2011, a 6.3-magnitude earthquake struck Christchurch, a city on the east coast of New Zealand’s South Island. The quake caused considerable destruction, and the Christ Church Cathedral suffered major damage to its facade, western porch, and adjacent walls. Its 118-foot tower and 88-foot spire also collapsed.

It took 40 years to build the Christ Church Cathedral; the cornerstone was laid in 1864 and construction completed in 1904. The building has served as a historic place of heritage, a sacred place of worship, and a civic place of gathering. With its demise, the cathedral signified a broken city. 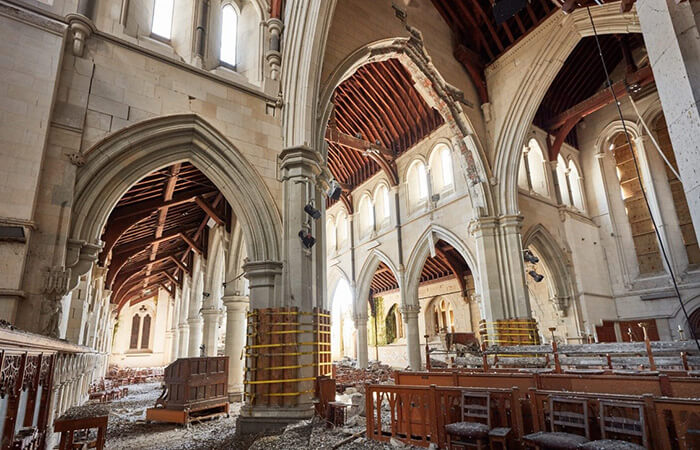 The cathedral’s damaged nave. Courtesy of Warren and Mahoney. 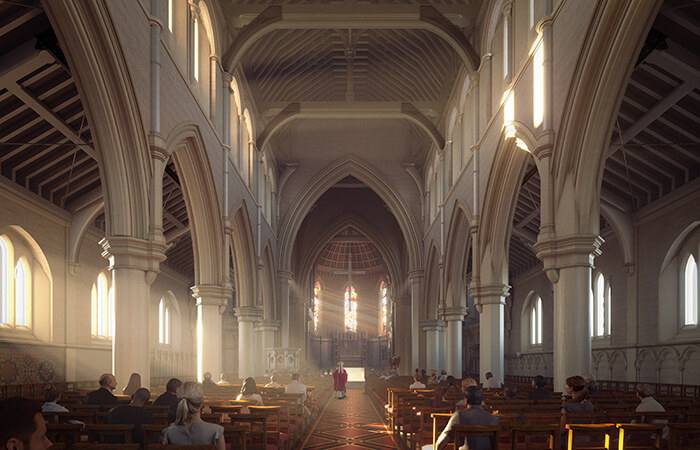 A rendering of the restored nave. Courtesy of Warren and Mahoney.

The project’s estimated cost is $154.3 million, with work being done in five phases:

Stabilization began in 2020 and will take up to two years; the entire project is expected to take between seven and 10 years, finishing by 2027 at the earliest.

Pacific Rim architectural practice Warren and Mahoney, in collaboration with Snøhetta, is leading the design for Christ Church Cathedral’s reinstatement. A key discussion early on was how to approach modeling the building. The team had two paths: One was to model the cathedral in its current state, block-by-block, as accurately as possible; the other was to model the building orthogonally, using photogrammetry and point-cloud scans to understand the movement that occurred. The project team chose the second path.

“It’s the most efficient route we could have taken, and it utilizes technology in its best forms,” says Brad Sara, the project’s BIM (Building Information Modeling) manager. “Point-cloud scans are becoming better, along with the programs to read and understand them. We needed to consider where we thought technology was going to change in the most helpful way.”

The firm wanted its designs to have an impact worthy of the Christ Church Cathedral, which transcends being just a building. “It’s more than just a symbol of the Church’s position within Christchurch,” says Peter Marshall, project principal. “A reinstated cathedral will be a significant milestone in the rebuilding of the city.”

A Single Source of Truth to Rebuild Christ Church Cathedral

In October 2020, the firm released the concept design, offering the public its first glimpse into the city’s future civic and heritage centerpiece. The design was based on a single digital model created using Autodesk Revit and pieced together from a range of sources: the original architects’ drawings, early photographs, panoramic pictures taken inside the cathedral, a catalog of every stone fragment that fell off and has been stored off-site, and point clouds, among others.

Warren and Mahoney tapped its expertise in managing multiple inputs to create a digital replica. “We had to choose which piece of data—be it a drawing or photo, right up to the most recent point-cloud scan—to use for various areas of the building and determine which areas we still have no information for,” Sara says. “There’s no single source of truth, and we’ve had to bring that together in a model from multiple sources of truth.”

This digital model enabled more efficient collaboration. Using Autodesk BIM 360, Warren and Mahoney worked in the same model environment as the engineering team at Holmes Consulting to define the structural and architectural elements of the building and figure out how they go together.

“Usually in a design, the architect would own the floors up to a certain point, then hand it over to the structural engineer,” Sara says. “But in this project, we had to divide the individual parts of the walls between architect and structural engineer. We couldn’t have done that without the shared model.”

Going beyond structure, Warren and Mahoney used its single digital model to work with specialist conservation experts to understand the building’s many heritage features. On-site contractors are currently using the model in the stabilization work that’s underway. 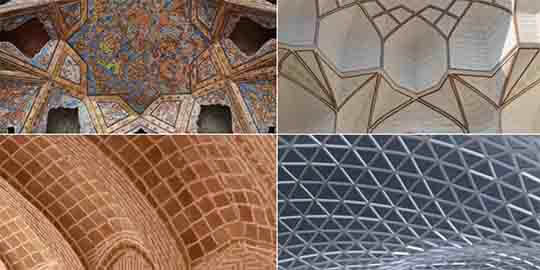 The firm created a virtual reality (VR) model to update and engage the client. “With the cathedral being severely damaged, no one’s been able to enter the building for the past years,” says Nic McEntyre, an associate and senior technician at Warren and Mahoney. “It’s a great way to show what the new space will feel like.” VR is a key tool in developing the design, helping the team explain the complex parts of the reinstatement to CCRL and make critical design decisions.

One of Christ Church Cathedral’s most defining features is its ornate, stained-glass rose window. Modeling the window’s complex geometry involved examining each piece and how it was crafted—exploring the pieces first in 2D, then in 3D.

“My thought process was trying to understand—in sketch form—how the window was made, what the sweeps and profiles were, and how they go together, trying to identify the repetitive elements so we could model it efficiently,” McEntyre says. “You start to get an intimate knowledge of every piece when you’re tracing the profiles from the point cloud.”

Contending with old and new will be more evident once the cathedral reaches its strengthening and reinstatement phase. Stonemasons shaped many of Christ Church Cathedral’s original stone elements; carpenters built its timber structures. The same process is envisioned for the reinstatement but may require melding traditional craftsmanship with new technologies, such as 3D printing for certain structures.

Warren and Mahoney saw this mix of classic and contemporary techniques as an opportunity to explore how the carpenters, stonemasons, and other skilled workers will interact with the drawings and models. “The current thinking is to try and reinstate it in stone as faithfully as we can, but discussions are ongoing with stone suppliers and stonemasons on how we can use new technology,” McEntyre says.

From Ruin to Regeneration Through Digital Collaboration

Warren and Mahoney has a civic and cultural responsibility in designing the Christ Church Cathedral’s reinstatement. The firm will have to do justice to the building and its significance to the city of Christchurch: Even in its worst state of disrepair, the cathedral was still a symbol of hope and strength.

But these efforts will hopefully pay off, as the cathedral’s restoration will herald the comeback of Christchurch’s preeminent icon and signal the return of the city’s spiritual heart and civic nexus.

“I have fond memories of performing in the cathedral as a schoolboy singing in choirs,” Sara says. “To be able to see people going into the cathedral again and experiencing it will be a defining moment of bringing people back together in Christchurch.”