In Volterra, Italy, overlooking the Pignano limestone steps of one of the most well-preserved Roman theaters in the country, Richard Celender watched in awe as a 3D Robotics–made solo drone soared quietly overhead. Before his eyes, history was being remade.

Celender is an FAA-licensed remote pilot and vice president of the Pittsburgh-based Civil & Environmental Consultants (CEC). As part of an international reality-capture workshop from October 10–22, CEC—along with Volterra Detroit Foundation, Case Technologies, Autodesk, and 3D Robotics—collaborated on an unprecedented mission: Using drones, cameras, and laser scanners to produce textured, 3D mesh models and animated videos of the ancient Italian city, its archaeological remains, and some of its treasured artwork. 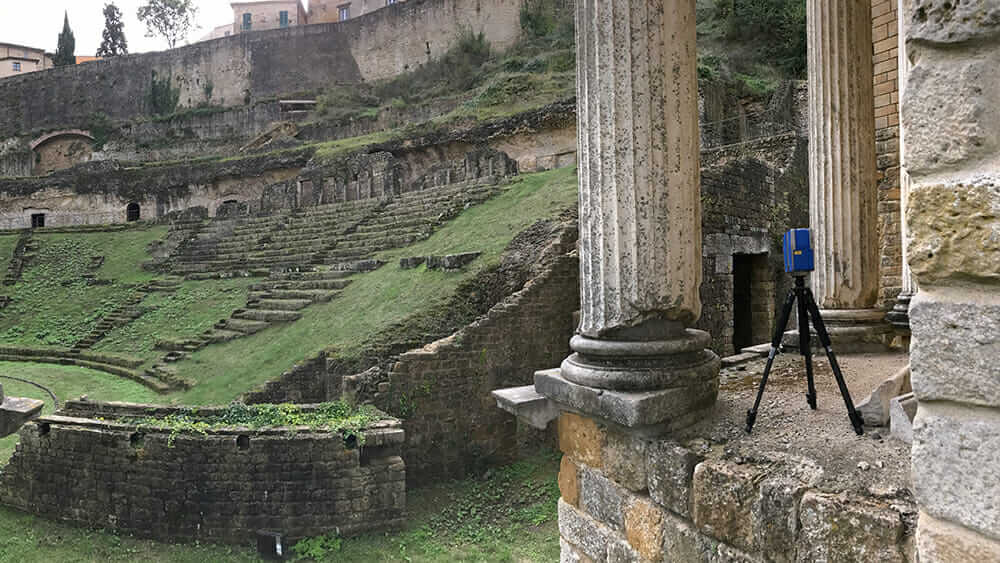 A close-up of the ancient Roman Theatre in Volterra, Italy. Courtesy Rob Sinclair, Civil & Environmental Consultants, and the Volterra-Detroit Foundation. 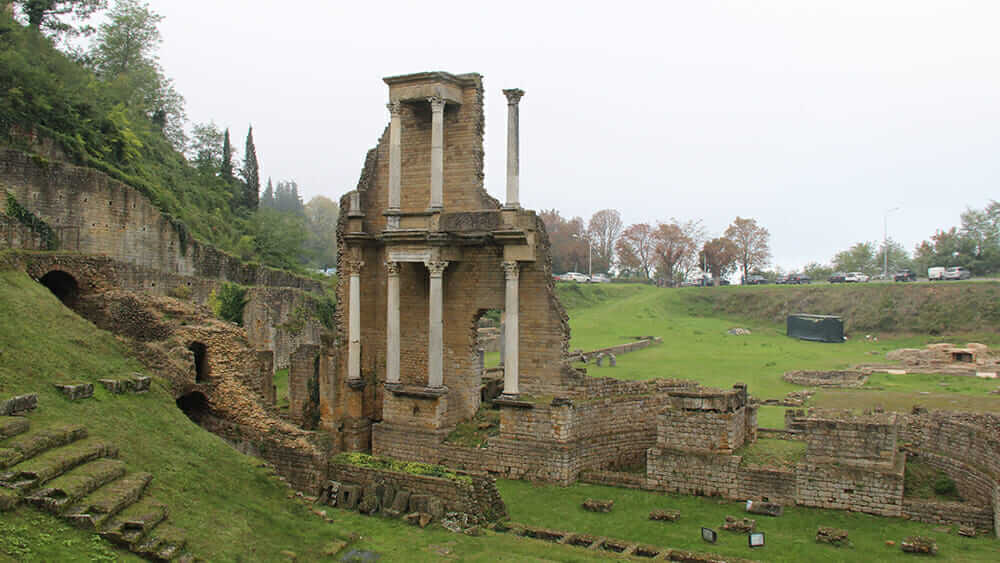 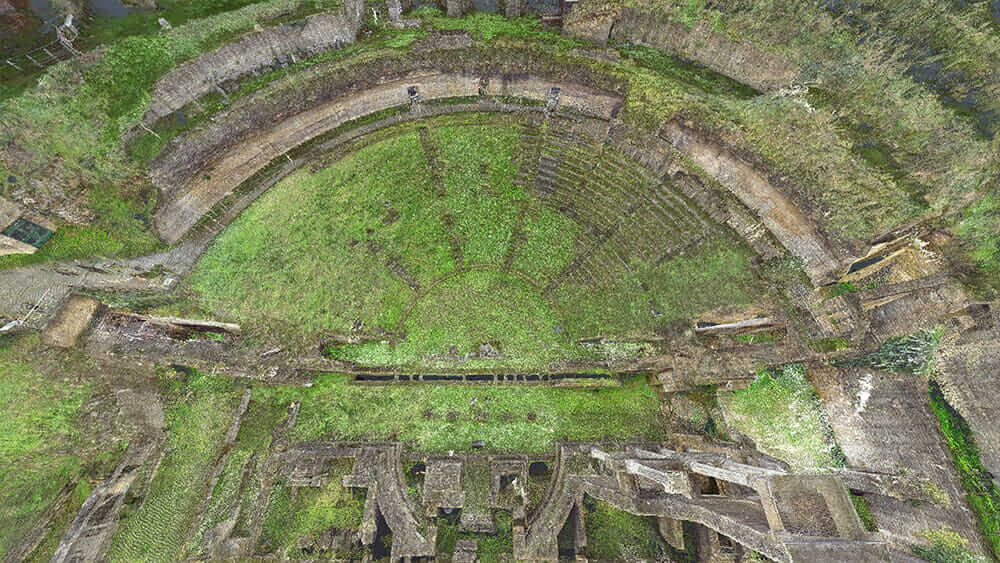 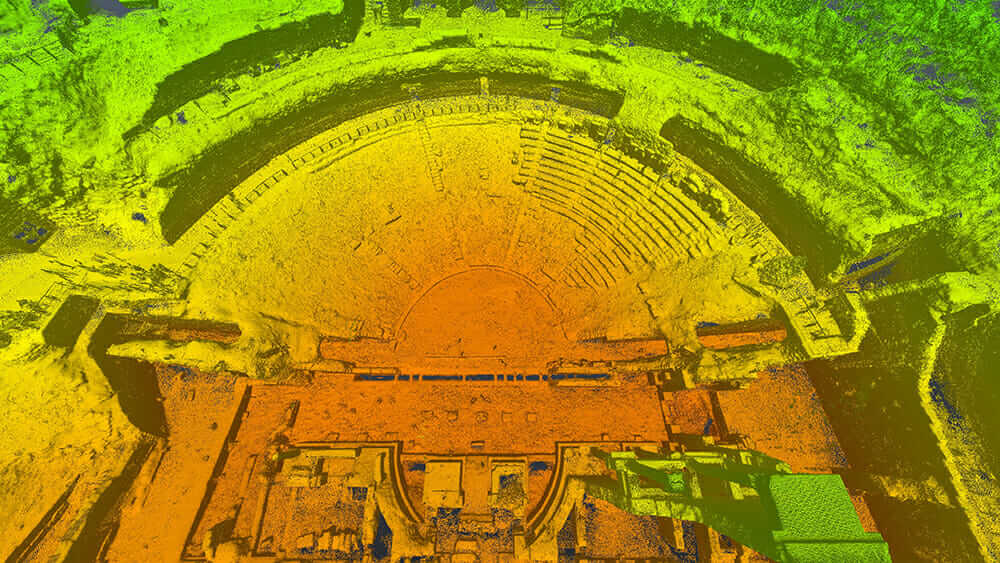 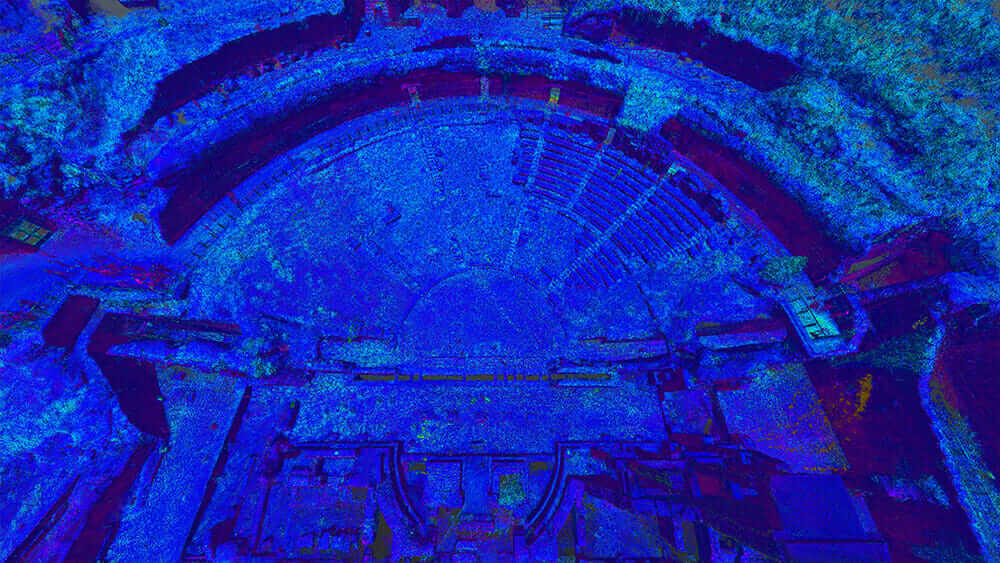 “The scans and models captured for this project can help with future restoration efforts or help re-create an archaeological treasure if needed, to see where a column fell, to go back to that exact point in time and say, ‘Here’s where the columns were,’ and put them back in scale, that’s pretty incredible,” Celender says.

The reality-capture workshop was rare for its historical significance, but not for its methods. Increasing numbers of construction companies and civil and environmental engineering consultancies are turning to drones to capture rich aerial data and generate detailed—and financially valuable—3D models of earthwork and building sites.

According to Celender, the types of projects that can be performed using drones run the gamut, from creating volumetric maps of material stockpiles for large mining companies to inspecting natural-gas processing plants and identifying the boundaries of protected wetlands.

Construction safety is another powerful case for using drones, says Hunter Cole, who is part of the Virtual Design and Construction team at general contractor Brasfield & Gorrie. Cole—along with Brasfield & Gorrie colleague Jesse Creech—presented a “Drones in Construction” lecture at the 2016 Autodesk University conference in Las Vegas. “Reality capture gives teams a new perspective to see every detail of a site in its current state and from a remote location. We can plan workflows and develop safety and site logistics plans that identify high-traffic areas, crane clearances, and areas where material will move in and out,” Cole says.

According to a March 2016 report from Goldman Sachs, construction will be the largest use case for commercial drones in the immediate future, generating $11.2 billion of the projected $100 billion in global spending over the next five years. CEC’s client list, which includes Walmart, Chevron, MarkWest Energy Partners, Williams Companies Inc., Waste Management, and various coal and aggregate mining clients, is perhaps a good indicator these projections are on track.

The economic benefit of using drones was apparent in a recent exercise to verify site work for the 61-acre Florida Hospital Apopka project: Cole estimates that surveying a site with a drone helped provide nearly a 75 percent time savings.

Rather than collecting survey points the traditional way—by shooting points on a predetermined grid—Cole says Brasfield & Gorrie’s Virtual Design and Construction group processed aerial data captured from a DJI drone using DroneDeploy’s mobile cloud platform. Through photogrammetry (measuring distances through a cloud of data points), the team converted this information into an elevation map and 3D model, which illustrated where they were in the process of moving soils to achieve the proposed grade.

“When people think of the types of deliverables offered with drones, they tend to imagine the relatively basic, but really cool pictures and videos, such as the construction progress updates of Apple’s new campus on YouTube,” Cole says. “But that’s just the low-hanging fruit: The data goes way beyond that.”

The future for companies using drones in construction is likely to get even rosier under “Part 107,” the Federal Aviation Administration’s new rules governing the use of drones by commercial operators. Under the regulatory framework enacted in August 2016, a traditional pilot’s license is no longer required to operate a small unmanned aircraft. Instead, passing a knowledge test can grant an applicant a certificate specific to flying a drone.

What the new rules mean for construction companies, Cole says, is a much more flexible path to getting in the air. “This is a huge accelerator for commercial organizations. A month ago, we had one certified pilot. Now we have seven.”

Cole, who possesses a remote pilot certificate, says the two-hour, 60-question test covers how to read airspace sectionals, calculate loads on an aircraft, understand weather theory and drone operations, and learn new Part 107 regulations intended to minimize risks to other aircraft, people, and property. Here’s a small sample from the full summary.

The rules make sense, Cole says, as a way to separate unmanned aircraft traffic from traditional aircraft traffic and maintain the safety of the national airspace for all. “Modern drone technology has come so far; the platforms are incredibly stable and intuitive for new users,” he says. “Even if you were to drop the controls, the drone will stay in place due to reliable altitude and GPS data.”

Still, Cole recommends that companies looking to pursue a drone program enlist the help of licensed pilots and plan their missions strategically. “We have an entire preflight checklist before ever even approaching a job site to first determine if it’s even possible. Will the mission be in a certain category of controlled airspace? Are there adjacent buildings and power lines we need to take into account? What will the weather be like? When will the fewest people be present on the site?”

And if the picture of a drone hovering over an ancient Italian city seems surreal, it is only a shadow of what’s to come. “Put it this way: We have now used drones on 19 different projects,” Cole says. “We’ve mapped 1,400 acres of Brasfield & Gorrie job sites. Over the next five years, we hope to use drones on most, if not all, of our 200-plus job sites. People often think of drones and reality capture as a future concept, pie-in-the-sky dream, but at Brasfield & Gorrie we’re seeing real value using UAS today.”

Click here to discover more of the latest construction technology trends from Redshift.

#Construction - #Drones - #Reality Capture
Jeff Link is a graduate of the Iowa Writers' Workshop and an Eddie-nominated journalist. His work has appeared in Landscape Architecture Magazine, gb&d, Redshift, and American Builders Quarterly.