Edwin Chan may be one of the most influential architects you’ve never heard of—unless you have a significant interest in Frank Gehry and his colossal, gravity-defying buildings.

As a design partner at Frank O. Gehry and Associates for more than two decades, Chan was integral to the design of the Foundation Louis Vuitton, a contemporary art center set in Paris, and the Guggenheim Museum Bilbao, a scintillating, titanium-cloaked juggernaut that breathed new life into the historic Basque city.

Today, Chan is the founder and creative director of the Los Angeles–based firm EC3, folding his interests in landscape design, grassroots urbanism, and low-cost construction into a unique architectural style. The studio’s first completed ground-up project—True North, a 7,000-square-foot development in Detroit’s Core City neighborhood—has created desirable live-work spaces for artists in an area of the city that hasn’t seen new construction in 60 years. 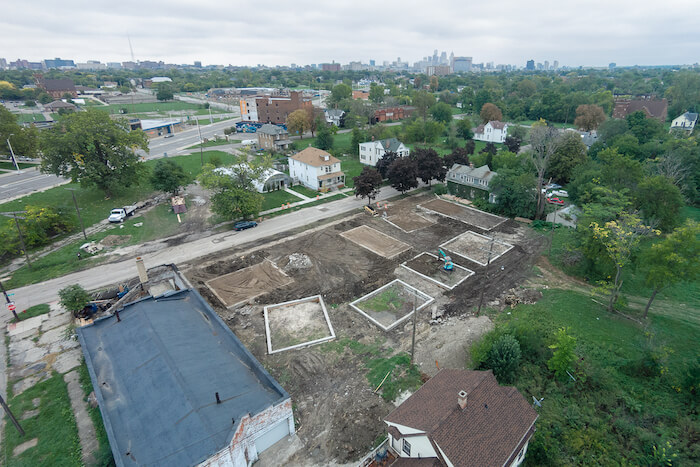 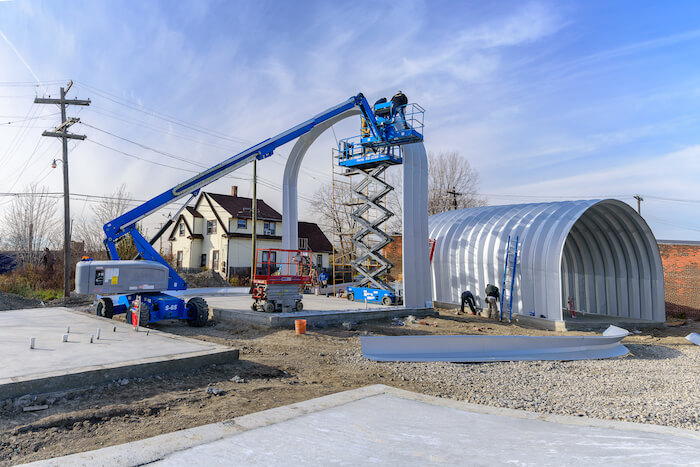 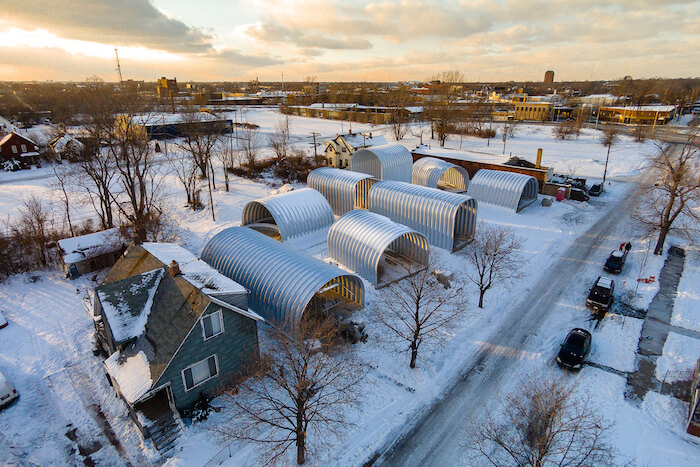 True North gives a stylish update of the Quonset hut—prefabricated semicircular structures mass-produced during World War II; the rental units and their verdant surrounding landscape have captured international attention. The $850,000 project was a finalist for the prestigious 2018 Mies Crown Hall Americas Prize, and a rendering of the project is now in the Heinz Architectural Center’s permanent collection at the Carnegie Mellon Museum of Art in Pittsburgh.

Here, Chan talks about his work with Gehry, the design inspiration for True North, and the collaborative process that drives his projects forward.

How did your relationship with Frank Gehry develop?
What interested me wasn’t Frank’s style, per se. When I started working for Frank, he was still a “California” architect, best known for his projects using unconventional materials in LA. He wasn’t yet a global “starchitect.” What was attractive to me was Frank’s relationship to the art world; I thought I could learn a lot from him. I was also drawn to the openness and horizontality of Los Angeles. I thought it was the future of cities.

Architects are incorporating prefab elements into their designs. Learn why.
Learn More

Architects are incorporating prefab elements into their designs. Learn why.
Learn More

What lessons did you learn working so closely with Gehry?
The first takeaway was collaboration. Frank’s office was not hierarchical. The design process was a creative partnership. The common misconception of Frank is he would scribble on a piece of paper, and people would build the scribble. But the process was much more complex and iterative; our dialogues led to design solutions that neither one of us would have arrived at on our own. Projects resulted from a three-way collaboration: Frank’s wisdom and experience, which was never prescriptive; capturing the client’s aspirations; and translating all that into a spatial and formal expression.

The second takeaway is a design process that relies heavily on physical modeling. Now that I have my own practice and work for some Silicon Valley companies, physical models turned out to be the most valuable tools. No matter how good architects are with scripts and software, we’re not better than the tech clients. But they’re addicted to the analog feel and materiality of models as a contrast to their own expertise; it’s a more tactile way to help them visualize the designs.

Describe your involvement in the Guggenheim Museum Bilbao.
It was the project of a lifetime. Two years ago, the museum celebrated its 20th anniversary. What I hadn’t anticipated was, 20 years later, it would still have such a significant impact on the local community. People were lined up around the block to get in.

When it first opened it was a novelty, but it has outgrown that. The so-called “Bilbao effect” is often misunderstood as “the sculptural image of the museum led to an increase in tourism and economic development.” While the iconic architecture of the Guggenheim was revolutionary, form without content isn’t meaningful. What made the building unique is that the architecture of Bilbao was a manifestation of the vision of the Guggenheim’s former director, Thomas Krens; the Guggenheim’s exhibition program at the time; and the aspiration of the Basque city and its people.

Why did you decide to launch EC3? What were your goals?
The idea started during the 2008 economic crisis. Even at Frank’s office, some projects got canceled or put on hold. I took a sabbatical—I did some teaching at Harvard and went trekking in the Himalayas. Having my own freedom made me realize that to grow further, I’d have to have to “grow up” and create my own architectural practice. I had three areas I wanted to explore further: urbanism, landscape design as part of architectural expression, and collaboration across all artistic disciplines. That’s why I named it EC3: Empowering Cross-Disciplinary Collaborations. 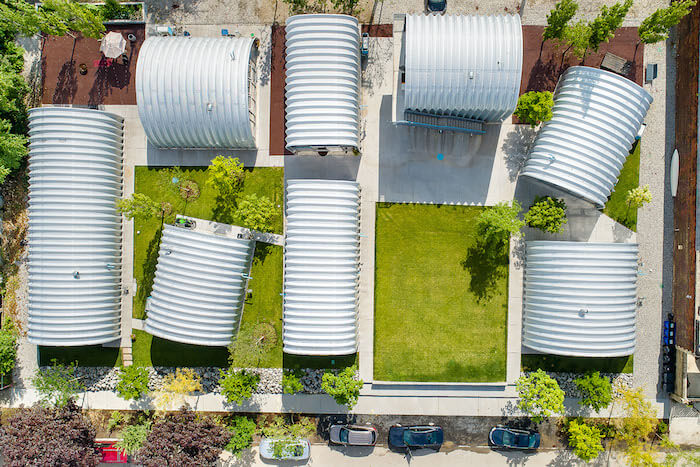 Aerial view of the completed project at True North in Detroit. Photo by Chris Miele, courtesy of Edwin Chan. 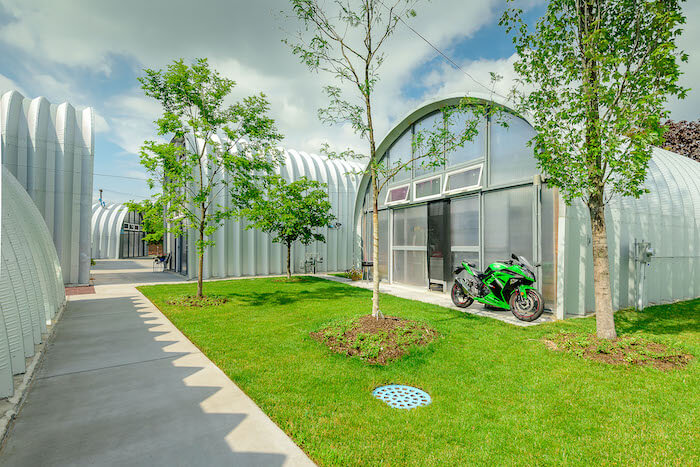 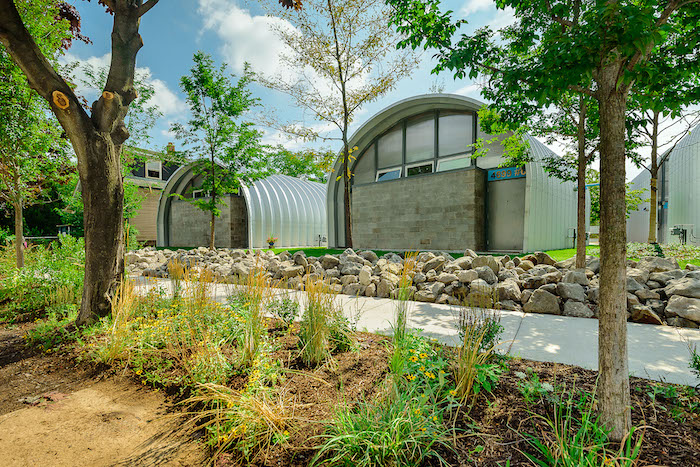 Your first ground-up project is True North. What inspired the unconventional design?
The client is Prince Concepts, a property-development company run by Philip Kafka. When he pitched the project to me, the requirement was there would be Quonset huts. That was part of his low-cost business model for a residential community. At first, I had reservations given their original use as army barracks and storage buildings. Then, I thought it would be a good design challenge to see if we could overcome the preconceptions of the form.

How did you proceed?
I followed three major principles. First, I wanted to introduce variety. The scale, orientation, and layouts of the huts create that diversity. Second, I didn’t want the huts to become sculptural objects by themselves. The site plan is designed to create a number of large and small outdoor spaces that accommodate yoga, barbecues, and other community activities. Finally, the interiors are very intimate and comfortable. They’re finished in plywood and drywall, and the end walls are glazed in transparent glass and polycarbonate panels to let in natural light while giving residents privacy. Big sliding doors open to the outdoors, and radiant heating in the concrete floors keeps them warm in the winter. 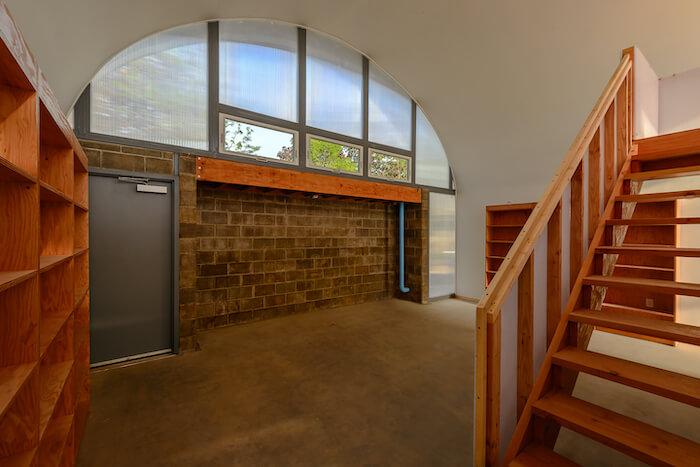 Interior view of the front of a True North hut. Photo by Chris Miele, courtesy of Edwin Chan. 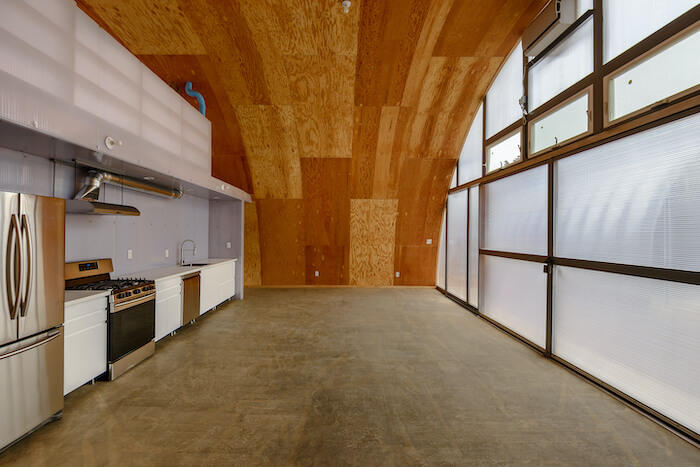 Another view of the True North hut interior, with polycarbonate "island" on the left. Photo by Chris Miele, courtesy of Edwin Chan. 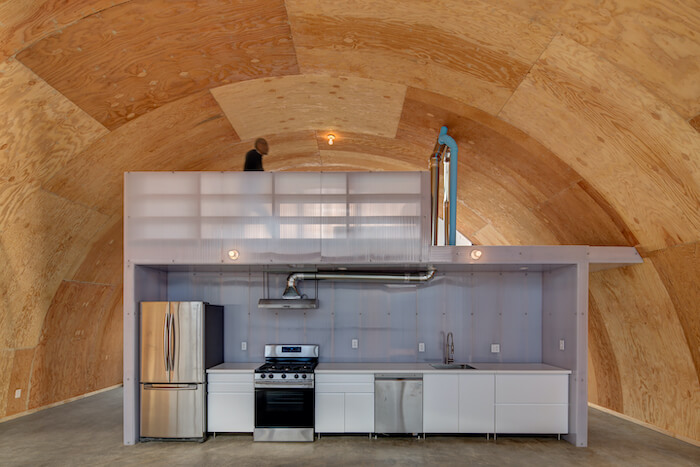 Front view of the True North hut’s polycarbonate island, which contains a kitchen, a bathroom, and a mechanical/storage closet. Photo by Jason Keen, courtesy of Edwin Chan. 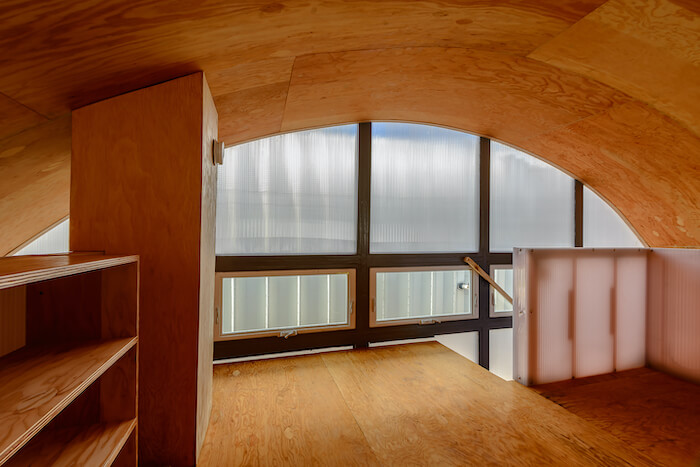 A view from the True North mezzanine, the platform located above the polycarbonate island. This platform provides additional space for occupants. Photo by Chris Miele, courtesy of Edwin Chan. 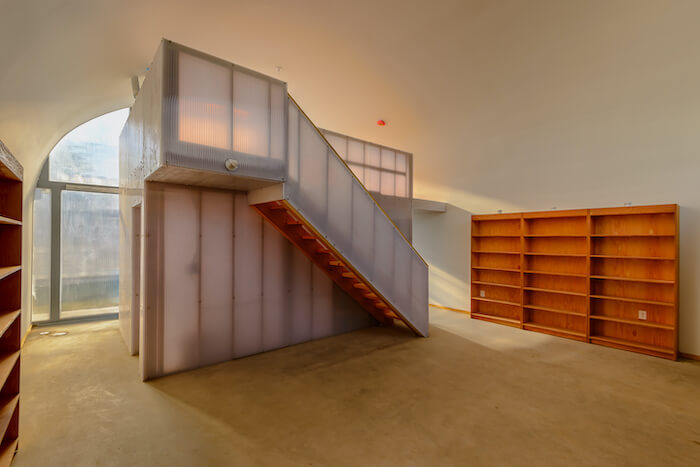 Another view of the True North island. Photo by Chris Miele, courtesy of Edwin Chan. 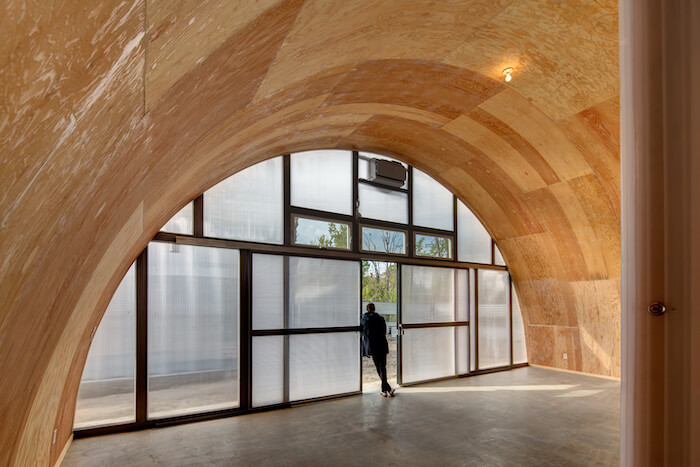 Using Quonset huts as residences is not a groundbreaking idea. But both Philip and I felt it was important to maintain the integrity and volume of the huts. We came up with the idea of adding a service “island” in the middle of the residences for bathrooms, storage, and mechanicals, with second-level lofts for sleeping. That allowed the rest of the space to be open and versatile for the residents—it’s become a real creative community with designers, artists, and creative professionals.

How do you incorporate digital and physical models into the design process?
We’re one of the few architecture offices that has a woodshop with old-school power tools. Physical models are useful for exploring ideas and conveying the materiality of a project. We use American basswood, cardboard, and paper for space planning and form finding. Building information models help us rationalize these forms and streamline communication with consultants. More sophisticated prototyping techniques—3D printing, laser cutting, and milling—come in for later-stage prototypes.

How did you carve out your own niche while working with a high-profile architect such as Frank Gehry?
When I first started my practice, I was nervous about people making a comparison to the work at Frank’s office. The last thing I wanted was for people to think I was replicating his style. So far, I haven’t heard that comparison. I think part of the reason is that projects like True North aren’t what you’d typically associate with that background. Now people can see for themselves what I’m capable of, bringing my passion for the arts and instinct of collaboration to new architectural programs.