Many professions with unique physical challenges come with corresponding ailments. For example, athletes suffer from ACL and hamstring injuries; astronauts deal with muscle atrophy and radiation exposure. Although it may be surprising, tattoo artistry also comes with its own health hazards.

“Arthritis and other rheumatic diseases are common not only in tattooists but anybody holding something like a pen or pencil for prolonged periods of time,” says Richard Beston, a UK tattoo artist known professionally as Bez.

“When we draw or write, our grip uses more muscle power than we’re aware of, which causes strain to the body,” he says. “When we use a weighted, vibrating tattoo machine, the strain is amplified, so there’s more potential for health complications. Conditions like carpal tunnel syndrome are common in tattooists and can mean a short career.”

Bez came to tattooing comparatively late in life and had already dealt with back problems, which made him very aware of his body while working. After he established Triple Six Studios in Sunderland, England, Bez noticed that standard tattoo machinery left a lot to be desired when it came to ease of use, even for artists without health issues. The ergonomics of tattoo guns (the devices used to apply the ink to skin) were terrible. Colleagues echoed this sentiment, so Bez set about remaking the machine completely. This led to founding his tattoo machine company, Ego, and creating a better tool for his own self-preservation and the health of fellow artists.

Beyond Ink With the Ego Tattoo Machine

Traditional tattoo-gun grips are thin like pencils, so sustained pressure is needed to hold them steady. Add the many hours it can take to apply a professional tattoo, and the result is the pain (and callouses) tattoo artists know too well.

Bez was not an engineer and had never designed or built tattoo machinery, so he had to first teach himself how the machines work. Although they are relatively simple devices, the learning curve was steep. 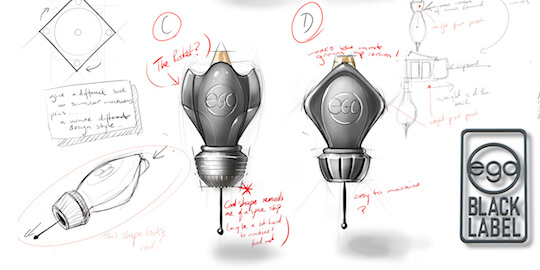 Learn how Fusion 360 for microbusinesses helped Ego launch as a start-up.
Read More

Learn how Fusion 360 for microbusinesses helped Ego launch as a start-up.
Read More

His former career designing real-world objects in the digital realm helped. “I have a background in the computer-games industry, which gave me a lot of experience working with 3D design software,” Bez says. Using CAD and Autodesk Fusion 360 to conceptualize his tattoo-gun designs wasn’t too big of a leap—a lot of the basic functionality translated across professions.

A major flaw to address was the weight distribution of traditional tattoo machines. The first priority was shifting the center of gravity away from the back of the hand, letting the artist hold it more like a pen. That meant redesigning the internal mechanism.

In older machines, that mechanism is a coil, but Bez fashioned a unique rotary system with lubrication-free bearings from igus, a specialist manufacturer of plastic bearings. This damps the needle more effectively, reducing noise and vibration. Later Ego models introduced a linear needle motion that converts the rotary motion to a linear drive using special rails, resulting in more accuracy because it removes the side-to-side vibration of traditional machines.

After the mechanism was designed, Ego’s first innovation was a larger, softer tattoo gun grip (the Biogrip), which requires far less pressure to hold. Another advance was what Bez called the Power Triangle, which was so revolutionary he sought a patent. Those two products signaled that Ego had evolved—before long, it was a thriving business.

Ego became more than just a tattoo-instrument company. Other types of artists have been enthusiastic adopters, and Ego even developed specialized grips for the Apple Pencil. A surprising new market also opened up: learning. “We find kids with learning disabilities love it,” Bez says. “It makes learning fun for them, and their writing improves massively. We’ve got really good feedback from teachers.”

The company’s growing portfolio of medically oriented grips includes the Flo, which looks like the world’s coolest gaming mouse, fitting into and supporting the palm while gripping the pen adequately. This improves writing posture and greatly helps with hand or finger injury, repetitive strain injuries (RSI), carpal tunnel, arthritis, and so on.

The Contour grip more closely resembles the traditional way of handling a pen, but it uses the weight of the hand to write rather than users having to press down with the pen and strain muscles. The Curve helps with writing or drawing, reducing the finger strength needed or allowing for an irregular grip that lets users fit to their limitations and needs. Bez and his partners have found it the best for small hands and the limited motor control that can accompany developmental disabilities.

The company grew fast and had to relocate several times. But Bez says that success was never his intention. “The aim was just to make life easier for artists,” he says. “But knowledge and understanding of the business aspects of doing this has been another steep learning curve. We outgrew our original facilities when we realized the products were in such demand.

“We needed a more sophisticated operation, but turning the concept into a business has been one of the biggest challenges,” he continues. “We’re learning how important marketing and market research are, as well as simply design. The business has been the result of our attempt to fix those problems as we’ve become aware of them.”

Bez and his team also streamlined their prototyping methods. It’s been an iterative process to find the best way to build and test new models. “In the past, a design was sent to Germany or China, and I’d have to travel there to check the prototype, make changes, wait for them to be made, and then review it again,” Bez says. “It was time-consuming.”

That was until about seven years ago, when Ego invested in a 3D-printer fleet from MakerBot. Bez says Ego’s technology has grown increasingly sophisticated and more impressive since then: “Using the Formlabs Form 2 printers we have now, we can get 20 or 30 iterations done and tested in a week or two. Instead of spending so much time and money on reviewing products, integration with the current software makes it easy for another team member to make changes and get results in a matter of hours.”

“We’re increasingly expanding with more 3D printers and tools, so we’ve had to upgrade our premises,” he says. “We hope this will be somewhere that lets us bring in like-minded people to use our equipment for creative purposes. My ultimate aim is a collection of talented individuals in a hub of amazing ideas and products without having to travel all around the world to do it.”

Bez and colleagues were firming up new supplier relationships for other products—many of them overseas—when COVID-19 shut down everything. That put Ego in an impossible situation: Without its primary market, the company needed to expand, but the supply to do so had been interrupted.

See Also: Convergence in Manufacturing Is Good for Consumers and the World They Live in

But Bez considers himself an inventor above all else, so turning to other products is in Ego’s DNA. He’s currently developing knee and wrist braces to provide more ergonomic support for Ego users. And after the shocks to global trade practices, the company is doing due diligence to bring much more in-house. “We wouldn’t normally have moved so quickly,” Bez says. “But when the tattoo industry disappeared for a year, we looked at each other and said, ‘What do we do now?’”

One impactful change to the business has been prioritizing sustainability, using recycled plastic for Ego’s flagship products. “There are moral implications,” Bez says. “We’re trying to reduce our carbon footprint now because that’s going to become a bigger and bigger thing for the industry in general and just from my own personal standpoint.”

It all points to a company—and an industry—in flux. Ego manufactures in plastic and metal but is seeking ways to make its products more earth friendly. It’s also eyeing expansion but wants to bring more processes under its own roof. Art can generate serious commerce; when a game designer can be a tattoo artist, entrepreneur, and inventor, anything’s possible.

“The combination of working as an engineer and a tattooist keeps me creatively stimulated,” Bez says. “And I’m able to get a lot more gratification out of both disciplines.”

This article has been updated. It was originally published in September 2019.

#Additive Manufacturing - #Makers - #Product Design - #Prototyping
Drew Turney writes about technology, cinema, science, books, and more.
Success! You’re in.
IoT and AI and VR, oh my!
Learn all about it in our newsletter.
By signing up, I acknowledge the Autodesk Privacy Statement.
Manufacturing
Convergence in Manufacturing Is Good for Consumers and the World They Live in
Manufacturing
Technology Is Enabling Vaccine Delivery and Management in Emerging Markets
Manufacturing
History of 3D Printing: It’s Older Than You Think