Since the invention of photography, the Eiffel Tower has been immortalized from every angle—a symbol of Paris around the world. Thanks to BIM (Building Information Modeling), this collective memory of the Eiffel Tower has now been permanently captured in a new medium: the 3D model.

The city of Paris used BIM to immortalize a 133-acre area, including the iconic tower, for “Grand Site Tour Eiffel,” an international design competition. Created in partnership with Autodesk, the resulting urban model is the largest of its kind in the world. Containing 342 GB of point-cloud data, it accurately represents every building, road, tree, and fountain on the site.

This model wasn’t just created to immortalize the Eiffel Tower and its surroundings; it was used to renovate them.

The competition brief was to modernize the visitor experience of the Eiffel Tower area while respecting its history. Teams of architects, urban planners, engineers, and landscape designers from around the globe were all encouraged to submit their designs.

Each project needed to be based on a common digital model to ensure all teams could compete on equal topographical, technical, and technological footing.

Inside a Virtual Viewpoint

The challenge of creating this urban model for the competition was twofold. First, candidates had to be able to view the landscape from every angle in order to properly modify it. Second, projects had to be open to public participation. Each had to offer the jury and Parisians alike a virtual-reality (VR) tour of its potential new Eiffel Tower area. This allowed Parisians to provide feedback on the many proposals before they went to the jury for a final vote. 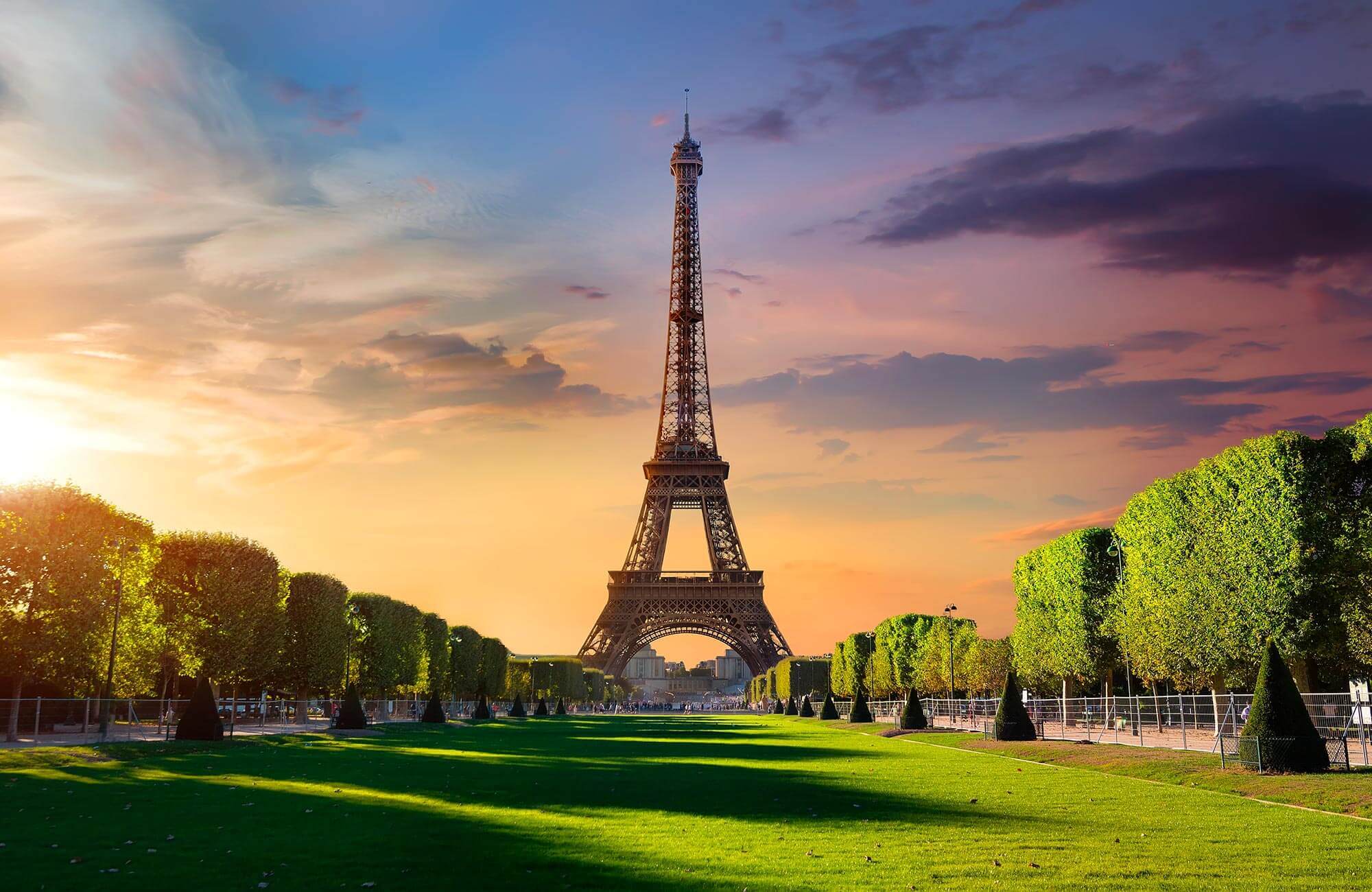 Using scan-to-BIM technology, Autodesk worked with French surveying firm Gexpertise for several weeks to map a 3D model of the site. To capture information, Gexpertise used LiDAR, dispatching land-based and mobile laser scanners, drones, and even cameras perched on gondolas. The team then used photogrammetry to acquire a global point cloud representing a complete topography of the area.

“In addition to the site’s heritage and symbolic nature, the acquisition of data for public use represented an unprecedented request—especially considering the scope of the project,” says Pauline Barbier, associate director of Gexpertise’s modeling division.

A surveyor’s precision was particularly valuable. The topography of the 133 acres proved to be extremely complex: Every detail—from gravel paths and fountains to the area’s 425 benches, 560 light fixtures, 25 statues, 100 garbage cans, 1,000 buildings, and 8,200 trees and flowerbeds—all had to be recorded and textured. Hundreds of hours of data capture were all processed using Autodesk ReCap. This resulted in a massive set of more than 10.3 billion points, or 342 GB of point-cloud data. 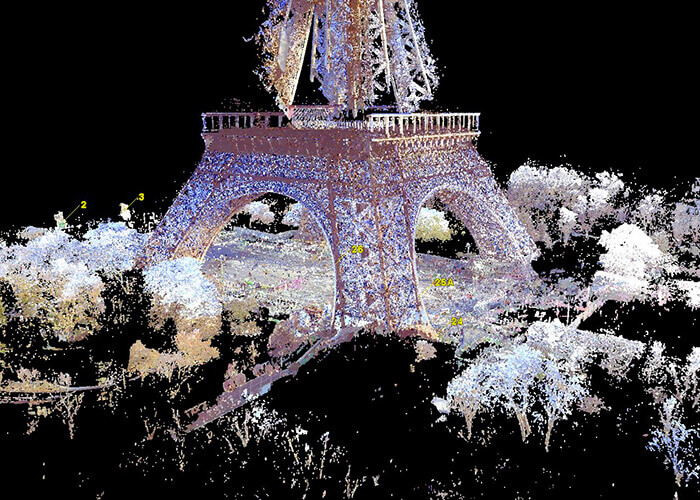 Autodesk worked with Gexpertise for several weeks to map a 3D model of the Eiffel Tower area. The result was a massive set of more than 10.3 billion points, or 342 GB of point-cloud data. Courtesy of Gexpertise. 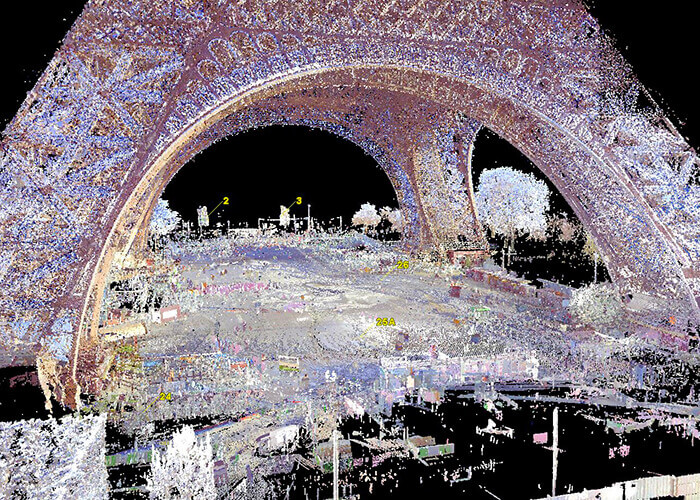 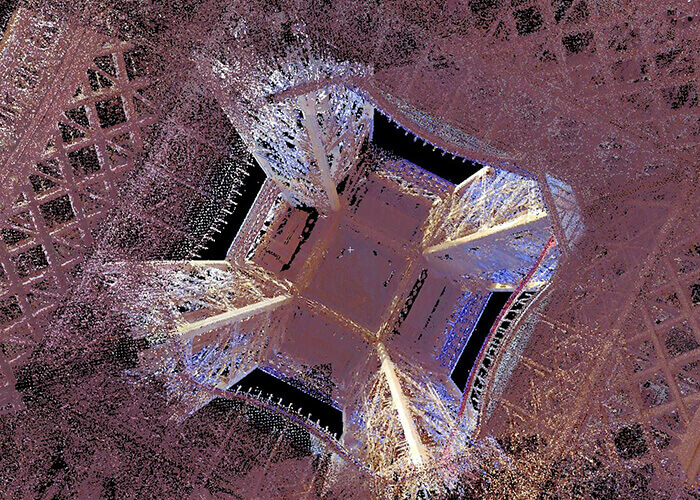 Once this work was completed, the talents of Gexpertise were combined with those of Canadian engineering firm WSP, a specialist in 3D urban-scale modeling. Processed in Autodesk InfraWorks, the surveys extracted and rasterized nearly 200 point clouds, which were then used to generate two VR models using Autodesk 3ds Max and Unreal Engine.

“Our initial mission was to produce a model that could be used by the architects and engineers applying for the competition,” says Kevin Gilson, manager of design visualization at WSP. “The aim was to help them understand the existing context while also serving as a basis for their projects. These had to take into account both the landscape and the architectural constraints of a listed site. 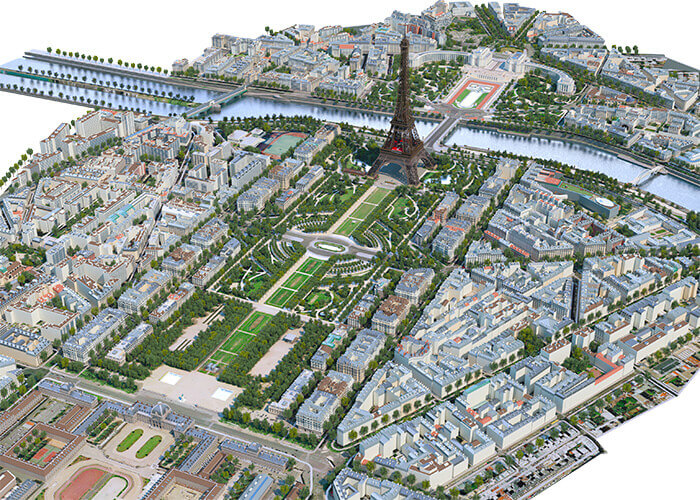 WSP's surveys extracted and rasterized nearly 200 point clouds to generate two virtual-reality models of the Eiffel Tower and its gardens. Courtesy of WSP. 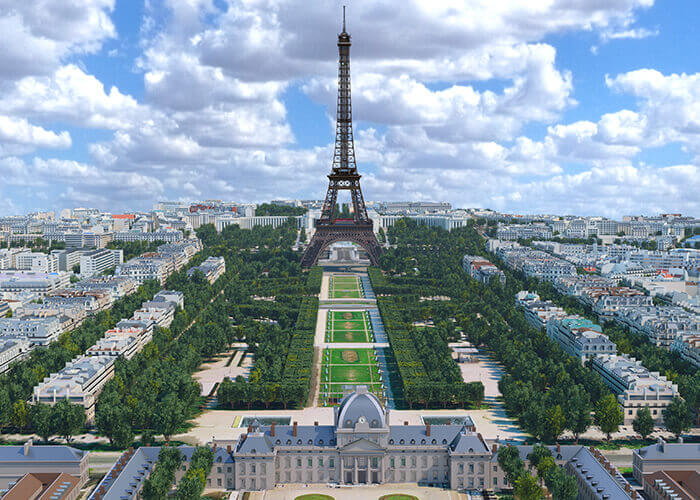 3D render of the Eiffel Tower and its surrounding gardens. Courtesy of WSP. 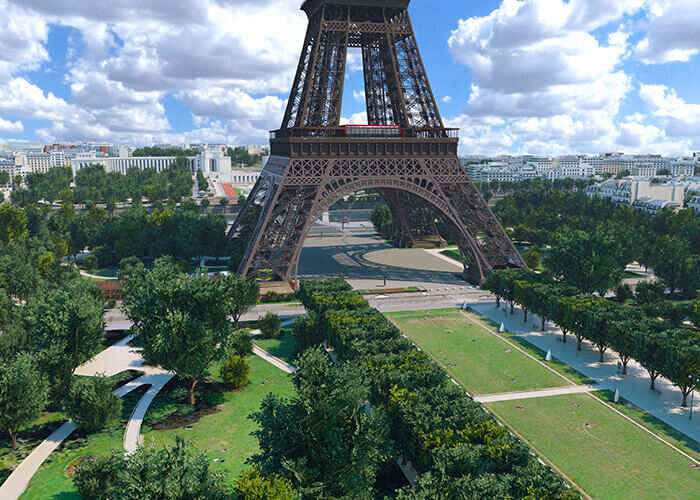 3D render of the Eiffel Tower and its surrounding gardens. Courtesy of WSP.

“I myself visited Paris several times throughout the project,” Gilson continues. “I think that even with the accuracy of the data, it is essential to breathe the atmosphere of the places you are working on to stay as close as possible to reality.” This step provided an opportunity for WSP to collaborate closely with architecture and urban-planning agencies, as well as engineering firms, via Autodesk’s BIM 360 platform.

The Canadian company then integrated models provided by the competing teams into the second model, which served as a master model, before generating an interactive 3D version of each of the four projects in accordance with the city of Paris’s “Discover, Approach, Visit” initiative.

The Countdown to a New Park Begins

The final step was to present the projects to the community. The public previewed designs and shared feedback on a dedicated site. Projects then went to the jury.

Following each competing team’s final challenge, which involved oral presentations before the jury, the plan from agency Gustafson Porter + Bowman and its partners proved to be the most convincing proposal.

The redevelopment of the area around the Eiffel Tower will take place between 2021 and 2023. The site will remain open to the public throughout this period so the world can witness the transformation of one of its most iconic spaces.