Today, the Eiffel Tower is the most iconic symbol of Paris—an enduring legacy for a structure that was never meant to be permanent. Built for the 1889 Exposition Universelle, the Eiffel Tower was slated to be dismantled 20 years later. Fortunately, the then-tallest monument in the world was saved by the growing importance of telegraphic transmission when it became a totem of the technology.

Since then, the Eiffel Tower’s surroundings have changed with the passing landscape-design fashions. Today, the Champs de Mars and its lawns, like the Place du Trocadéro, are congested with tourists. Some 20 million visitors flock to the foot of the tower every year, 6 million of whom choose to climb at least to the first floor of this 1,063-foot structure.

In advance of the 2024 Summer Olympics in Paris, 133 acres of park land will be redeveloped along the Eiffel Tower. To choose a design, the city held a competition called the Grand Site Tour Eiffel. It was important that the iconic structure, which Parisians refer to as the “iron lady,” would be treated in a way that respects its history and natural environment, returning many areas to plants, parks, and pedestrians.

According to a brief by Paris’s city council, the park redesign is meant to “create and stage urban and landscape paths, rebalance the use of public space in favor of pedestrians, and ensure optimal management of traffic flows.”

Landscape architects faced the task of modernizing the area while respecting the spirit of this beloved place. Paris imposes an additional challenge of working within particularly restrictive urban planning codes—the area is classified as a “safeguarded sector,” so the slightest change is subject to city approval.

The Grand Site Tour Eiffel award, chosen from 42 entries, ultimately went to landscape architects from London studio Gustafson Porter + Bowman (GP+B). Following strict parameters, GP+B created its OnE (One Line) project. The firm’s initial idea was to strengthen the axis from the Trocadéro to the Military Academy. “To achieve this, we decided to re-create a grassy square in the Place du Trocadéro and to accentuate the space occupied by the tiered steps around the Varsovie Fountain by designing a stepped slope,” says Mary Bowman, a landscape architect and one of the authors of the project.

The deck of the Pont d’Iéna bridge will be adorned with vegetation and returned to pedestrians. Bowman says the firm is also proposing a reinforcement of the lawn surfaces on the Champs de Mars gardens; they will be raised by about 12 inches, which will “enhance the perspective of the central axis,” she says.

Merging the 19th and 21st Centuries

Using scan-to-BIM technology, Autodesk and French company Gexpertise created a site model for competition participants and to illustrate the final design. The model was based on nearly 350 GB of cloud-point data (surveyor data) collected by scans and photogrammetry of the area around the Eiffel Tower between the Trocadéro site, the Champ de Mars, and along the Quai Branly, as well as between the Pont de l’Alma and the Pont de Bir-Hakeim.

The defined area includes buildings, roads, pedestrian walkways, green spaces, and the Seine. Based on this, a simplified model was produced using Autodesk InfraWorks for the candidates to develop their Grand Site Tour Eiffel project entries. 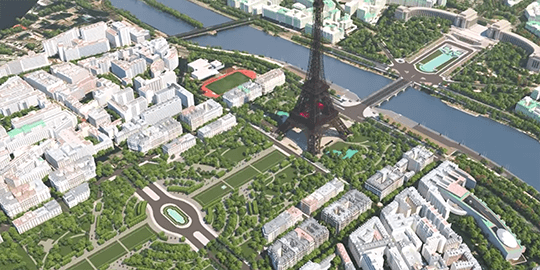 View the 3D model that will be used during the restoration of the Eiffel Tower site.
Watch Video

View the 3D model that will be used during the restoration of the Eiffel Tower site.
Watch Video

By reverting pedestrian spaces that had previously been gobbled up by cars and paved surfaces, GP+B is hoping to create a new visitor experience of Paris. “We carried out a sociological study with an observation of traffic flows, as well as historical research work,” says Gilles de Wever, a landscape architect at GP+B.

The picturesque gardens along the axis crossing the Eiffel Tower will be remade “in an English style, highly floral with its irregular shapes yet molded in a very French linear spirit,” de Wever says. The firm will also bring an impressionist touch, adding a mixture of plants traditionally used in parks and gardens at the time of the tower’s construction.

“We call these plants ‘memory’ plants,” de Wever says. “They characterize the strolls people once took through the parks and gardens of the 19th century.” The palette includes nectar-bearing and fruiting native plants, which de Wever says will “maximize the attractiveness of the whole, including pollinating insects, birds, and other microfauna.”

From a strictly environmental standpoint, GP+B plans to add more green spaces and permeable surfaces to the site to promote drainage and biodiversity. As the seasons go by, the floral park will change in this renowned promenade. To preserve the lawns, which will remain accessible, new seating solutions will be proposed.

This redevelopment of the area around the Eiffel Tower will take place between 2021 and 2023, keeping the monument open for visitors—that is, as soon as Parisians and world travelers are able once again to enjoy one of the world’s most treasured spaces.