The global auto industry is scrambling to adapt to a number of major changes: increased regulations mandated by governments and the Paris Climate Change agreement, dizzying technological breakthroughs (some of which put the industry in direct competition with tech giants such as Google), and consumer demand for greater efficiency and lower carbon emissions.

To this end, automakers are looking for ways to improve engine performance and reduce vehicle weight, reexamining the 30,000-plus parts that make up a car, such as the steering wheel, pedals, seats, engine, brakes, and one key component tiny enough to rest in the palm of your hand: the engine control unit (ECU).

The ECU is an electronic fuel-injection control system that determines the proper fuel supply required by the engine: Think of it as the “brain” of the engine. This system plays a critical role by optimizing the amount and timing of fuel injected, which can improve driving performance and reduce the amount of harmful emissions.

Okamoto is developing ECUs for mounting on small diesel engines used in construction and agricultural machinery, incorporating generative design into his workflow to create advanced conceptual models. “From the outset, I designed the components with lightness in mind,” Okamoto says. “I realized I could then use generative design for even greater weight reductions.” 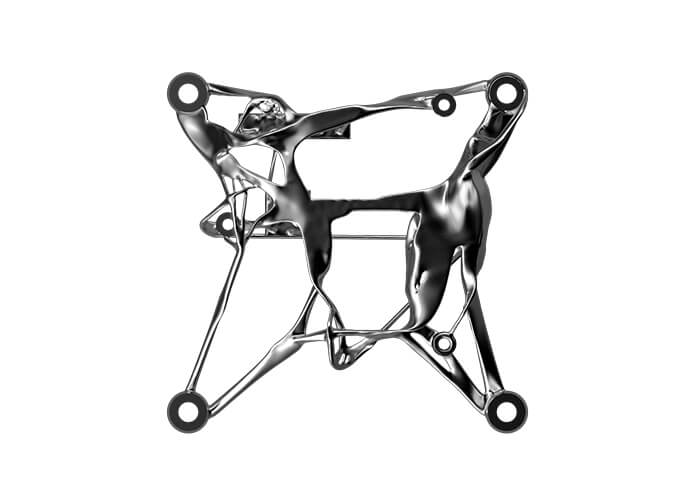 A frame for direct mounting of an ECU unit to an engine block, created using generative design. Courtesy DENSO Corporation. 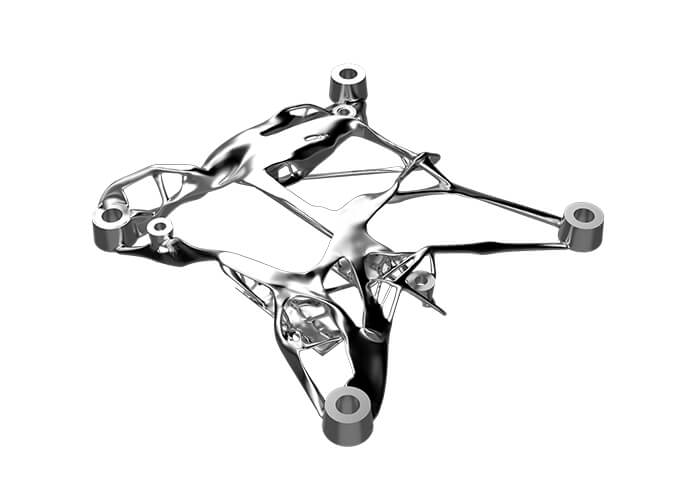 An engine’s “room temperature” can reach 120°C (248°F). To operate without problems, the ECU hardware’s temperature needs to be lower than that by dispersing heat from where it contacts the engine block, where temperatures are about 105°C (221°F).

“I can draw on my experience to visualize a shape that disperses heat well,” Okamoto says. “However, in a lightweight design, there are fewer pathways for drawing off heat, which reduces the heat-transfer efficiency. I thought I could use generative design to create parts using new shapes that are lighter but still retain heat-dispersing properties.”

In his research, Okamoto used the generative-design features of Autodesk Fusion 360, even though it does not offer heat-related parameters. “To calculate for heat, I hypothesized I would need to treat the heat as load, so by adding load to areas that need to disperse heat, the optimal shape could be found,” he says. DENSO collaborated with partners at the Nichinan Group and with designers Satoshi Yanagisawa and Yujiro Kaida during this process.

In generative design, AI creates copious design variations based on the designer’s provided parameters. By sifting through the choices—discarding unsuitable designs and accepting others—a person arrives at the optimal design. “Our work designing this ECU was a process of trial and error, and many unusable designs were generated,” Okamoto says. “However, variations that could be used began to have similar shapes.

“What I liked about this process was that I could make a 3D print of a model and get a better sense of how the heat would flow around that part,” he continues. “Lots of the models were ugly at first look, but you began to see the beauty in these designs. The final design had a beautiful shape that we modified to allow for manufacture using conventional methods.”

Objects created with generative design can be difficult to produce without 3D printing—which is unsuitable for mass production. “When you need tens of thousands of parts, cost and production time become challenges,” Okamoto says. For this project, the team incorporated elements from the generative-design process into a part that conventional die-cast molding could produce.

To do this, a geometrically shaped circuit-board cover was made and integrated with a frame created through generative design. Autodesk Alias SpeedForm and Fusion 360 were employed to taper the overall body and give it a smooth shape, and adjustments were made for production via conventional manufacturing methods. “We combined the essentials of each component to create the shape of the overall unit,” Okamoto says.

A metal-cut mockup of the result is called the Direct Mounted ECU Concept. “We realized a 12% overall weight reduction,” Okamoto says, “but we could maintain the heat-dispersing capacity of the original. While the reduced weight meant there are fewer paths for heat to escape, since the performance is identical, we can say the exothermic capacity of the part has improved over the original.”

Although Okamoto had experimented with other approaches to weight reduction, such as topology optimization, this was the first time he tried generative design. The project took about three months to finish. “While it took us a little time to get up to speed, we achieved results in a relatively quick time frame,” Okamoto says. “We think we will realize even greater gains with larger ECUs, and we have found areas we can further refine in the next round of design work.

“If we can lighten each part one by one, even slightly, the overall result will be a much lighter automobile,” Okamoto continues. “We can apply these results toward other parts beyond ECUs. It would be ideal if we can apply these methods regularly to lighten automobiles overall. While this model is just for proposal to our clients, our next step is to put in the electronics and test its performance to see the actual results of our work.”