The stone-production business has evolved over the years—a process that was once largely done by hand has morphed into the use of automation and new technologies such as BIM (Building Information Modeling) to stay competitive.

Franken-Schotter is a natural-stone manufacturer based in Germany that produces and delivers approximately 2 million metric tons of stone each year, extracting from its own four quarries. The company attributes its staying power—nearly 50 years in the business—to embracing new technologies and becoming a modern facility.

Jonah Wurzer-Kinsler, Partner/Architectural Consultant, Franken-Schotter: We started as an aggregate producer. We only quarried the very bottom, and we would then sell off those stones that were done for natural-stone production. In the ’90s, we then started our own natural-stone production. Very quickly it becomes very capital-intensive. We’re also competing with Turkish stones and Portuguese stones, and areas where the labor costs are much lower. So we need to be much more efficient in the practices that we do.

The old way, when I was here 20 years ago and working out on the floor, it always seemed very chaotic. There were pieces of paper flying around where they were just marked, “30 pieces of this and this size in a crate,” and then it went out there somewhere, and somehow it got packed up and somehow somebody knew to pick that up. Some orders would just kind of get lost because a piece of paper would be lost. And that just doesn’t happen anymore.

These projects are taking years and years to develop. Our wholesale market is consistently shrinking, and I don’t think that’s coming back. So we’re gonna be much more dependent on projects, and that starts with the architects.

Here we’re in the quarry—it’s dirty, we’re working with stone. It’s loud, it’s noisy, it’s difficult. So that’s always going to be a challenge for us—to make this workplace attractive. And we can do that, I believe, by really advancing our technology and bringing people we have and moving them into areas where they can work with computers and work with automation.

Heinz Zierer, Plant Manager, Franken-Schotter: Well, the natural-rock industry has changed quite a bit in the past 20 years, away from manually powered, manually operated machinery and toward CNC-controlled machines. We chose the robotics industry for commercial reasons because a robot like that has the potential to achieve high performance with relatively few staff.

Marc Assmann, BIM Process Specialist, Franken-Schotter: Communication with our customers is obviously very important. Thanks to digitalization, we can create visualizations, renders, and simulations in digital form, which we would formerly have created manually. Doing all this digitally reduces our travel expenses and shortens the project-definition phase until a decision is reached on what stone we should work with. Basically, we create a digital mockup and generate a physical mockup in-house from that. The customer can then visit our facility and use the mockup to choose the patterns of the individual stones for their project.

Zierer: The stone industry isn’t very easy. To survive in it and achieve relatively decent results, it’s actually very important to have easy access to resources and to be able to process the products to the end.

Assmann: The biggest advantage of BIM for us is the variety of data sets that our customers provide us with. They’re very varied, like a colorful bunch of flowers full of different things or sometimes missing things, which makes it very important for Franken-Schotter to create a unified platform. BIM definitely helps us with that and allows us to put in place structured and standardized processes throughout all departments within the company. Having employees who are both experienced and technologically and computationally knowledgeable helps us to combine tradition and progress and generate a very good product in the digital world as well as the physical one. 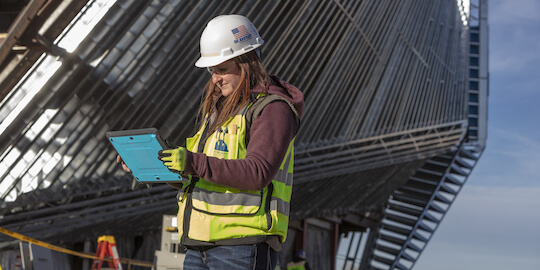 Learn how to design and build better with BIM.
Learn More

Learn how to design and build better with BIM.
Learn More

Wurzer-Kinsler: We need to use water for the saws. It needs to cool the saws—that’s important. So we have a water-treatment plant here where we press out all the sludge and the stone sludge that’s there and recycle that water and put it back into our facilities.

Zierer: We’re able to process all of the waste to the last grain. That’s not a given in all the other companies. So the work that I do, I have fun doing it. In my opinion, if you’re not having fun at work, you should look for another job because we have many, many years in our lifetimes.

Wurzer-Kinsler: You either need to go with new technology or you’re not gonna really do any work anymore. The architects are becoming more and more demanding. People on the jobsite are becoming more and more demanding. They need to know what is going to happen when, and it’s a very high labor-intensive industry. People want to work with computers. They want to work in automation. They want to program these machines, and they want to see something to move them. They want to be proud that they’re working for a company like Franken-Schotter, who I really feel like we have one of the most modern factories in Europe—if not in the world—as far as stone processing is concerned.