Dozens of neatly arranged gray metal boxes quietly hum in rice fields nearby Wollong-myeon, Paju, Gyeonggi Province, South Korea. These boxes are fuel cells, and they blend right into the surrounding landscape because, unlike conventional power plants, fuel cell technology generates electricity without combustion, so it is environmentally friendly and quiet.

The Paju fuel cell plant is highly regarded for creating economic value through green and efficient power generation and for building social value by developing an underserved rural area. Fuel cell technology that offers both economic and social benefits will become Korea’s core energy source in the future.

Fuel cell technology is a highly efficient, eco-friendly technology that generates electricity through an electrochemical reaction between oxygen and hydrogen extracted from liquefied natural gas (LNG). Fuel cell technology is a distributed-energy resource that can generate energy conveniently and safely, especially in rural areas with low population density, such as Wollong-myeon in Paju.

In Paju, city gas companies have faced difficulties in establishing a supply pipeline in the rural area due to its lack of economic feasibility. The Paju fuel-cell project development included the installation of a city gas pipeline network in the areas where city gas has not been serviced, enabling 74 rural households to enjoy energy welfare.

The Paju fuel cell is the first project in Korea to achieve a win-win fuel cell business in rural areas by allowing city gas companies to secure city gas consumers and by allowing rural residents to use the city gas pipeline. SK E&C plans to continue developing this region-customized business model.

SK E&C used Autodesk Revit to support BIM workflows, as well as Assemble and BIM 360 for efficient project management. From start to finish, everything was paperless and on the cloud.

“Real-time, cloud-based collaboration systems helped create the foundation for us to operate as one team, both internally and with our partners, resulting in a shorter construction period and improved productivity.”—Mook Lim, Head of Fuel Cell Tech Unit, SK E&C

These connected BIM solutions brought design and construction models into a 3D environment, which could be viewed and worked on from anywhere. This process was critical, as South Korea was among the first countries to be impacted by COVID-19 in early 2020—just when construction was due to start. The pandemic forced engineers to embrace new technologies, with positive results; workers found they could collaborate with greater flexibility from their smartphones, tablets, and PCs. Daily life around the world was halted due to COVID-19, but the Paju project was not affected; rather, the construction period was actually shortened, thanks to cloud collaboration.

“Amidst this pandemic, we actually created an opportunity to go one step further,” says Mook Lim, head of Fuel Cell Tech Unit at SK E&C. “Real-time, cloud-based collaboration systems helped create the foundation for us to operate as one team, both internally and with our partners, resulting in a shorter construction period and improved productivity.”

The 3D model was able to identify potential construction issues and key management points in real time, enabling the team to take preventive measures that contributed to shortening construction time by 20% and reducing construction costs by 10%.

Staying on Schedule and Sustainable With Next-Level BIM 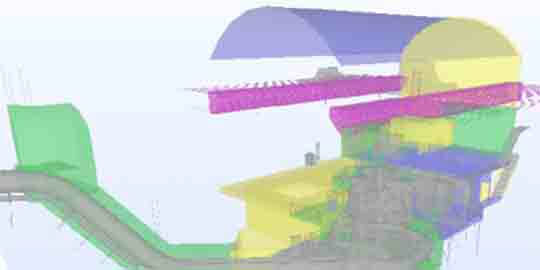 Go inside a hydropower plant being built without conventional 2D drawings.
Read More

Go inside a hydropower plant being built without conventional 2D drawings.
Read More

In June 2020, the South Korean government announced it would pursue the Korean New Deal. From the crisis of the pandemic, the government aims to kick-start digital and eco-friendly economic growth while creating smart cities and generating jobs—with a goal of investing $144 billion and creating more than 1.9 million jobs by 2025.

Going forward, SK E&C will continue its smart-construction practices through digitalization and technology advancement. The company intends to respond to the Korean government’s Green New Deal and policies that foster new energy industries through localization of fuel cells while finding ways to meet social demands with power. By adopting these new practices, SK E&C is taking meaningful steps to solidify its position as a leading construction company pioneering the innovation of performance models in the domestic and overseas markets.