Think about a typical lab. What comes to mind? Likely rows of beakers, whirring machines, and scientists in white coats moving around a sterile environment, testing and retesting their work. NEST (Next Evolution in Sustainable Building Technologies), located on the Swiss Federal Laboratories for Materials Science and Technology campus in Zurich, is different: It looks like a futuristic residential building, but the entire building is actually a research platform for testing construction materials and practices.

“NEST is effectively a lab that’s been turned inside out,” says Zurich-based architect Fabio Gramazio. “The experiments take place on the outside, and the facade, which gives the structure its identity, is on the inside.”

At the modular research and innovation hub, new residential, office, and research units are constantly being installed and replaced, so the building—or at least its outer shell—is constantly changing. Throughout the process, the building’s core—which features an atrium, shared spaces, and an advanced prototypical energy and water system in the basement—remains constant.

A quick glance at the apartment buzzers reveals that NEST is more than just a lab. There’s a list of real names: the academics who reside in the building. “What makes our research here so special is that it’s conducted under real conditions and not in isolation,” says Reto Largo, managing director of NEST.

Largo comes from an IT background, and his father was a building contractor, so he’s familiar with both construction and digitalization and is committed to coordinating research with industry involvement. NEST works with 160 partners, including the Autodesk Foundation and Autodesk Research. “The financial risk for our partner companies is much lower than if they were to try out new technologies in the real economy,” he explains.

Russell Loveridge, managing director of the Swiss National Center of Competence in Research (NCCR) Digital Fabrication, also embraces this collaborative approach. “If we’re going to meet the challenges of the digital future, we can’t have any more silos in construction,” he says. “We’ve got to design across disciplines and work together.”

This is what NCCR Digital Fabrication—which is one of the world’s largest research initiatives for innovative construction—hopes to achieve with NEST. The center built NEST’s DFAB (short for digital fabrication) HOUSE residential unit with more than 30 partners and engaged researchers from eight departments at the Swiss Federal Institute of Technology (ETH) in Zurich, including architects, robotics specialists, materials scientists, structural engineers, and sustainability experts. 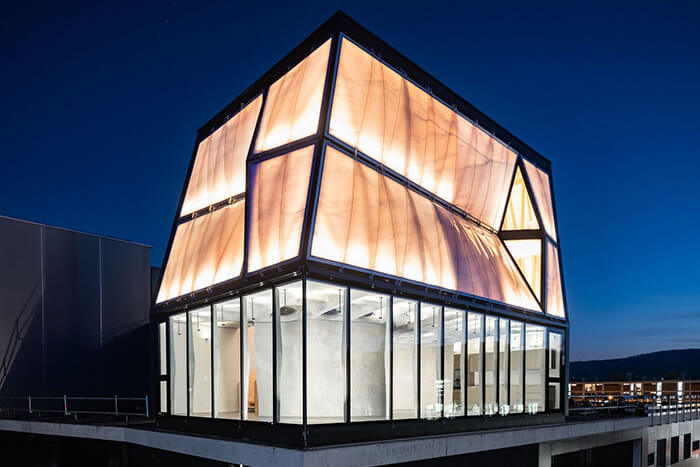 The DFAB HOUSE has a translucent, insulating facade. Courtesy of Roman Keller. 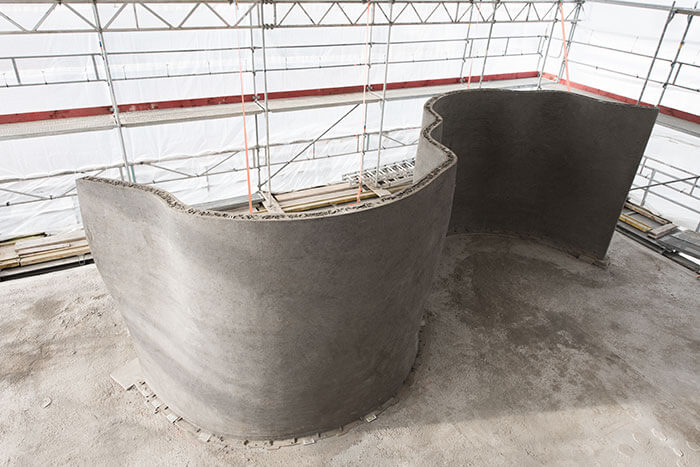 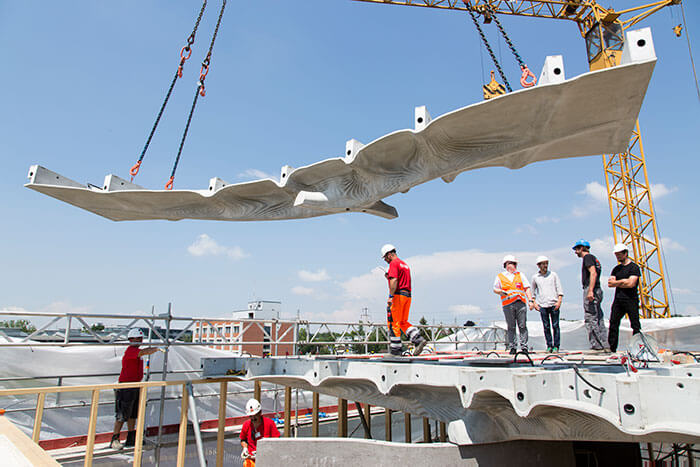 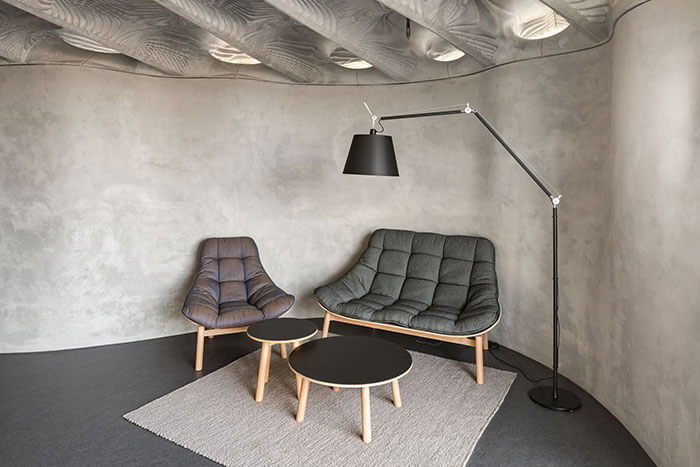 DFAB HOUSE, which opened in early 2019, embodies the future of housing construction. Planning and most of the construction process took place in the digital realm. Robots prefabricated nonstandard wooden elements, which were then assembled on-site. A 3D printer produced the formwork for the elegant concrete slab will serve as the first-floor ceiling, while an on-site mobile robot constructed the reinforcing mesh for a doubly-curved, formwork-free concrete wall. 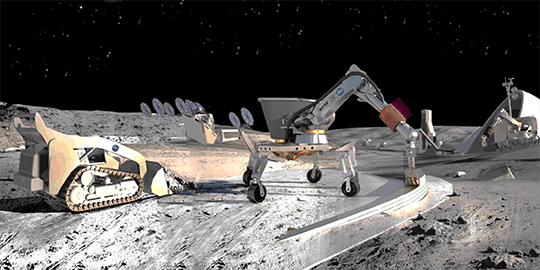 Now that it has been completed, the DFAB HOUSE serves as apartments for visiting researchers and a test laboratory for smart-home solutions and Internet of Things (IoT) technologies. Everything in the unit is networked, from the appliances to the lighting. To save energy, heat in wastewater is recovered directly in the shower trays via heat exchangers. When not in use, warm water flows back into the boiler instead of cooling in pipes. This process eliminates the need to maintain a high water temperature, saving energy and preventing bacterial growth. 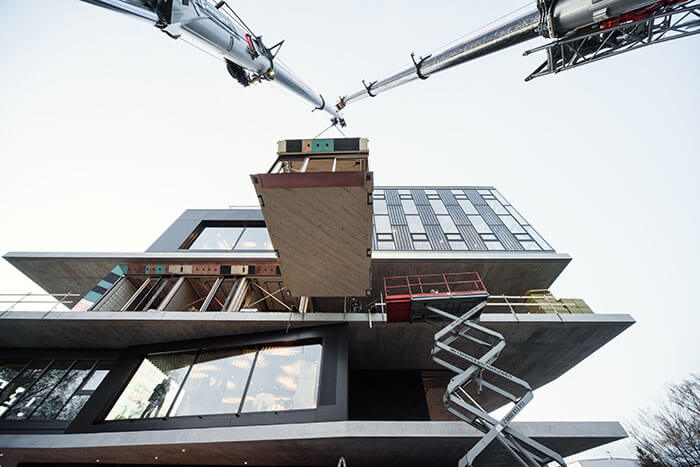 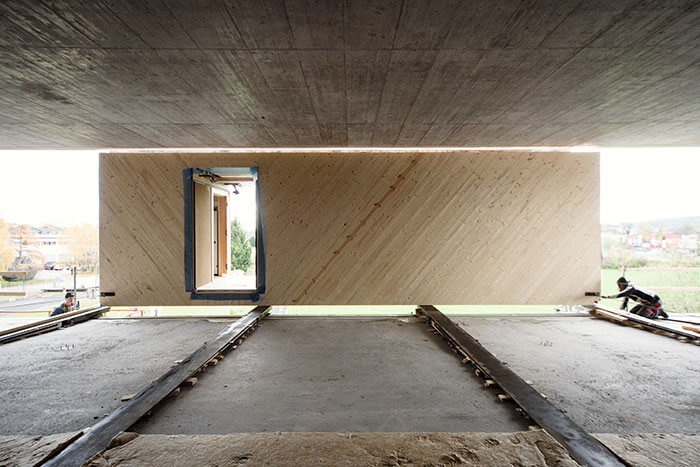 Nothing is glued or coated, so materials can eventually be returned to the building cycle. Courtesy of Wojciech Zawarski.

The DFAB HOUSE is one of six units that are currently installed in NEST. Another is the Urban Mining & Recycling unit, designed under the direction of architect Werner Sobek. Nothing built into this unit is glued or coated, so materials can eventually be recycled or composted as part of the building-material cycle. By following this principle, the team hopes to find new ways to conserve scarce raw materials while researching new joining technologies.

Currently under construction and slated for completion in 2020, the HiLo unit is a high-performance, low-energy house intended to demonstrate the potential for lightweight construction. Renderings show a roof design that will lie on the unit like a suspended cloth—a self-supporting funicular shell made from concrete. The structure of the roof itself rises to a point and will measure just 1.18 inches thick at its peak. An innovative, material-efficient falsework system using a tensioned steel cable net and a fabric membrane provides the form for the pouring of liquid concrete. The roof will have three layers: an exterior of thin-film photovoltaic cells, a mid-layer of insulation, and a layer of exposed concrete.

“We were innovative even with the floor-slab elements,” says professor Philippe Block, who is supervising the project. “The design geometry is such that they don’t require internal tensile reinforcement, so they’re 60% lighter than conventional concrete slabs.”

An adaptive solar facade with self-aligning solar modules will be installed on HiLo’s exterior. The modules can either follow the course of the sun to generate energy and provide shade, or they can open up views by folding away from the facade at their maximum angle. Each panel functions independently.

This facade is the work of professor Arno Schlüter. While developing the panels with his research team, doctoral student Prageeth Jayathissa asked, “If the environment is constantly changing, why is the architecture of buildings so static?” The team ran with this prompt, using software programs to assist flexible, agile design and construction.

The solar facade exists as a digital model in Autodesk Fusion 360, and the entire NEST building was laser scanned by the Swiss company BIM Facility using Autodesk ReCap, creating digital twins in Autodesk Revit and BIM 360. Approximately 3,000 sensors on the building provide facility-management data such as temperature and air quality, which is transmitted to the Revit model via the Autodesk Forge platform.

This data will be used to optimize building management to ensure a successful launch for NEST—and satisfaction for its test residents. The project’s proponents hope that in the future, buildings and the technologies that run them will have longer shelf lives, Gramazio says. “If you offer the necessary flexibility, if you embrace the unknown instead of defining everything, perhaps it will also be possible to construct buildings that are made to last longer again.”