In East London, The Trampery on the Gantry is doubling down on the “creative” aspect of creative reuse. Part of the massive broadcast center used during the 2012 Olympic Games, the former HVAC gantry structure has been retrofitted by architecture firm Hawkins\Brown as an arts and media innovation hub.

The gantry on the rear of the former media center (which contained studios during the Games) held three stories of HVAC equipment but was earmarked to be demolished when its current incarnation required less cooling. Hawkins/Brown, however, knew it had a great structure on its hands. “It was almost a ready-made ‘cabinet,’” says project architect Andrew Hills. “That’s what we saw the gantry structure as. It’s a shelf to put interesting and exciting objects on.”

This idea became the conceptual framework for the project’s design: The gantry would become a Victorian “cabinet of curiosities,” which the firm modeled with collaged images of steam engines, an airplane, and an old-timey metronome. Images of a toy bird, a toy camera, an RV trailer, a Ferris wheel, and a red tin robot added exuberant juxtaposition.

This same sense of fun and experimentation is on display in the actual structure, which houses 21 studios for artists and creative businesses. The steel structure is divided into 26-by-26-foot bays, one for each studio space, arranged in a checkerboard pattern to balance their weight in the cantilevered structure. Two-story studios at the rear offer more muted facades; one-story units in the front are more flamboyant, adorned in artificial grass and shimmering polycarbonate panels. Textures and geometries are postmodern and antic, inspired by the inside-out structural expression of the Centre Georges Pompidou museum in Paris, France.

The gantry is located in a former industrial district called Hackney Wick now colonized by artists and creatives. The studio designs acknowledge the area’s history of making; each facade pays homage to the factories and workshops that kept this part of East London humming before industrial production was largely outsourced.

One artist pod is decorated in the signature pinstripe candy packaging of local confectioner Clarnico. The site was once a dumping ground for discarded refrigerators stacked high into the sky, and one facade evokes that motley assemblage with an off-kilter pattern of white panels. Baltic immigrants in the early 20th century perfected a salmon-curing method nearby known as the “London Cure,” and one studio is sheathed in a warm, translucent orange reminiscent of the fish’s flesh. (Still in operation today, the H. Forman & Son factory cures salmon just a few hundred feet away.)

The studios are offered at below-market rates, and 80 percent of units are offered to local creative businesses, says Cris Robertson of The Trampery, the social enterprise that will manage the “vertical village of sustainable studios.” Subsidies are through the government’s Section 106 agreement, which diverts money from developers working to get new projects built and invests it into community-focused projects such as public art or park spaces.

“At a time when less-traditional space is becoming available and rising rent is pushing out creatives, this demonstrates how innovative architectural techniques can bring previously unused spaces to life,” Robertson says.

The studios’ building method is also critical to its modest fees and overall execution. These maker spaces were all built with the WikiHouse platform, which is a crowdsourced, free set of drawings, renderings, and details that show how to build a single-family-home-scaled structure without skilled labor or specialized tools beyond a CNC mill—all for only $48,000.

While WikiHouse currently offers one design template, the platform provides open-source building technologies—sort of like digital LEGOs—for architects, engineers, and self-builders to create their own designs. For The Trampery, following the WikiHouse plan, plywood sheets are cut into building components with a CNC mill and slotted together with a wedge-and-peg system as wafers fasten perpendicular panels together.

It’s an approach to modular construction that gets by on the most accessible custom fabrication machines imaginable. Instead of 3D printing structural elements with more complex geometry, builders deal only with 2D sheets. Clayton Prest, research and design lead at WikiHouse, likens it to how English musician Elvis Costello “wrote his music to be played on the lowest, cheapest, transistor radio.”

Get the tool that helped transform a gantry into an artist’s paradise.
Read More

Get the tool that helped transform a gantry into an artist’s paradise.
Read More

The Trampery on the Gantry is the largest-scale application of WikiHouse, and variations between each studio were produced using new levels of automation. “Previously, WikiHouse has only ever been a one-off,” Hills says. “And all of a sudden we’re trying to produce 21 different units to be delivered all at the same time.”

Hills manipulated the geometry of each studio by changing parameters in an Excel spreadsheet, which automatically adjusted the cutting patterns for the CNC mill, while a Dynamo Studio script automatically built each WikiHouse chassis in Revit. The algorithm updated the 3D model, and it was ready for assembly. (Each Gantry unit took about 7 to 10 days to build.) This process, Hills says, “gave us way more freedom. That was critical when you’re producing on a mass-production scale. When you’re trying to mass-customize a modular item, you have to have that kind of process in place because otherwise you’ll forever be drawing production files.” 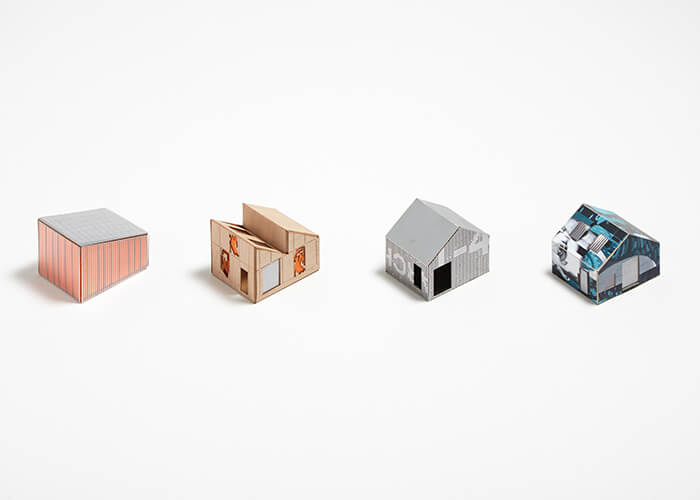 Studios are variations of a WikiHouse design. Courtesy Hawkins\Brown. 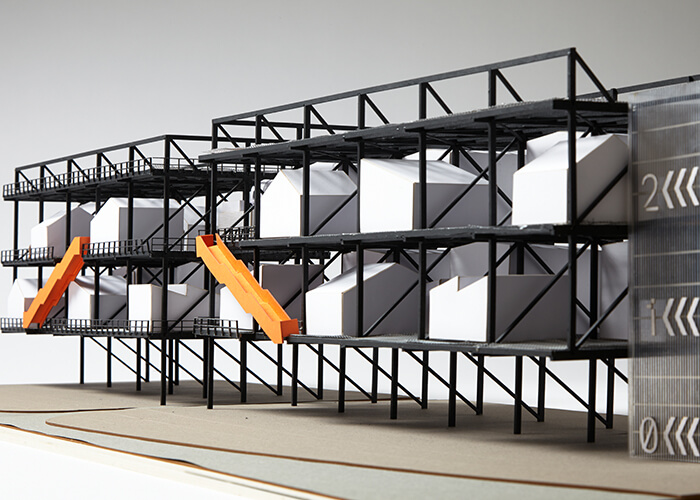 An early model of the gantry structure. Courtesy Hawkins\Brown. 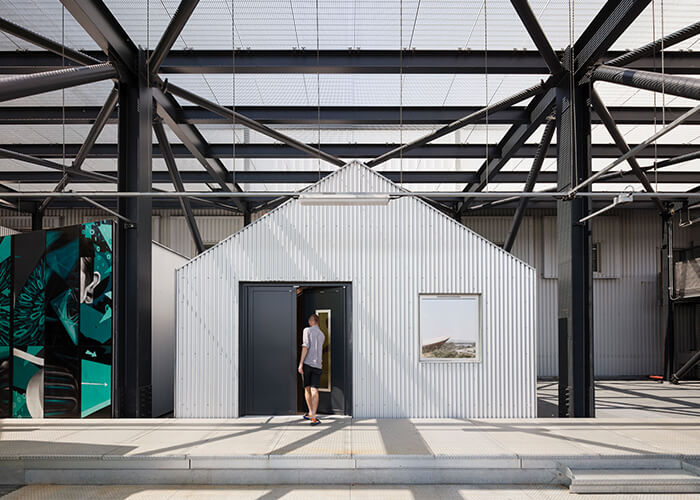 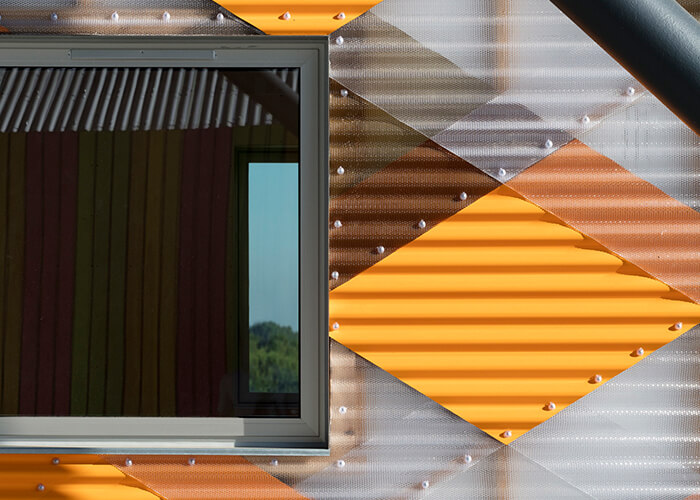 But the WikiHouse model has its limits. For instance, it can be built only three stories tall. For taller wood structures, a stronger material such as cross-laminated timber is required. That’s a possibility for the future, Prest says. “You could have the best of both worlds,” he explains, “getting the strength of the main structure out of cross-laminated timber and carrying that same approach down to a much smaller scale for doing the internal fit-outs and partitions.”

But for now, “the whole system is geared around a domestic scale,” Hills says, which is why The Trampery on the Gantry embraces its spirited familiarity even when it’s surrounded by a high-tech innovation campus. WikiHouse is meant to be engaging, humble, and approachable—aesthetics reflected in the studios’ outward appearance. “Part of the concept of the ‘cabinet of curiosities’ was variety,” Hills says. He and his colleagues spent days manipulating the pitch of each roof in a physical model, moving and arranging patterns across the bays, looking for the most pleasing rhythm of shed roofs, symmetrical and unsymmetrical gables, and dual-pitched roofs.

Similarly, The Trampery on the Gantry’s approach to creative place-making and artistic production is intensely managed and curated. Instead of setting up shop in the old Stratford Jute Mill (constructed in 1864), there’s space in a jute mill–themed studio with metal facade panels that mimic jute’s crosshatch texture. WikiHouse is working on new prototypes that will be entirely demountable and ready for disassembly, opening the door for new chapters of history at the gantry to cycle in and out, and allowing the gantry to document its own history through its modular growth.