The term industrial robotics might conjure huge, fast-moving machines engaged in the kind of repetitive, dangerous work that humans used to handle: building automobiles, welding parts, and so on. Although those machines will certainly continue to take on larger roles in manufacturing, innovations in industrial robotics have started to lead humanity in intriguing new directions.

From delicate industrial-polishing work to picking fruit for breakfast cereals, these industrial-robotics innovations could solve some of society’s most pressing issues—such as labor shortages and worker-safety improvements. But these new ideas and inventions could also help democratize robotics for widespread use, meaning an even faster transition to a new machine age. Here are five examples of innovations in industrial robotics that are transforming how humans work, design, and live.

1. Modbot Is Breaking Down the Barriers to Industrial Robotics

Putting robotics to use in industrial settings takes large amounts of capital—but if robotics startup Modbot has its way, that won’t be the case for long. Modbot seeks to disrupt the field with its democratic approach to robotics, in which modular robots are pieced together with plug-and-play modules that can be reconfigured as users see fit. Although the company has helped giants such as Siemens and Boeing transform their use of industrial robotics, ultimately, Modbot aims to give anyone with a great idea a chance to change the world. Watch the video. 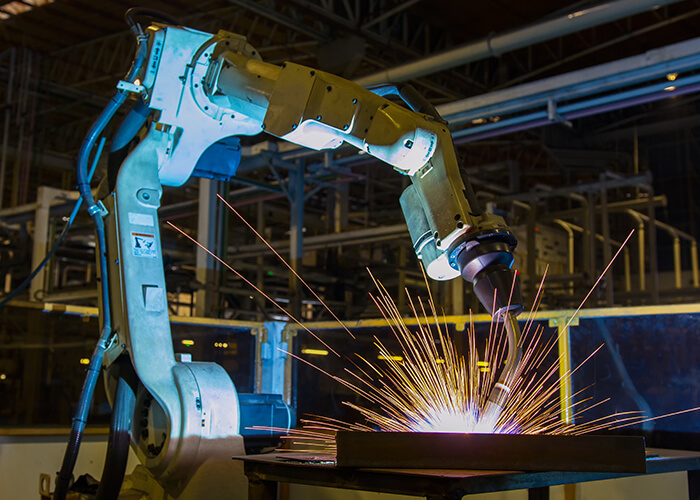 2. Parts Need a Shine and Polish? SYMPLEXITY’s Robots Are Learning to Make the Grade

When it comes to repetitive tasks—such as putting a car together—industrial robotics can make humans seem a bit unnecessary. That’s not the case with industrial polishing, however, which still requires the human touch. Achieving consistent gloss or matte finishes on parts has proven to be a stubborn problem for industrial robots, which is why a European partnership of 15 businesses and academic institutions from six countries has formed SYMPLEXITY, a project that is exploring augmented reality and machine learning to find a solution. Read the article.

3. Will Robots Enable an Architectural Renaissance?

Free-form architectural elements—ones that use complex double curvature shapes such as parabolas—have so far remained outside the purview of industrial robotics. Danish firm Odico aims to change that with its industrial-robotics system that uses a bendable heated blade and foam blocks to create casting molds for domes and other structural elements. That could remove a huge obstacle for architects whose innovative design ideas might otherwise be derailed by tight project budgets. Read the article.

4. The Robot Revolution: The New Age of Manufacturing—Moving Upstream

Japan and China, nations that enthusiastically embrace technological innovations, are finding new ways to use industrial robotics. That includes “cobots”—lightweight, slower robots that safely work right next to humans—which has been shown to increase productivity. And with a rapidly aging population coupled with low birth rates (a trend seen in other industrialized nations), Japan has been experimenting with robots that can staff restaurants and other service industries. If trends persist, your bartender in Tokyo might soon be a robot that always gets your drink right. Watch the video.

5. Labor Terminators: Farming Robots Are About to Take Over Our Farms

As the agriculture market reels from an acute labor shortage—a trend spurred by immigration crackdowns and young workers viewing such work with disdain—growers have begun exploring industrial robotics to tend and harvest crops. Driscoll, a huge player in the American berry market, has already begun testing a farming robot created by Harvest CROO Robotics, and companies in the United Kingdom and Spain have also started to test the waters. As David Slaughter, professor of biological and agricultural engineering at California’s UC Davis says, the need for robotics in farming is “immediate.” Read the article.