X-ray machines can save lives at a doctor’s office, but as it turns out, an industrial X-ray machine can save lives even faster in an airport. “If a suitcase is found at the airport, the police have little time to find out whether or not it contains a bomb,” says Lennart Schulenburg, commercial director at VisiConsult, a family-owned business based near the Northern Germany town of Lübeck. “To avoid closing the terminal, they use our mobile X-ray machines.”

The company also makes large industrial X-ray systems for uses such as finding minute flaws in airplane parts before they pose a threat to public safety. VisiConsult serves the aerospace, oil and gas, automotive, and defense industries by identifying such flaws. Turbine blades, engines, and tubes made from steel, ceramics, carbon, and titanium require verification and damage inspection. Failure to identify any pores and cracks caused by welding, casting, or 3D printing could have fatal consequences.

The business is undergoing a generational handover and investing heavily in the digitalization of processes, artificial intelligence (AI), 3D printing, and sustainable growth. VisiConsult began as a software company in 1996. When founder Hajo Schulenburg recognized market demand for industrial X-ray equipment, VisiConsult shifted its focus to mechanical engineering. 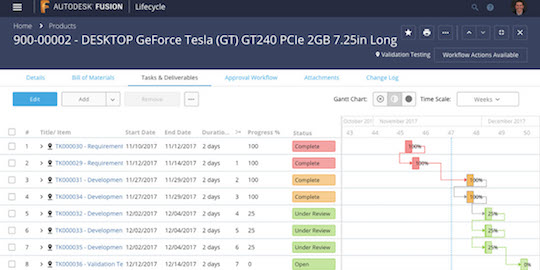 Find out how cloud-based PLM can speed your product development.
Learn More

Focusing on software and Industry 4.0, the company has an in-house design and automation department for adapting systems to customer requirements. New technologies such as AI and cloud connectivity are being tested to further simplify the examination process. VisiConsult has long supplied Automated Defect Recognition (ADR) software, which automatically evaluates X-ray images and is used by several leading manufacturers—many involved in mass production, such as automotive companies.

Companies that produce industrial X-ray machines sometimes receive odd requests. VisiConsult has been commissioned, for example, to X-ray cheese. When a seal broke in the production line of an Irish cheese manufacturer, contaminating the cheese with small plastic parts, it turned to VisiConsult, hoping to save 10 tons of product.

“Cheese and plastic have a similar density,” Schulenburg says. “The fact that cheese also has a large number of air bubbles makes for too much structure, so we were unable to help the cheese producer in this case.”

VisiConsult X-rays 3D-printed products in addition to cast and welded parts. In this area, many additive-manufacturing processes are still not standardized. To prevent important certification decisions being left to scientists and customers, VisiConsult is involved in various committees, including the supervisory board at the Technikzentrum Lübeck (Lübeck Technology Center [TZL]), part of Lübeck University of Applied Sciences (THL). The company also consults with German 3D-printing experts EOS and SLM Solutions.

VisiConsult’s X-ray cabins weigh several tons and use lead to block radiation. They were developed in Autodesk Inventor and can integrate into existing production lines. This process runs fully automatically (often using robots) without having to remove the test specimen from the line or incur time delays.

The VisiConsult mobile X-ray solutions do more than assist with airport security. These devices are also used at sporting events: At the Tour de France, they’re used to check bicycles for hidden electric motors. And in war zones such as Afghanistan, they identify and defuse nail bombs and other explosive devices.

VisiConsult wants to digitalize the CAD data of test specimens and metadata, such as materials and deadlines. “We want to involve the customer as early as possible,” Schulenburg says. For project lifecycle management, the company uses Autodesk Fusion Lifecycle, which controls the information in an automated process, connecting VisiConsult with the customer before the X-ray cabin has even been built.

“This management system allows us to relieve our customers of complexity,” Schulenburg says. “It makes processes clearer and more transparent.” VisiConsult can identify the customer’s requirements very early in the process, ultimately saving time and money.

The company is also exploring generative design, currently with an AI solution to make a C-arm X-ray device lighter. The component is so heavy that vibrations occur during the X-ray process, which can blur the images. To avoid that, the designers redesigned the part using generative design, taking into account manufacturing processes such as 3D printing. 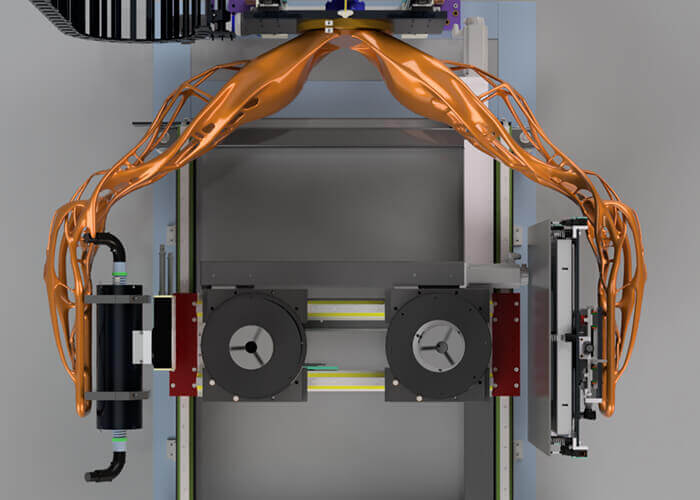 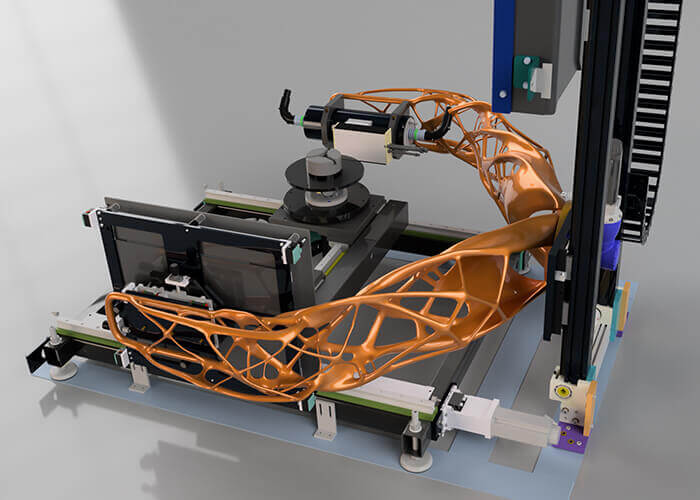 Sustainability is a top priority. VisiConsult built its first office in accordance with the passive house standard in the North German federal state of Schleswig-Holstein long before environmental protection was a fixture of corporate strategy. Rooftop solar cells are installed on the VisiConsult factory buildings, and energy from the server rooms is used to heat the rest of the building.

The company is growing fast and will build a new factory this year, likely using renewable raw materials. “We are very interested in a zero-impact factory,” Schulenburg says. Even the X-ray cabins are recycled at the end of their lifecycle whenever possible, aligning with circular-economy practices.

The German Chamber of Industry and Commerce (IHK) named VisiConsult as a world market leader in the field of industrial X-ray systems. Last year, VisiConsult won the Großer Preis des Mittelstandes (Grand Prize for Medium-Size Enterprises) from the German Federal Ministry for Economic Affairs and Energy (BMWi) for innovation in sustainable growth. 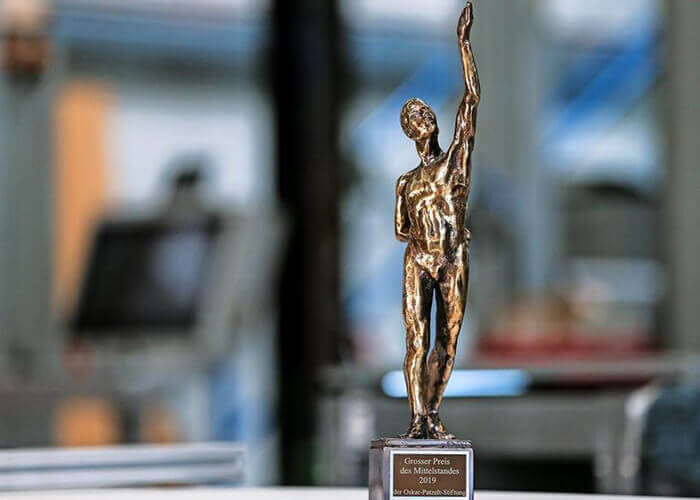 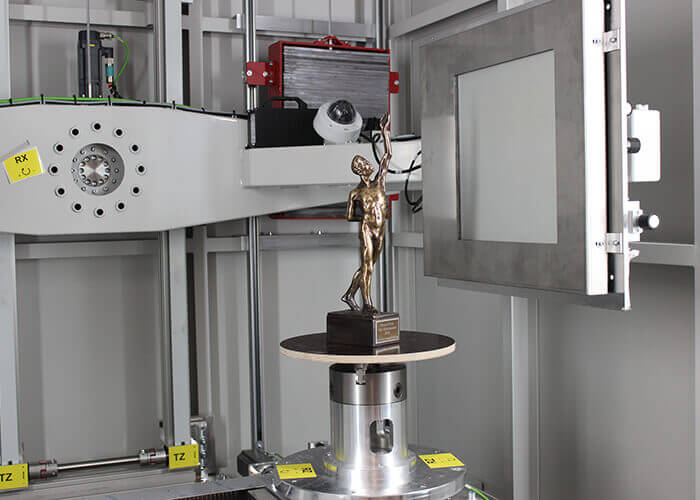 VisiConsult shows what is possible with X-ray technology in the cabin, using the Großer Preis des Mittelstandes trophy as an example. Courtesy of Friederike Voigt.

VisiConsult has more than 100 employees and markets its solutions worldwide. Schulenburg and his wife, Silke, are in the process of handing the company over to their sons: Lennart is the commercial director; Finn is the technical director; and Till is completing a cooperative-education course, combining vocational training in electrical engineering with an apprenticeship as an electronics engineer.

The family regards itself as well-equipped for the future, relying on software solutions to stay competitive. Lennart says Germany’s mechanical-engineering companies must fundamentally change their business model—VisiConsult’s example is to offer test results rather than sell machines. “Customers don’t want an X-ray cabin; they want to know if the specimen is perfect so that it can be certified,” he says. This approach places VisiConsult’s focus firmly on a digital future, or as Lennart says, “Dynamism is in our DNA.”