Nestled within the Edogawa ward of Tokyo is a workshop reviving the Japanese archery bow with a modern twist, code name: Project Sakura. Led by Yoshihisa Nishikawa, president of Nishikawa Seiki Co. Ltd., the quest started with his love of archery and his lifelong goal to develop the ultimate bow. The result is the Nishikawa SH-02 bow riser, which went on sale last year. Now, the challenge is to make the bow even lighter through partnerships that explore generative design with leading researchers.

The SH-02 is designed for archers competing at the highest levels. The riser, which is the middle part of the bow that includes the grip, features a special design where the two springboard “limbs” attach to the top and bottom of the riser. This minimizes wobbling when the bow is released, providing a more precise and smooth release; Nishikawa says it embodies “the joy of shooting.”

“Top archers train hard to strengthen their core and tend to favor heavier bows, as they reduce wobbling,” Nishikawa says. But this trend toward heavier bows has been a roadblock to archery gaining wider appeal in Japan. “Newcomers to archery are often frustrated by the weight of the bow, and soon they quit,” he says. “Of course, there are lighter bows out there, too, but they are harder to aim. If we could make a light high-performance bow, weight could be added to the liking of each archer. I felt this was the sensible approach to our work.”

Nishikawa Seiki is a metalworking company that fabricates a broad range of products, from simple machine parts to special-order medical research systems. It also produces socially conscious goods such as ultracompact mobility vehicles. For this project, Nishikawa turned to his colleague Toshihiro Irie, a professor in the Department of Precision Machinery Engineering at Nihon University College of Science and Technology. Together, they wanted to find methods to lighten the bow riser while maintaining its rigidity.

Topology optimization is one approach to lightweighting a product by eliminating areas within a part that are not stress-bearing. Generative design takes this idea further. “We are surrounded by preconceived notions about what makes something efficient or a good design,” Irie says. “Generative design can strip away these obstacles to reveal a purer form. I saw how some of my students working on the space elevator project used generative design to create parts, and I was fascinated by the process. When I showed this to the team at Nishikawa Seiki, they were equally impressed.”

The team used the results of 3D position measurement to observe the movement of the bow string and then analyzed that data to derive equations for the load applied by each shot. The riser Irie’s students created using generative design in Autodesk Fusion 360 is notable for its asymmetric shape. “Within the generative design process, it becomes a problem if the top and bottom of the riser have different lengths from its center,” Irie says. “If you look at the final product, you can see how this factored into our design.”

In archery, the vibration created once the string is released affects the steadiness of the grip, which determines aim and relates to the rigidity of each part of the bow. Irie’s team used this data when creating various patterns of load, repeating simulations as they looked for a shape that would satisfy all the requirements.

Nishikawa says the new bow riser is “totally different from the SH-02 in terms of our design approach, but it incorporates numerical data and concepts from our earlier work. Our team could not have possibly come up with this incredible shape by themselves.”

Through the generative design process, a 1,531-gram riser was lightweighted to 633 grams. The overall weight of the riser was reduced by over 50%, and adjustments allowed limbs and other accessories to be attached. After the design was finalized, the complex shape was fabricated using DMG Mori Seiki’s NTX1000 second-generation 5-axis integrated milling machine.

Ryusuke Haruta, a research student at Nihon University’s College of Science and Technology, handled the CAM operation. “I was able to see for myself how various factors in a manufacturing process influenced the final part,” Haruta says. “And we were able to attain sufficient rigidity.” Veteran operators at Nishikawa Seiki then converted the data, verified the process, and successfully fabricated the detailed part on their first attempt.

The team had been running simulations, and Nishikawa says that as a smaller company, it could fabricate the part quickly to perform actual tests. “Nothing compares to holding the actual part in your hand, seeing how it performs, and being able to test it for flexure or warping,” he says. “I’m amazed that we were able to get such data out of our first try with this technology.”

The vibration measurement for the SH-02 had results equal to the best available models. When the Nishikawa team put the generative-design riser to the same test, horizontal vibration was slightly greater than that of the SH-02, but vertical vibration was less. 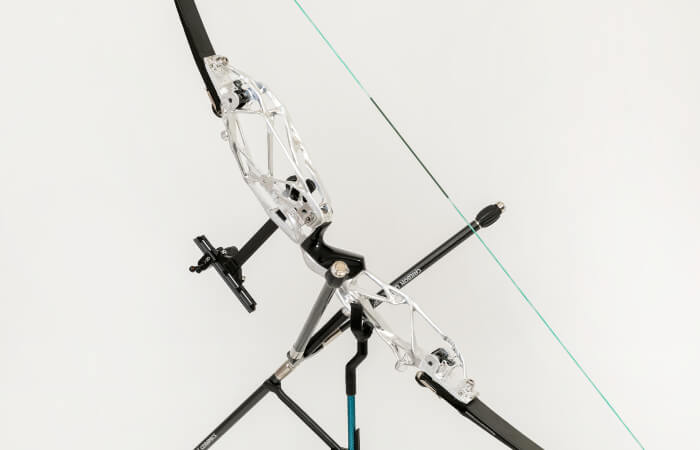 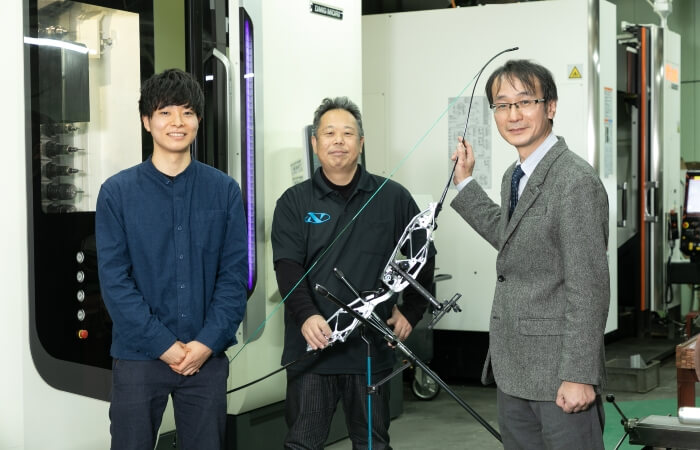 Looking at the test data, Nishikawa says the team has already identified some points for improvement. The next step will be applying this data toward an even better design, making the riser even lighter while improving its rigidity. “Looking down the road, we hope to use generative design to make recurve bows that can be used in Olympic competition—and compound bows, as well,” he says.

Nishikawa sees a unique opportunity in the bow market for a smaller company to succeed. “To large Japanese corporations, the archery market is just a drop in the ocean, but for a small company like us, it’s like a vast body of water we can set sail into and discover new lands,” he says.

The domestic Japanese market numbers in the thousands, but millions of people worldwide enjoy archery. Nishikawa is developing a business strategy to expand into this global market space. “The mere fact that a Japanese company is reentering the archery market will stand out at overseas trade shows,” he says. “And the Made in Japan brand has undeniable clout that will help us succeed.”