Winters in windswept northern Sweden are cold and dark, with Arctic storms posing a constant challenge to daily life. Below the earth’s surface, however, lies a highly sought-after resource: one of the world’s purest iron ore reserves.

These rich reserves are the reason Sweden’s state-owned mining company, LKAB, founded the country’s northernmost city of Kiruna in 1900. Kiruna has since become the site of the world’s largest underground iron ore mine: Today, LKAB’s mines provide almost 90% of the iron ore produced in Europe, enough to produce six Eiffel Towers every day. Two-thirds of the town’s residents are dependent on the mining industry.

The problem was brought to light in 2004, when LKAB informed the local government that a half-century of mining operations had undermined the structural integrity of the earth below the town, with fissures opening throughout the area. According to LKAB’s forecast, the entire city center and many of its vital functions would become unserviceable within 20 years. The company needed to continue expanding the mine in order to continue operations, but it worried that digging deeper would further complicate the problem.

Rather than close the mine, a critical job source for the local population, the municipality began years of work on Kiruna C: a new, comprehensive plan to not only save the existing town of Kiruna but also redesign it. As part of this ambitious plan, 31 historic buildings and thousands of residents are being relocated, all while weathering the harsh Arctic climate.

Preserving a Sense of Place

Planners decided that, to save the city, buildings and residents would need to shift roughly 2 miles east. This relocation plan presented a unique opportunity to rebuild a new town center for Kiruna’s residents.

In 2012, the municipality invited 10 teams of architects to take part in a competition to create their visions for the area. The brief was to produce a more vibrant, sustainable urban hub that would also preserve the city’s history and social identity.

Swedish architecture firm White Arkitekter ultimately came up with the most convincing concept, winning the contract to create its Kiruna of Tomorrow by 2033.

“It was important to have a social anthropologist on our team to act as an intermediary between the residents and architects—someone who is there to ensure that the people can have their say,” says Krister Lindstedt, head architect for the Kiruna project. White Arkitekter considers itself a company characterized by “civic engagement, social responsibility, active participation, and a democratic outlook” and describes the relocation of Kiruna as “one of the largest urban transformations of our time.”

Many of the of the city’s residents see the project as an opportunity to start anew, with a full 80% supporting the relocation. Public spaces including a library, swimming pool, and town square are being built with the goal of attracting more tourism to the city, which will make Kiruna less economically dependent on a finite natural resource. “The goal is to create a city center that brings together the residents of Kiruna and connects them to their Arctic surroundings,” Lindstedt says. 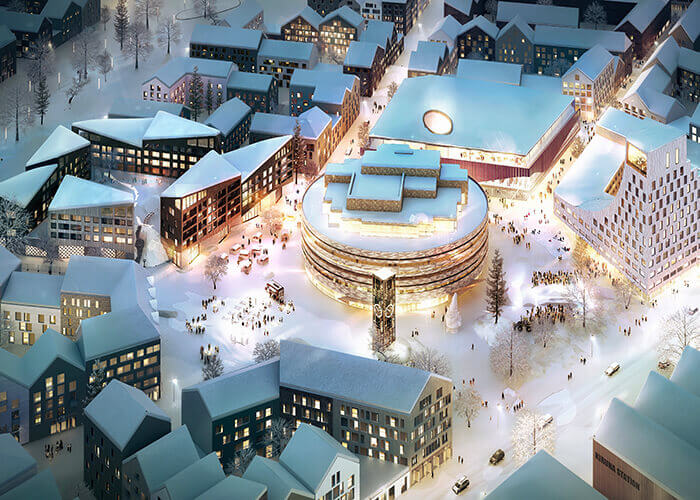 Kiruna will have a new city center, with its new round city hall in the middle. The clock tower from the old city hall was erected directly next to it. Courtesy of White Arkitekter. 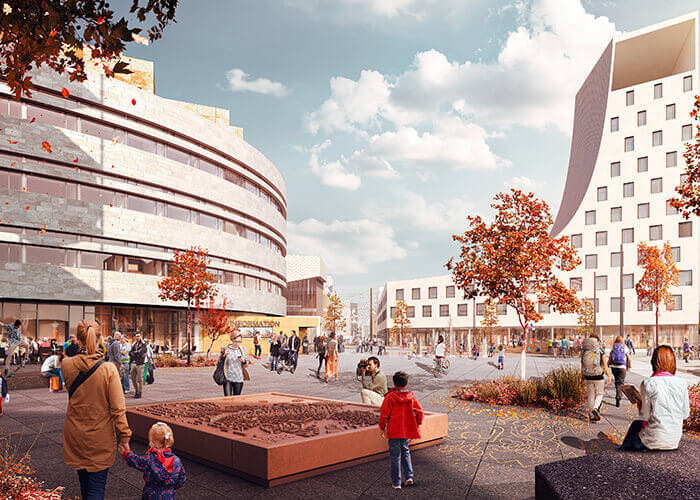 The Crystal, the new city hall designed by the Danish architecture firm Henning Larsen, has already been completed. Courtesy of White Arkitekter. 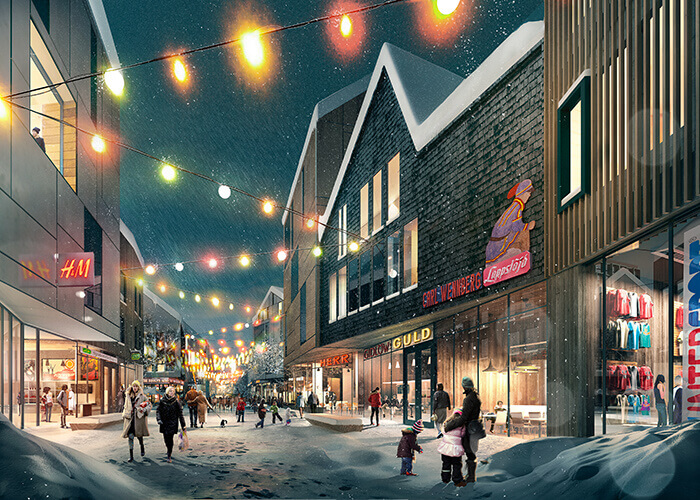 White Arkitekter’s entire architecture project is in the cloud. The architects used the Autodesk solutions Revit, AutoCAD, and CFD to design the new city center. Courtesy of White Arkitekter. 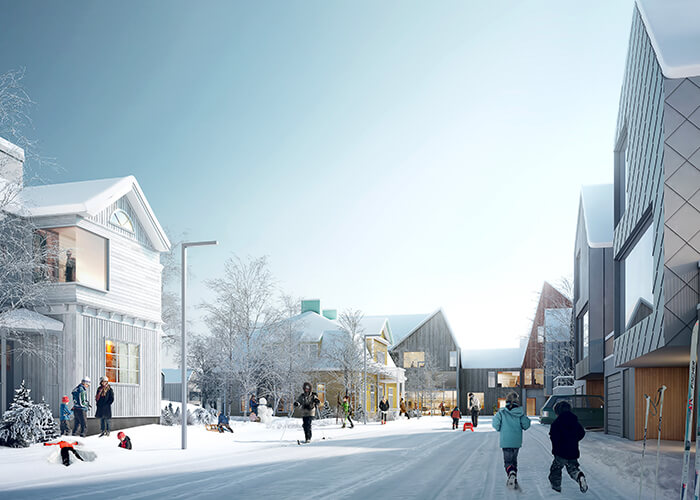 The “new” Kiruna will be livelier and seeks to be more attractive to tourists. Many of the Kiruna’s residents see the move as a chance for their city. Courtesy of White Arkitekter. 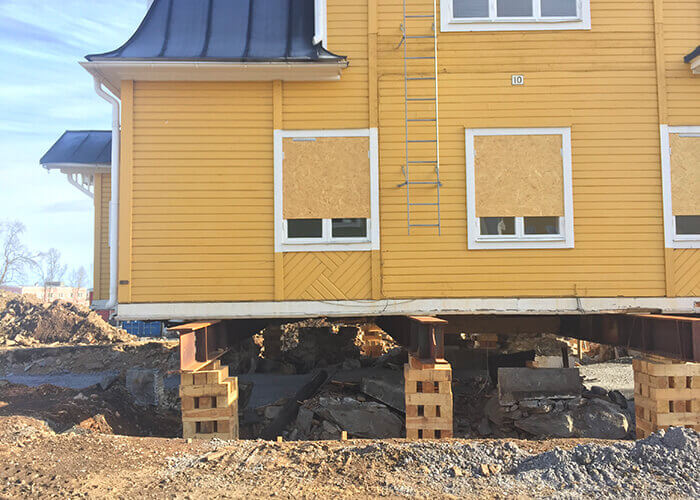 After the foundation has been removed, the wooden structure stands on long steel beams. The building is then loaded onto a truck to be moved to its new location. Courtesy of Sam Keshevarz/White Arkitekter.

Optimizing Architecture for a Harsh Climate

The climate also played an important role when planning the new central district. The city’s location 90 miles inside the Arctic Circle means that its residents will live in perpetual daylight from May to August and in total darkness from December to late January. Temperatures can plummet to 5°F (–22°C).

Because of these weather extremes, buildings will be positioned to receive the maximum amount of sunlight during the summer, when the sun is low on the horizon. Another goal is to minimize the effect of the strong Arctic gusts: Each building is oriented to ensure that Kiruna will not “whistle” in the wind.

“We used Autodesk CFD to simulate the movements of the wind and sun, as the software works with computational fluid dynamics,” Lindstedt says. White Arkitekter then used the results of the simulations to position the buildings to receive maximum sunlight.

Parts of the new city center have already been completed. Trucks and cranes were used to relocate several existing wooden structures, such as the old city hall’s clock tower. Kiruna Church, one of Sweden’s most iconic landmarks, has been taken apart and then rebuilt in its new location, piece by piece. 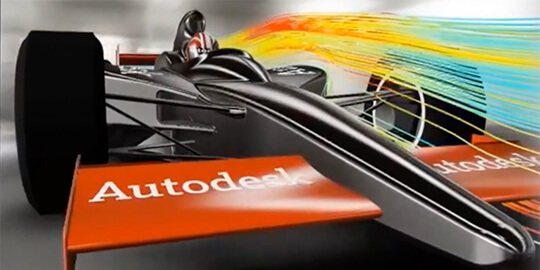 Need to intelligently predict how fluids and gases will perform?
Check Out CFD

Design and optimize systems with fluid, thermal, and motion insights.
Get CFD

Sustainability is a key priority of the relocation project. One landmark that isn’t moving is old city hall; high costs made it unfeasible to include it in the move. Instead, parts of the building are currently on display at ArkDes, Sweden’s national center for architecture and design, and will be reused in the construction of newer buildings in the city.

In addition to recycling materials, the city aims to take advantage of the enormous amount of waste heat created during mining activities. Wind turbines will be constructed to generate electricity from the strong Arctic winds.

“The relocation of the city will be completed by the early 2030s,” says Lindstedt. He believes that instead of disappearing altogether, Kiruna will experience an unprecedented upswing.

In the coming years, numerous coastal cities will likely face similar threats to those faced by Kiruna. As rising sea levels force many people to seek new places to live, this Swedish city’s story could help model a better future.