According to a 2018 report by the International Energy Agency and UN Environment, the global construction industry is responsible for 39% of energy-related carbon-dioxide emissions. That is a huge, scary number—but one that comes with an equally large opportunity to mitigate climate change. The 2015 Paris climate talks revealed that by using existing technology, construction could cut global carbon emissions by up to a third.

Such a reduction requires finding a new way for the industry to move forward, or as CEO and chief architect of New York–based AI SpaceFactory David Malott puts it, “a high-tech way of going backward.”

As a member of the Autodesk Technology Center residency program in Boston, AI SpaceFactory is pursuing a new path for construction practices that are kinder and gentler to the earth. But the company’s vision for the future of building started with a robot-built habitat for another planet: Mars. 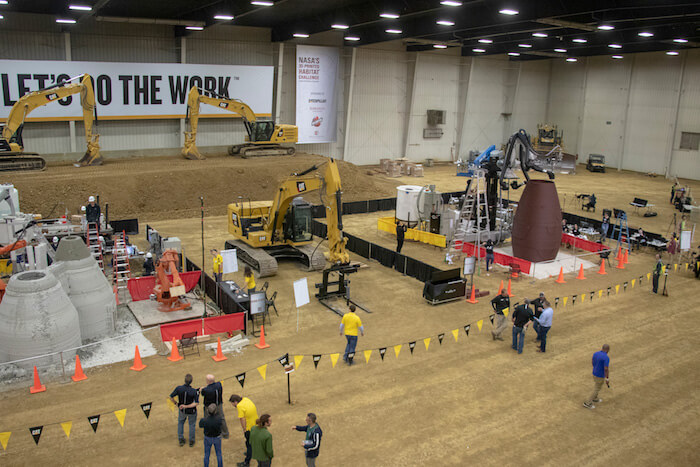 AI SpaceFactory won the NASA 3D-Printed Habitat Challenge. Shown is the Marsha habitat under construction at the event venue. Courtesy of AI SpaceFactory. 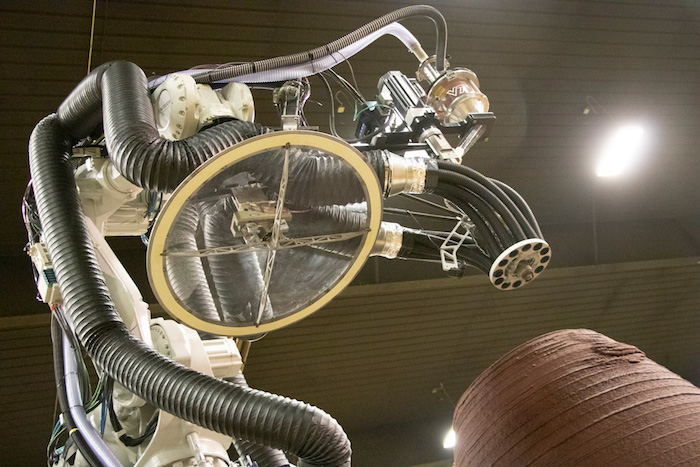 Marsha’s skylight being attached at the NASA event. Courtesy of AI SpaceFactory. 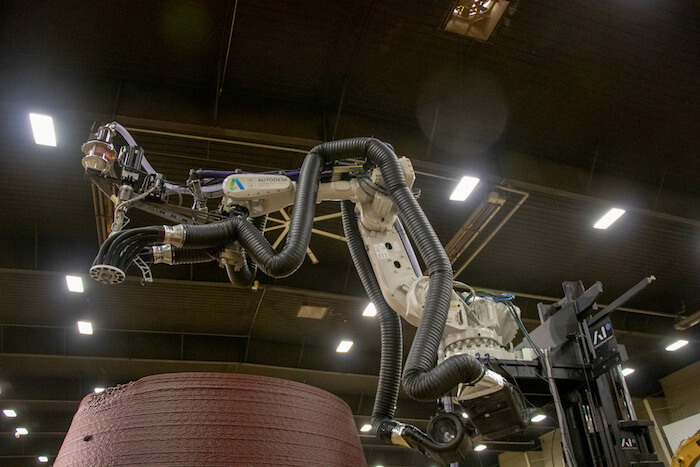 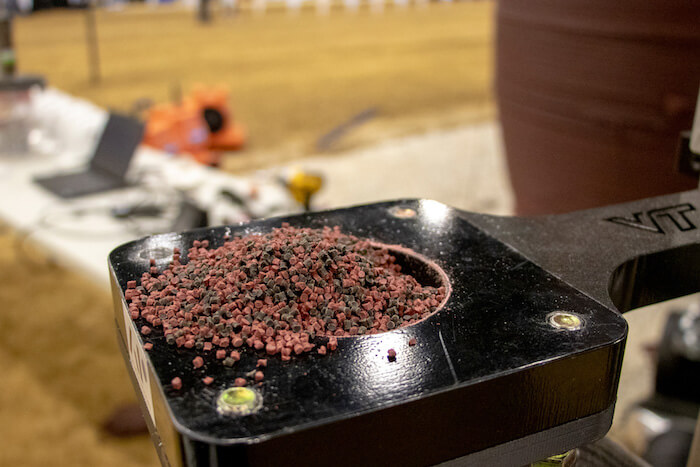 Material pellets such as these could be sourced from the dirt local to the project site. Courtesy of AI SpaceFactory.

Robotic Construction Paves the Way for a Habitable Mars

Marsha operates on the principles of autonomy and hyperlocalization. It is constructed with available materials from wherever the extraplanetary lander touches down, prefabbing habitats in advance of the human crew. With its construction engineers more than 34 million miles away—too far to tighten a bolt—the project has to be completely self-driven.

With both NASA and the Chinese government setting goals for sending people to Mars by 2033, the need for a Mars habitat is growing. Building for Mars was a thrilling first step, but the next iteration stays earthbound. Called Tera, AI SpaceFactory’s terrestrial 3D-printed habitat also uses autonomous construction but focuses on alternatives to environmentally damaging building methods on earth.

“Concrete and steel are very unsustainable building materials,” Malott says. “They take a lot of energy to produce, and concrete isn’t recyclable.”

Tera is also meant to show how much cleaner, faster, and cheaper construction can be. Malott points out that energy-intensive materials are produced and shipped around the world, which obscures the true—and much higher—environmental cost.

“Before the 20th century, building materials were sourced nearby,” he says. “The whole premise of building on Mars was going back to building in situ. It’s high tech, but it’s also Stone Age technology at the same time. We use materials harvested close to the site. If we can do that here on earth—go to a site, take a limited amount of equipment, and essentially build with the dirt we find there—nothing is more sustainable than that.”

The hypothetical Mars use case was great training for in situ building because transporting equipment and material is the biggest obstacle to overcome. Malott cites a recent study that attached a price tag of $1.2 million to every kilogram (2.2 pounds) launched from earth into space. “At that price, it’d be upwards of $3 billion to send a house to the moon,” he says.

Rather than plastic polymers that are used commonly in applications from structural adhesive to waterproofing, Tera will make biopolymers from organic material collected from the surrounding environment, creating an end product entirely at the source. So instead of a petrochemical product with hidden costs like chemical pollution and water waste, the similar biopolymer substitute is made by fermenting plant sugars from corn, sugarcane, or beets found on-site to compose the building blocks.

Its designers made Marsha to be extremely hardy for Mars’s extreme conditions, able to survive freezing temperatures and an almost entirely carbon-dioxide atmosphere. Tera doesn’t need to be nearly as robust; Malott says the basalt fibers for Marsha’s polymers had to be high performance, but it’s overkill to apply the same standards on earth. Using more earth-relevant materials in the short term, such as crushed rock or fiberglass, will help realize the project’s commercial potential.

But right now, the science behind Marsha and Tera is sound; their material has proven to be stronger than concrete in tests. “Wind and seismic load become more of an issue,” Malott says. “It’s weaker in the horizontal direction as opposed to forces pushing down, so we have to develop methods to strengthen that. But once we do that, there’s really no theoretical limit. On earth, you’d build a concrete column or a steel plate thicker to compensate.” 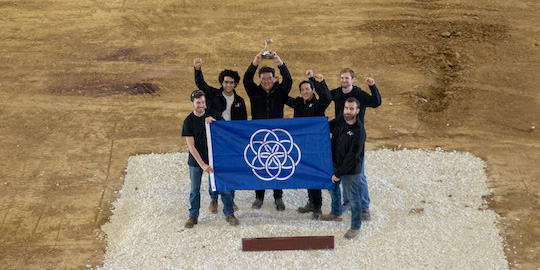 When the Tera team finalizes the project’s physics, it could build almost anything, including multistory buildings. Combined with additive manufacturing, custom machinery such as cranes or drones to 3D print from the appropriate heights would literally make the sky the limit.

Sustainable Prefabrication Could Lead the Way for Construction

Marsha and Tera are made with more than 90% autonomous methods, which reduce labor costs to around 15% of the total project—half of the 30% common in traditional building. Malott estimates a two-year timeline to develop a solid business case for scaling Tera, as the company completes the requisite testing, clears industry accreditations, and waits for an established 3D-printed building code. When that happens, the sustainability rewards could appeal broadly and inspire others to change their methodologies. 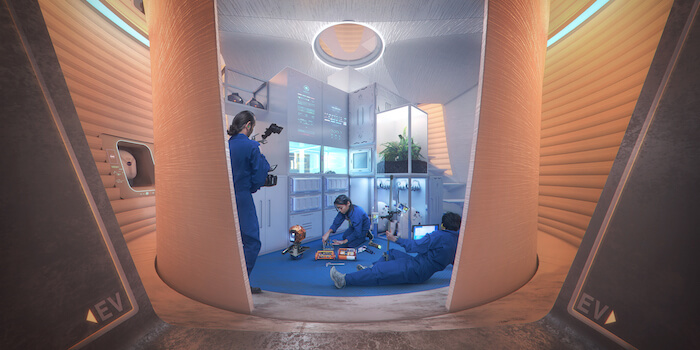 A series of renderings shows some of Marsha’s interior possibilities. Rendering courtesy of AI SpaceFactory and Plomp. 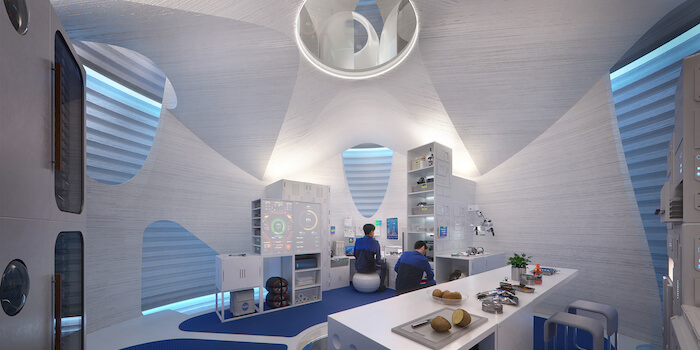 A possible office space on Mars. Rendering courtesy of AI SpaceFactory and Plomp. 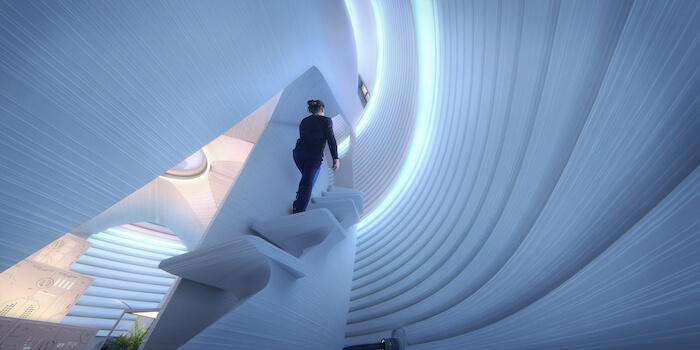 Stairs to the upper level. Rendering courtesy of AI SpaceFactory and Plomp. 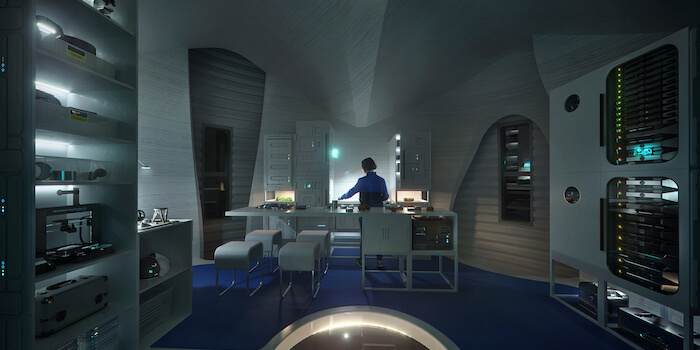 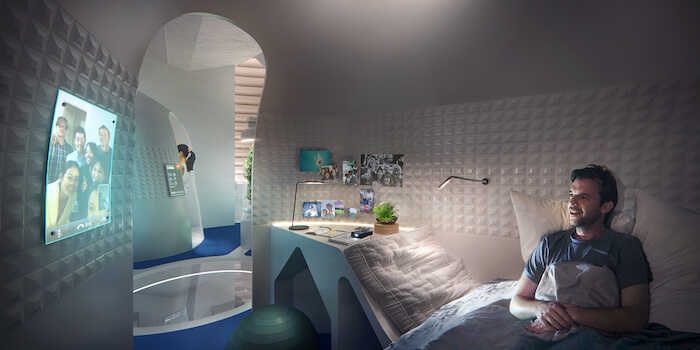 Creating Tera entirely under one proverbial roof makes AI SpaceFactory’s process even more sustainable, Malott says. “We’re unique in that we do both the design and the 3D-printing technology side of things. Normally, it’s not so vertically integrated like that, and you’d get a designer working together with a 3D-printing partner.

“When we’re talking about a new industry like this, one company’s methods can change peoples’ perception of what it can be,” Malott continues. “With Tera, we’re trying to educate people about the sources of the problem. Electric-car makers have done a very good job explaining why gas cars are bad. We need to start sending a similar message about buildings.”

When will AI SpaceFactory know that message has been heard? Malott offers a unique benchmark: when it starts upsetting “Big Concrete.”

“The measure of our success is when the concrete industry tries to make people skeptical about what we’re doing,” he says. “That will be when we’ve caught their attention and when we’re making them a bit nervous.”

This article has been updated. It was originally published in July 2019.