Addressing the basic needs of the poorest people in the world is a daunting mission, but San Francisco–based Mulago Foundation has developed a simple algorithm that makes it significantly easier.

The philanthropic venture fund, led by managing director Kevin Starr, provides grants and low-interest loans to organizations that demonstrate an ability to transform impoverished communities. Think of it as a Shark Tank for socially minded entrepreneurs and nonprofits.

Mulago has funded several successful food and energy ventures in recent years, including the Rwandan social benefit firm Inyenyeri. By leasing clean, efficient Mimi Moto cookstoves to Rwandan customers at no cost and selling compressed-wood fuel pellets to families at roughly $14 per month, Inyenyeri reduces household air pollution by about 90% for a range of deadly contaminants, while also slashing carbon-dioxide emissions up to eight tons per household per year.

Here, Starr reveals four questions product developers interested in social impact should ask themselves to ensure their products are relevant to their customers, will entice investment, and ultimately lead to lasting change.

1. Is the Product Needed?

This question may seem obvious, but as Starr points out in a 2010 PopTech talk, technology products billed as “world saving” often ignore the social and economic realities of the poorest people. Though clean cookstoves can be expensive, they fill an urgent need. Whether living in a thatched-roofed hut or in an urban apartment, exposure to air pollution from charcoal-burning cookstoves and wood fires puts people at risk for chronic illnesses and acute health problems, including emphysema, lung cancer, bronchitis, and cardiovascular disease.

“Household air pollution kills more people in Rwanda than tuberculosis, malaria, and AIDS combined,” says Tom Price, director of strategic initiatives at Inyenyeri. “Being in a room with an open fire is like being in a room with someone smoking several hundred cigarettes per day.”

2. Does the Product Work?

Until recently, Starr says, most cookstoves marketed as “clean” did not burn cleanly enough to prevent users from breathing dangerous levels of unhealthy air. (Inyenyeri says that for cookstoves to meet this need, they must reduce air pollution by around 90%.) Natural-gas ranges were too expensive for most Rwandan families to afford. “People don’t want to spend more than 12 to 20 dollars for a stove, and a good stove—the kind that reduces indoor air pollution by 80 to 90%—costs upward of 50 dollars,” Starr says.

The cookstove used by Inyenyeri appears to be more than clean enough. An April 2019 study by North Carolina State University researchers published in the journal Environmental Science Technology found that the Inyenyeri system reduces fine particulate matter (PM 2.5) emissions—tiny solids that can be hazardous to the respiratory tract and lungs—by 97% compared to wood fires and 89% compared to charcoal cookstoves.

And Starr says the Mimi Moto stove, a small cylindrical chamber that converts biomass feedstock (for example, small eucalyptus trees and branches, elephant grass, sawdust) to gas, has other advantages. It’s easy to move, it can be easily calibrated to a desired temperature, and a built-in fan provides ventilation. If customers want to achieve a low simmer for a soup, they can do that intuitively and with ease.

3. Does the Product Get to the People Who Need It the Most?

The real reason a company like Inyenyeri is a prudent investment, Starr says, is the sustainable revenue and distribution model developed by company founder and CEO Eric Reynolds, who also founded the successful outdoor-equipment company Marmot. “You can’t get people to buy stoves like this in volume, and it turns out it’s really expensive to finance small transactions like these,” Starr says.

The Inyenyeri solution: Give the stoves away for free, so long as customers agree to buy Inyenyeri’s pellet fuel on a recurring basis.

The company remains small, leasing 5,000 stoves to serve an estimated 30,000 people, but with significant financial commitments, it is poised to scale. The preliminary results of a four-year study led by Ashu Handa, a development economist at the University of North Carolina, show that those who (voluntarily) adopt the stove with Inyenyeri have a 25% reduction in their fuel costs. “The financial aspect is very important to adoption,” Handa says. “People don’t think about lung cancer down the road. They think about how the stoves will affect their budget.”

4. Will the People Who Need the Product Use It Correctly?

This final question is paramount, Starr says. Even if a product performs flawlessly and arrives free of charge on the doorstep of those who need it, it will not lead to lasting change unless it is used correctly. A common obstacle to realizing the health and environmental benefits of clean cookstoves is “stove stacking”: the problem of people continuing to use existing charcoal stoves or open fires even after obtaining a clean cookstove.

Inyenyeri has a simple solution: Give people as many stoves as they need to replace their old way of cooking, along with a free lifetime repair-and-replacement guarantee. “By making it as easy as possible to do the right thing, having as many stoves as possible at no upfront cost, it stacks the deck toward using clean stoves,” Starr says. 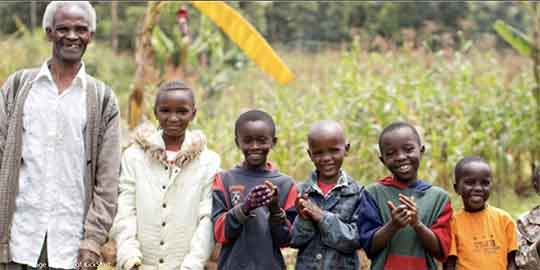 Learn about strategies for investing in solutions that build resilient communities.
Download Report

Learn about strategies for investing in solutions that build resilient communities.
Download Report

Crucially for inclusion, the company’s business model works even for those too poor to buy the fuel. Under a barter system, rural households can trade the company wood in exchange for pellets; because the pellets are so efficient, the customers need to collect only half the wood they would normally need to heat their stoves. This saves rural customers an estimated 30 hours per month, leaving time for other activities.

Inyenyeri tracks all this information meticulously, Price says. “We know whether people are using the stoves and exactly how much they’re using them. We know how many pellets they’re using, how many people live in each household, and how many grams of fuel they use per day. We know that 99% of our customers are buying fuel on a regular basis.

“Every family, everywhere, deserves to have clean air to breathe and a healthy planet to live on,” Price continues. “By changing something as simple as the way they cook, we can improve the lives of our customers, and help address climate change and do it while building a sustainable business. That’s a win for them, a win for us, and a win for our planet.”

#Energy and Natural Resources - #Industrial Design - #Materials - #Product Design
Jeff Link is a graduate of the Iowa Writers' Workshop and an Eddie-nominated journalist. His work has appeared in Landscape Architecture Magazine, gb&d, Redshift, and American Builders Quarterly.
Success! You’re in.
IoT and AI and VR, oh my!
Learn all about it in our newsletter.
By signing up, I acknowledge the Autodesk Privacy Statement.
Manufacturing
Convergence in Manufacturing Is Good for Consumers and the World They Live in
Manufacturing
Technology Is Enabling Vaccine Delivery and Management in Emerging Markets
Manufacturing
History of 3D Printing: It’s Older Than You Think