In the years before his death, the late Marine, astronaut, and US Senator John Glenn had a vision to create a place of gathering and remembrance for veterans of all conflicts. It would not be a traditional war memorial or military museum, but a place that would honor veterans and promote civic discourse, sharing stories of service through interactive exhibits, oral histories, images, and personal artifacts.

Now, that vision has taken form in the National Veterans Memorial and Museum, the centerpiece of a 56-acre, multimillion-dollar master plan in a revitalized district of Columbus, Ohio, spearheaded by the Columbus Downtown Development Corporation (CDDC).

The new national museum was designed by Allied Works Architecture, with OLIN serving as landscape architecture firm and Ralph Appelbaum Associates as exhibition designer. The museum is a stunning achievement: a whopping 28 million pounds of concrete cast into concentric rings that spiral upward from the earth in a single gesture of building and landscape.

The museum aims to anchor a new cultural core for the city, developed alongside the expanded and refurbished COSI (Columbus’ Center of Science and Industry) and a 21-acre, mixed-use neighborhood featuring residential, retail, office, and hotel spaces. This former site of the Franklin County Veterans Memorial will be transformed into a pilgrimage destination for the nearly 21 million living US military veterans, their families, and the public, says Amy Taylor, chief operating officer of the CDDC.

The Evolution of Ideas

Chelsea Grassinger, an associate principal at Allied Works and the project lead for the firm, says that from the start, founding principal Brad Cloepfil and her team wanted “to create a structure that would gently lift the land from this site, forming the processional ramp, culminating in a ceremonial open-air sanctuary, a space for contemplation and memory as well as the end point of the yearly veterans’ parade.”

Laurie Olin, founding partner of OLIN, served in the Army as a company clerk in the 1960s and is the mastermind behind Bryant Park and Columbus Circle in New York City. Olin describes the first time he and Hallie Boyce, partner at OLIN, began their collaboration with the Allied Works team. “We were drawing together one day,” Olin says. “Brad and his team had made a curved gesture, a swoop, lifting the landscape up and around the building. We expanded on that idea and drew an elliptical form that ultimately became the Memorial Grove. We looked at it all together and said, ‘that’s pretty cool.’”

While Olin says they still had to work out a lot of details—how the exhibitions galleries would be arranged and programmed, where the bus would drop off guests—they knew they were onto something with the building’s spiral form, which not only provided structural strength for the building but also suggested the strength of bonds among veterans.

Grassinger says these ideas gradually evolved through “extremely close and iterative” collaboration between digital platforms. “The building form and structural geometry were informed by Olin’s sculpting of the site on all sides, and likewise, the building helped to describe and refine paths as they connect arrival points along Broad street and to the grove,” she says.

A Path Into Protected Spaces

The harmony between the museum’s indoor and outdoor spaces is among its most distinctive qualities. Glass curtain walls allow a view into the permanent exhibition galleries, which hug the curve of the building’s concrete rings. These rings “become more closely knit and opaque as one moves closer inward, creating more intimate and protected spaces through the exhibition experience—a sequence we worked on closely with Ralph Appelbaum and his team,” Grassinger says.

Interior exhibits focus largely on the narrative journeys of veterans and their families. There is a timeline of events from 1775 to the present, a portrait project by combat photographer Stacy Pearsall, films honoring the service and sacrifice of veterans, and 14 thematic alcoves that lead visitors through stages of service—from leaving home to combat to returning home.

A short film chronicling the legacies of veterans John Glenn, the late John McCain, and Illinois Senator Tammy Duckworth discusses the value of service, and the final film, which is featured in the Service and Citizenship gallery, emphasizes an important theme of the museum: connecting military service to the broader idea of public and community service. “People are going to see that final film, the last thing they see in the museum, and they are going to want to reach out and do something,” Taylor says. 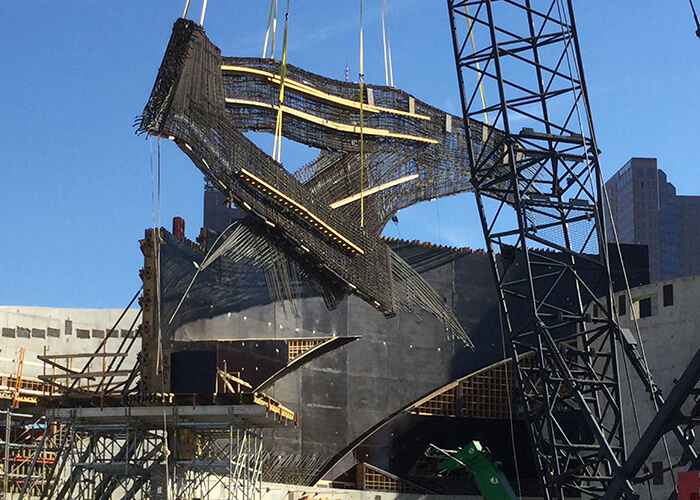 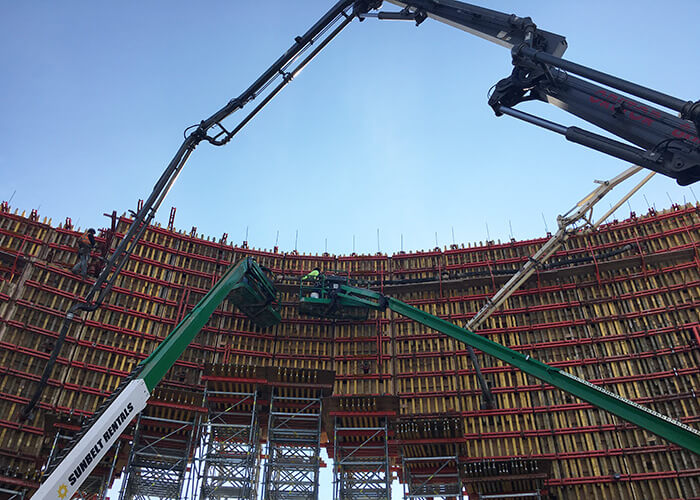 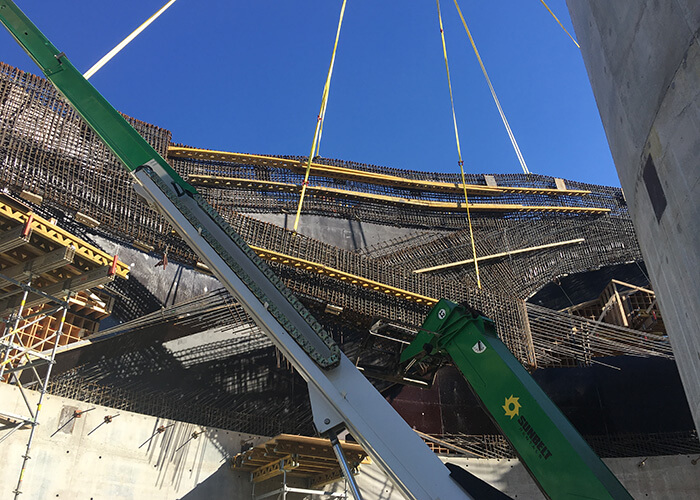 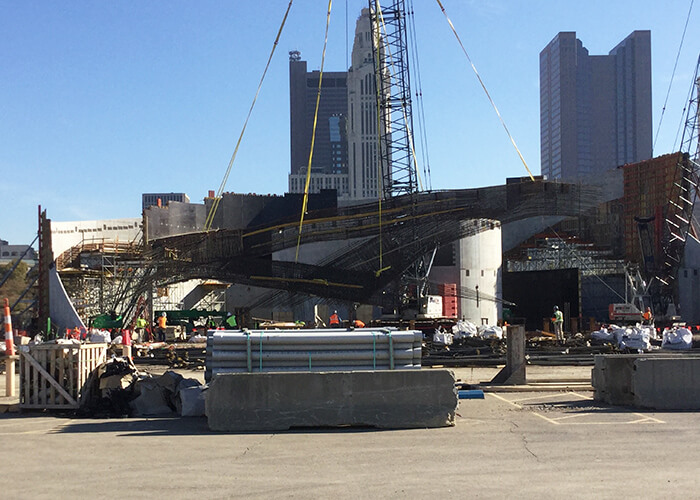 Outside, visitors find a place to decompress: A 2.5-acre Memorial Grove includes a cathedral-like canopy of American elms, a Purple Heart Memorial and Soldier’s Cross Memorial, and a stone wall with a series of waterfalls that fall into a reflective pool. Though designated as a contemplative space, the grove is intended as a green respite, a place for visitors to refresh.

“It’s not about death; it’s about life and serving the rich landscape and neighborhood; a place where people can show up with kids or have a picnic when in town from a long ways away,” Olin says. “It’s a very soothing thing, the sound of the water.”

The Complexity of Curves

Kevin McGuire, BIM (Building Information Modeling) coordinator for Baker Concrete Construction, says, “the geometry of the super structure alone was remarkably complex, consisting of intricate concrete arches that were curved in both the vertical and horizontal planes.” In order to dissect this complex information and present it in a constructible format, the team used Autodesk AutoCAD software to calculate dimensions, pinpoint locations of each opening and embedded steel plate, and extract the vertical concrete faces and flatten them to create templates that were used to detail, fabricate, and install the reinforcing required to support the building.

“Since the contract documents had very few dimensions, the architects provided the model; it was reworked and coordinated with each building trade,” McGuire says. “We couldn’t have done this project without AutoCAD modeling software; the model, once geometrically approved by the architect, became the legal contract document to the building.”

The building’s curving, undulating geometry made layout extremely difficult, McGuire explains. “To solve this, we used Autodesk Point Layout, which allowed us to set up job control and export points directly from the model to on-site robotic total stations, from which field crews could build to the exact coordinates in the model.”

For Lieutenant General Michael Ferriter (US Army, retired), president and CEO of the museum, the end result is a national treasure where the commemoration and honor of veterans’ service will resonate far beyond its walls. “This is a platform not just for the 300,000 visitors a year in foot traffic, but through digital learning, traveling exhibits, and online content, reaching a potential audience of 3 to 5 million people,” he says. “Now the spirit of innovation, creativity, and nerve requisite of veterans can be brought to Columbus and infused into the community nationwide.”

Olin is equally pleased. “I think a lot of people, partly as a result of the backlash of Vietnam, still don’t appreciate veterans,” he says. “Veterans feel pretty unloved, and the idea of doing something concrete for them meant a lot to me.”